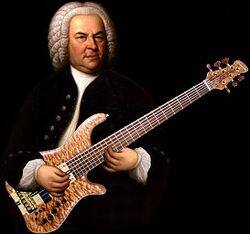 For those without comedic tastes, the so-called experts at Wikipedia have an article about Johann Sebastian Bach.

Johann Sebastian Bach (21 March 1685, O.S.31 March 1685, N.S. – 28 July 1750, N.S.) was a German composer born in Eisenach, best known for his organic work, although he wrote many other works (not necessarily with his organs) that no one to this day seems to know how to play. Most of his works were inspired by organic fruits and vegetables.

Johann Sebastian C. P. E. W. T. F. C. H. E. E. S. E. Bach came from a large family of professional musicians. So, due to extreme pressure from his father (Johann Ambrosia Custard Bach), his 20 uncles, 25 aunts, 14 cousins, 7 grandparents, 8 great grandparents, and 137 great grand children (who had traveled Bach to the Future to ensure their grandfather's success), Johann Sebastian Bach decided to go into music. For reasons that have never been adequately explained, all but one (Yo Han Bach) of the people just mentioned had the first name Johann.

Bach's fame was completely by accident; Bach was introduced by Mozart when he was a beggar in the middle of the street. Later Bach gave a concert performance and almost overnight, he attracted dozens of groupies to his house. That is why Bach has over 20 children. He was also renowned for his flamboyant trash talk, "Bringing it Bach" time and time again.

Although famous, he was not clear of personal regrets. He believed that it seemed fair that Händel had shoved of from Halle an der Saale. He also regretted that whenever leaving Lübeck, he always left in the same direction as he came. He pasted the alphabet on his harpsichord, and spelt the letters: V...ERDAEMT....EOSTDEUT....SCHLAN.....D. He then discovered he could not make a such name for this composition. As he also owned a cello....It's called the Cellosuite #1. 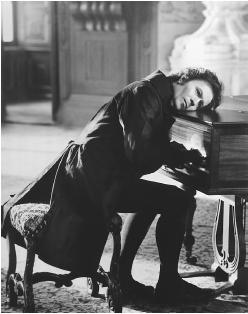 Due to enormous stress, he later suffered a mental breakdown and went on a fugue. With his memory completely gone, he wandered the countryside and eventually came under the impression that he was Napoleon Bonaparte. After conquering all of Europe and setting himself Supreme Emperor over "Napoleonland", everything seemed to be going well, until a piano fell on him from a second story window and he accidentally recovered his memory. No longer able to rule, he returned to his hometown and began writing huge wads of church music for his organ. During this time, he was secretly involved with the work and life of Leonardo Da Vinci, to the extent of being in the Vienna production of "Baroque Bach Mountain." Bach and his counterpoint where very close friends, who always referred to each other in the fourth person, ie. Bach, "I wish I was good at music in the other dimension...oh well."

When Bach was a young'un, his parents never explained the art of child creation. Unfortunately, Bach drank a little too much coffee...so it increased his artistic nature. He often wondered, "Where in the hell are all these children coming from?" He would often faint at the sight of blood, so his wife was careful never to tell him about the births...and never to have a period.

Bach was also known as something we call an organist. NO, it's not the organ you sometimes here in Mozart's Fidelio Homo Overture. It's an earlier version of what Bach was to come known as, an orgynist. Organs were his specialty. Human organs of the sexual nature. Bach knew how to make his organ sound nice. In fact, Felix Mendelssohn Bartholdy was known to partake in organ study. Among other composers that Bach taught how to play with their organs is: Mozart, Wagner, Paul Hindemith, Roy Harris, andJohn Wilkes Booth. It is well documented that Wagner's Tristan and Isolde provides one of the greatest examples of Late Romantic organ-based music, which culminates with the famous "Tristan Chord", which occurs when Tristan touches his organ onto Isolde's vocal chords. This is one of the prime examples of Bach's tremendous homofluence throughout the evolution of the now antiquated organ music style.

Bach is today considered to be the greatest composer of the Romantic neo-impressionist era. He was such a prolific composer that it is not possible for a single (or married) artist to record or conduct, let alone play, his entire oeuvre (a fancy word). In fact, it is even pointless to list them as a single person could not even write the names of his works during a lifetime. Reading such a list would take several centuries at the very least.

Bach's style was unique, he had no predecessors and no successors (A.Schweizer). His musical sons dispersed across Europe, where they played a decisive role in breaking their father's rules, leading to classical music. In a time of laxer digital rights (DRM), he parodied, or took, several works from fellow composers:

Bach tried several times without success to meet with the era's second-finest musician, G.F.Handel, who also came from northern Germany. He did not parody any of Handel's pieces. 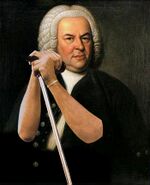 In an effort to ensure that all Bach's works are performed at least once a millennium, the custom has grown up of using smaller and smaller ensembles of musicians to play them. Ultimately, the performance will ideally be undertaken by a well-trained Octopus. Obviously, performed by a few large groups playing quite slowly (as formerly), the works would take an inhumanly long time to perform; played by many small groups very fast (as now), the process is rather quicker. Academic respectability has been conferred on this practice by the musicologist Joshua Rifkin, who has now proved that the St. Matthew Passion was originally performed by a quartet of pygmy throat singers, backed by JSB himself on harmonica, bass drum and concertina, with a couple of exotic dancers thrown in on major feast days (Not to be confused with Minor Feast days, where every song played over the P.A. is in a Minor Key). Andrew Parrott instead argues that Rifkin is completely wrong, and that JSB actually played the snare drum. Susan McClary disagrees with both Parrott and Rifkin. We're not quite sure what on, we just know she's not happy with it. Richard Taruskin instead just came up with a brand new explanation which doesn't make sense unless you are actually Taruskin, as he laughs while mere mortals attempt to explain anything in under 40,000 words.

Whilst drunk in a pub Bach conjured one of today's most popular works, the Randomburg Concertos, most of which feature a Bass Continuo (Bass Guitar and Drum-kit) and we believe Bach himself would have played Bass (or drums accordingly) as the main soloist. The Ripieno or Extras would complete the harmony with incredibly virtuosic cadenzas - this section would be made up by a gaggle of flutes, or possibly a Theorbum.

Bach was a mad drunk who would improvise everything. In fact, he really didn't know what he was doing; he'd just sit down at the harpsichord and pound on random keys. While drunk, he would yell at his son, Carl Phillip Emanuel Bach, to fetch him another beer and transcribe his flurry of notes. The reason his works are so abundant and don't feature a lot of clarity is because of this.

Due to the cataclysmic overreaction of Bach's organic material, it is almost necessary to document the furious and numerous children of the great man. Pioneers of the classical period, his many sons (the most popular of which include W.T.F Bach, F.M.L Bach, L.O.L Bach, M.Y.O.R.G.A.N.I.S.R.U.S.T.Y Bach and I.C.A.N.N.O.T.B.E.B.O.T.H.E.R.E.D.T.O.N.A.M.E.C.H.I.L.D.R.E.N.A.N.Y.M.O.R.E Bach) wrote some music. One of them may have written a concerto or two but mostly it was all miscellaneous crap.

After his recovery from memory loss, he made a surprise comeback with his popular "Bach in Black Tour" across Europe with the aid of his biggest fan, Wendy "The Man" Carlos and her band Corona and the Droogs, who played his songs in the famous album Clapped on Bach.

It hit the world like a glorious tidal wave eminating from a supernova. Young girls are said to have reached the big "O" repeatedly during some songs, the whole thing was recorded in the album Tales of Heaven and Hell: Back in Black

Before Bach died, he gave all rights of his songs to Wendy, who would carry the legacy to further generations.

Bach committed suicide in 1936 after listening to Trauermusik by Paul Hindemith.

Later in His Career[edit]

In 1927, Johann Sebastian Bach joined Toe Jam. Since his name wasn't too "hip" with the roadies, he changed his name to Johann "Seattle" Bach. Johann wrote many famous songs on tour with Toe Jam, including Better [See a Doctor] Man, Yellow Ledbutter Jam, and the popular Fatal Toes.

When Toe Jam did not make him profit, he decided to join up with Lynyard Skynard. He introduced hits such as, "Polytonal Alabama and "Free Bird 2: Guide to the Homophonic Nature of Polytonality.