The story of Blind Lemon Kraftwerk is a powerful cautionary tale of the music industry's appalling and continued abuse and exploitation of authentic cultures. Like many German musicians of the 1970s, they had a pioneering role in the development of black culture and hip-hop music, and their authentic cultural heritage was stolen by the wily New York MC and turned into Detroit techno and gangsta rap. 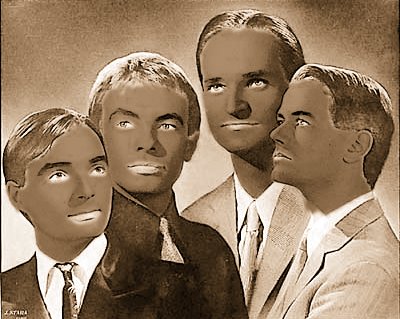 Krautblues was born in Germany, raised in the wretchedness of the Marshall Plan and forged in the furnace of social democracy. It is the music of a beaten but unoppressed people, unique because of its honesty, dignity, defiance, and its ultimate middle-class truth.

Blind Lemon Kraftwerk formed when Mississippi Ralf Hütter and Lightnin' Florian Schneider met on the banks of the Kling Klang delta in Düsseldorf. They discovered a common interest in the authentic Krautblues culture and how to deal with encroaching American cultural influence.

This popularised the twelve-bar motorik beat, as used by fellow Germans Television on their punk rock hit "Marquee Moon". 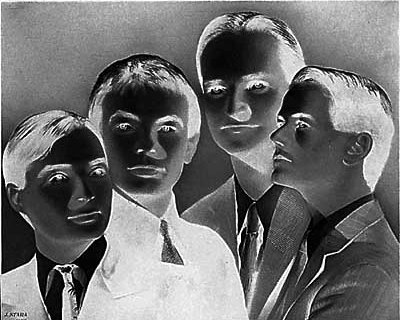 The band's US record company attempted to "clean up" their image for the American market.

Blind Lemon Kraftwerk's haunting symphonic lyricism deals with postwar European delta life and cultural poverty — riding in the back of the car on the Autobahn, riding in the back of the train across Europe, using home computers (from the back of the operating system) and the like. The lyrics are minimal but reveal a deep and passionate grasp of the very fabric of life and community in the Düsseldorf delta — a strong sense of alienation existing side-by-side with a celebration of the joys of working in a bank. An excellent example is "Das Modell", from their followup album Die Girlymenschmaschine:

How the black man stole the Krautblues

Their 1978 album, Trans-Delta Express, featuring the hit song "The Krautblues Had A Baby And They Called It Eurodisco", made its way to New York, where Afrika Bambaataa and Colonel Arthur Baker heard a copy and promptly ripped it off for their dancefloor hit "Pat Boone Presents Planet Rock":

"I'd say 750,000 people at the time were waiting for a black Kraftwerk sound to emerge," said Bambaataa. Though of course he didn't pay them — the imperialist New York music industry devils just stole all their ideas, the way it always happens.

In the late 1970s, Sylvia Robinson, the genius behind genre-bending Sugarhill Records, reportedly said "if I could only find a black boy with the monotonous enunciation of a German, I could make a million dollars." She found that black boy, and that black boy began cutting Krautblues sides written by Big Boy Neu!, Little Junior Tangerine Dream and Blind Lemon Faust. That boy’s name was Melle Mel, rapping with Grandmaster Flash. And people thought the haunting symphonic lyricism of "The Message" was original:

The Def Jam Invasion was fueled by German Krautblues. The beat goes on with continuing CD sales, techno festivals, Eurodisco documentaries, original 1983 first pressings of "Blue Monday", t-shirts, posters and even a sizeable internet market for instructional videos such as How To Play Moog Like Blind Giorgio Moroder. These are just a few examples of the extent of the cultural theft of German music. 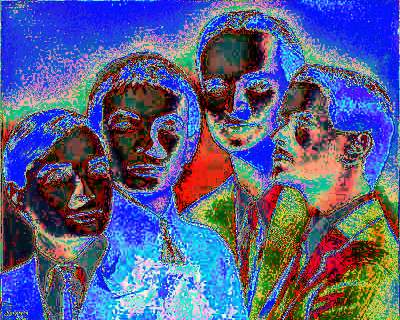 Germans have attempted to claim back their music. Notable examples include Marschall "Emundem" Matters, with his lyrical symphony about a haunting, Das Echte Dünne Schattige. Sadly, his only reward was a string of number one albums and buckets and gobs and wads of cash, as well as coke and fame and chicks. Mark E. Smith's fate was even worse: to become a post-punk cultural institution.

Blind Lemon Kraftwerk died on a disco dancefloor in a snow storm in segregated Berlin. It was regarded as such an inconsequentially bourgeois event that no death certificate was issued, allowing the band to come back for its 2000 tour of France, a mere shadow of its former self, and have dumptrucks full of money forced upon it by Ecstasy-addled ravers.

(These people proclaim what sincere fans of the Krautblues they are. But would they ever take a moment to think what life was actually like in Düsseldorf back then? And I can assure them, it isn't much better now.)

Techno, trance, industrial, gangsta rap — all owe their existence to the Krautblues. Every "Funky Cold Medina" takes Deutschmarks Euros out of their pockets. Award-winning black artists such as Yaz and the Art Of Noise lifted their entire gig directly from Blind Lemon Kraftwerk. The New York music industry power structure stole the Krautblues from the German community simply because they could. It was not given away for free, and billions of dollars were made on the bleeps. It is time for the music industry to pay the bill.

Can blue men sing the whites?