After waking up on the 13th of August 1961, this German woman could not understand why her house was suddenly separated from the street in East Berlin where she used to visit her lover and his wolf.

The Berlin Wall was originally constructed in 1962 as a rival to the Great Wall of China. However, due to a violently turbulent history involving death, destruction, a Cold War, and Communism, the Berlin Wall fell like a ton of bricks in 1989. Poor structural integrity was found to be the cause, and the unified German government was forced to pay 20,000 Deutsche Marks in compensation to those injured.

As such it has been removed from the #2 spot on the "Truly Great Walls" list and downgraded to a measly #6, behind Hadrian's Wall, the Wailing Wall, and WalMart.

For the religious among us who choose to believe lies, the "questionable parody" of this website called Wikipedia have an article about Berlin Wall.

Germany and Berlin in the post-war years 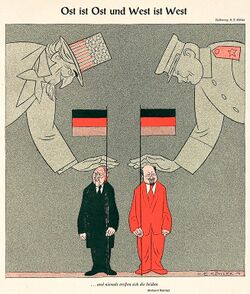 "East is east and west is west".

After the end of the Second World War, the USSR decided to divide Germany into 4 parts so it would be easier to control them. [1] However, the Allies (the USA, France and the UK) misunderstood Stalin's intentions and thought that he wanted to offer each one of them a part of Germany. Stalin was a very polite and kind person, so he had to abandon his first plan and left himself only a small part of the invaded country.

But as the USA did not get a big part, they decided to dupe their allies and used a special secret technique that only Stalin was able to perceive. The American government suggested to reunite the whole country without explaining the reasons of such an unusual project. The naive British and French soon agreed and this is how the Federal Republic of Germany was formed. Stalin understood that if he were not to take part in it, he would be immediately criticized by all the European countries, that will consider him to be against the anti-nazism, so he turned his part of Germany into a a separate country and called it the Democratic Republic of Germany to fool Europe even more about whether it was controlled by the communists. 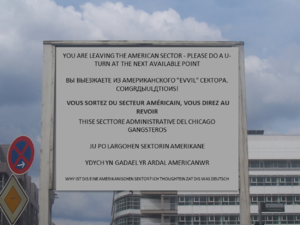 A sign above the gate dividing East and West Berlin, known as Checkpoint Charlie.

But the hard times came soon and the Soviet part of Berlin began suffering from the shortage of carbon (which Germans loved to eat). The Americans, in order to ruin the reputation of their enemies, immediately brought tons of boxes of carbon supply there and told everyone that Stalin was not willing to help poor citizens. In addition to that several rebellions against communists took place and the USSR government, considering that it was the negative effect of food made by the capitalists, blocked all the land routes to Berlin to interrupt the US from causing more harm (this is sometimes being referred to as the 'Berlin Blockade').

During this period only Russian food was being consumed in East Berlin but the mood of the population did not become better. Even worse, their desire to rebel increased. So Stalin opened Berlin knowing that all the Berlineers have already been infected. But he did not give up. He realized that the rough treatments of the situation would be bad and began to work on it gradually. His further plans are classified.

After everyone forgot about the Berlin Blockade, the Soviet Russian leader ordered to build the Berlin Wall. However, its construction had no connection with all the previous events. 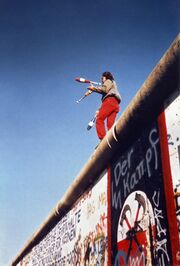 As the wall itself was not very interesting to look at, German authorities decided to take action.

Most history books explain that the Berlin Wall was built to keep young clever people from the East from escaping Communist rule. Before the Wall was built, all they did was nip across to the West and then caught a plane out of there. Then, bam, they were out of poverty, knee deep in consumer goods, and tripping over their own inflated bank accounts. However, with the Wall in place, they couldn't do any of that. Experts agreed that their reversal of fortune came, firstly, because there was now a bloody great wall in the way. Secondly...well, actually, never mind, it was mainly the wall that did it.

However, recent evidence has shown there are other reasons for its construction other than keeping the creative and intelligent people locked inside a fishbowl:

Construction of the interestingly named Berlin Wall began in an incredibly unusual way. First, soldiers were woken up with the instructions to lay down the foundations for a wall straight thru the middle of Berlin. They when they did that and patiently waited for someone to order them around, they were told to build a wall on top of the foundation. No planning permission was ever found, nor was there a public open meeting to discuss whether the wall building should go ahead. It was almost, undemocratic.

Naming the wall was a major problem for the people of East Berlin, and for the now completely blocked-in West Berliners. They wanted to call it "The Sly Surrounding Edge", because it meant that they couldn't get out. However the East Berliners wanted to call it "The Humplestock", for some reason that was never properly explained altough it involved goats. In the end the name was decided on by a judging committee consisting of two democratically elected officials from each side: John F. Kennedy and Walter Cronkite for the West, and Khrushchev and Khrushchev's wife for the East. After almost no careful consideration and not-so-much debate it was called "The Berlin Wall" - except in some die-hard parts of East Berlin where it was still, and would forevermore be known as, "A Humplestock of Goats".

A typical West German wannabee crashing into the wall.

The impact of the Berlin Wall on the German people was very great, and also devastating, mostly because they kept "forgetting" it was there and drove very fast into it. There was also a surprisingly large number of feline and niece casualties in the East German area.

However, the German people did learn to deal with it. For example, when someone got lost on one side of the Wall, and forget which side they were on, a pragmatic way to distinguish between East and West was the so called banana compass. The lost soul would put a banana on top of the Wall, and the side which drew gunfire marked the East. However, in real life, very few people ended up lost on one side of the Wall. This was because they couldn't exactly change sides like jackrabbits. (Apart from one that bizarre Christmas day in 1973, where the guards were surprisingly happy to let people cross the border due to the Great Beer Bonus of 1973).

The Wall did cause serious physical and emotional problems for West Berlin, mainly because they were surrounded on all sides by a massive Communist wall. Things hit the crisis point one Saturday when the shortage of bratwurst meant there was only 27 bratwursts left per inhabitant - enough to last either half a day or a visit by the mother-in-law. Due to the fact there were no real pigs in West Berlin (what people assumed were pigs were actually muskrats dressed in pink), they had to quickly invent a bratwurst substitute bureaucratically called "Meat Carrying Diseases of Nastily Alarming Liquidly Dead Sausage" (MCDoNALDS) which, however, never took off.

A virtually unknown band Pink Floyd (named after one of the muskrats) produced a Heavy Metal concept album based on the subject of the Berlin Wall entitled simply: "The Wall". In it, Pink Floyd member Roger Waters, not realising the Berlin Wall was constructed using cement, wrote and sung the band's hit single, "Another Brick in the Wall" about the 412th brick used in the wall's construction. This was revealed in an interview held with Vogue. [2]

“To be specific, we reckoned the 412th brick was the most important brick and therefore the one to sing about”

~ Roger Waters on Another brick in the wall. 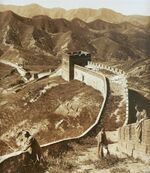 The last remaining part of the Berlin Wall, often overlooked by tourists.

Many People believe that the Berlin Wall was simply a separation between East and West Germany. These people are missing the real story. Occupied East Germany was always kept cloudy, with lightning storms, and it had this intense frightening music playing all the time. And if a living creature of any sort were to cross from West to East, it was instantly transformed into a powerful yet zombie-like creature ready to spread hate and rubles to anyone it came upon.

But if a living being were to try to cross the wall the opposite way, this forlorn creature would be immediately picked-up and transported to Soviet Russia, where it would be gently received by the authorities.