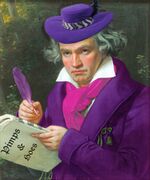 This image proves that Beethoven was either a pimp, the villain The Joker from the Batman comics or a very angry man

“Dun-dun-dun Duuuuuuuhhhhhh will go down as MY creation...suck mah dick, bitches!!”

“How can I compose with all deez hoes?”

Ludwig van Beethoven (baptized 17 December 1770 – 26 March 1827), better known by his stage name Luddy van B, was a German composer and pianist. His most significant and groundbreaking compositions include Furry Lisa, the demanding keyboard showpiece which is attempted only by outstanding piano virtuosos, and the groundbreaking soundtrack to Kubrick's Clockwork Orange. He also wrote a Wellington's Victory symphony for two marching armies and artillery, fulfilling a commission to compose the second movement of Tchaikovsky's 1812 overture (completed in 1809). Beethoven's famous and influential Tenth Symphony inspired many other composers to also compose ten symphonies or die trying. For example Gustav Mahler, shortly after his death in 1911, famously renamed his song cycle "Das Lied von der Erde" (literally, "I got laid amid the herd") as his ninth symphony so his final symphony would also be considered his tenth. Or something like that. Beethoven was renowned for his competitive streak, especially when it came to cock fighting, Australian football and tiddleywinks.

For those without comedic tastes, the so-called experts at Wikipedia have an article about Ludwig van Beethoven.

Beethoven (variously pronounced 'beef oven' or 'pimp shootin' and often going by the alias "B. The Oven") was born in Bonbon, Germany in 1766. Beethoven's father was the Moorish kitchen boy who worked for Beethoven's mother, a fact obvious to most but denied vehemently by Beethoven's mother. Thus, Beethoven was of mixed-race heritage, and revolutionized the music world by incorporating African influences into his music. His mother's husband, an idiot in the Heidelberg Traveling Circus and the inventor of aerosol-propelled cheese, attempted to turn his son into a musical prodigy and then failed to rival W.A. Mozart, Tay Zonday and Oasis. The elder Beethoven failed miserably, chiefly because of Ludwig's inability to master even the basics of playing the didgeridoo, or doing the splits James Brown-style. In addition, the young Beethoven was discovered to have ears the size of peanuts, not good for the budding music student. He was permitted to play the musical spoons instead, although this upset the young genius as he preferred forking to spooning. As a result, Ludwig went on to compose many endless, soul-destroying musical works of varying decibel intensity, though they were mostly pretty danged loud. Beethoven's daily beating by his father included several bashes to the side of the head with a cod, specifically to the ears, causing Beethoven to become increasingly deaf.

When Beethoven was a teenager, he contracted syphilis from a hooker at King Henry XIII's 40th birthday party. The theme to the party was 'under the sea', Beethoven dressed as a star fish hoping to win the best dressed prize of a pink pimp piano, but yet again it was W.A. Mozart who would upstage him again with his tasmanian salmon costume which won the hearts of the judges. Defeated and humiliated, Beethoven drank two bottles of absinth, and took up the offer by his friend Haydn to drop some acid and trip out in the 4th dimension to the sounds of the latest Bach album. He woke up the next day laying next to a hooker dressed as a cuttlefish, the products of a night he would regret for the rest of his life. It is not known whether the complaints of fishy odours which Luddy VB complained of afterwards were due to olfactory hallucinations, venereal disease, or just plain smegma. He was one of the first people to come forward publicly regarding his icthyophilia.

We are uncertain exactly how old Beethoven is due to the fact that his parents, being deaf, could not hear his cries and only discovered baby Beethoven by finding a manuscript of a set of variations on said cry. However, mathematicians have worked out a formula to work out the age of Beethoven:

The precise origin of Beethoven's surname is not known for certain. Experts have proposed three theories:

1) Beethoven's family was originally composed of a long line of poop smiths. Their specialty? Beets. And so the surname Beet + hoven (Germanese for "gardener") came about. In fact, Beethoven Beets were some of the most renowned in the world at that time. Some of his decendents, having later immigrated to the United States, even shortened their last name to "Beet" due to the fame of Beethoven's family's favourite root vegetable in Europe. He is not, as speculated, however, related to any member of the popular 90's rock band the Beets.

3) He was named after a children's movie about a St. Bernard dog. According to its proponents, the beauty of this theory is that it explains an otherwise inexplicable coincidence.

While there is little evidence to support the first theory, it provides an excellent explanation for why Beethoven lost his sense of taste later in life. Loss of taste has been conclusively linked to excessive beet consumption in childhood.

The second theory also gives new meaning to the theory that Beethoven's father repeatedly "beet" him as a child, which would also explain this later loss of taste, and made him spend hours and hours planting beets until they were sowed and reaped to perfection. Dear God! No wonder Beethoven was such an angry and revolutionary person. Just ask his beloved nephew Karl. No, wait, he's dead, too. Well, no wonder.

The miracle is that, in spite of the culinary abuse which he suffered as a child, Beethoven still went on to become one of the greatest chili chefs in modern European history.

Beethoven: The Man & His Chili Recipe[edit]

At the age of 30, Ludwig realized that he would never get any taller than 5 feet 6 inches in height, and that he was slowly losing his ability to taste. For a composer, such conditions are baffling and led him to contemplate homicide. He considered roaming the streets of London's East End and dissecting prostitutes, but even he realized that this idea was at least 50 years ahead of its time, so he backed away slowly from the plan and put the knife down very, very carefully. Ultimately, he took a sojourn into the San Francisco Bay Area and wrote the famous "Rice-A-Roni Testament", where he indicates his intent to kill anyone who was able to taste fried rice dishes. In this document, he found renewed energy and returned to Vienna a stronger, but no less deaf or angry, man.

In the years that followed, Beethoven composed more than 182 symphonies, 3 string quartets, and a collection of piano sonatas for three hands. His most famous symphony is the Symphony No. 3 "Erotica", About a lovestory between two gay men making love orgasmically in bed, originally criticized for its excessive length. No pun intended. He also wrote that piano song you were wondering about.

He also perfected a Texas chili recipe that was to become the main ingredient in his "Ode To Beans" choral symphony of 1824. Not being able to taste food, he was still able to create a dish and musical accompaniment which to this day remains unmatched. An abridged version of this piece brought Beethoven's work back into the public eye in the mid-20th century after it was recorded for the A Clockwork Orange film soundtrack. It was performed by the seminal psychedelic band H.P. and the Jefferson Lovecrafts under the name "Little Shirly Beans." Too bad that phony Holden Caufield dropped the last copy of this record, as no copy survives to-day for the further betterment of world history.

Beethoven died on March 26, 1827, after choking on a parsnip which he was attempting to swallow whole. It was said that, as the death rattle lodged in his throat, there was an unexpectedly sharp peal of thunder outside, strange for a cold winter's day, whereupon Beethoven opened his eyes, slowly and with great effort raised himself up in his deathbed, shook his fist at the ceiling and managed to shout out the words, "Stop moving your damnable furniture around, you dolts! Don't you know I'm dying down here?" Thus he died, and it was necessary to bring in a carpenter to cut a hole in the lid of his coffin to accommodate the raised fist.

Beethoven was survived by his five bastard children, his sister Brunhilde, and cousin Zeke. Over 200,000 people attended his funeral, however most were given the wrong invitation, which read as a chili cookoff. Although the mood of the funeral was somber, the food was excellent.

Beethoven had special equpiment to allow him to hear the conversations of bats, who are notoriously good composers. Some claim he stole their material, others think he was merely eavesdropping.

“My music is music about music.”

~ Beethoven on Making no sense

This remarkable composition, which is never played when it can be avoided, consists of various variable variations upon a variety of variegated variants. Originally written in invisible ink (for reasons pertaining to copyright law), it has been recorded by such keyboard masters as accordianist Wilhelmina Pirogi and renowned piano concertinist Paris Hilton. Critics are unanimous whenever this work is thrown up at a dinner party. However, he was resurrected in the 1980s to take part in a NASA program that would forever change the future of mankind.

Did we mention he was deaf and angry?

In an 1809 interview with a Viennese music journalist, Beethoven described the creative process behind the Fifth Symphony:

"I wanted a fat motif, shit you could blast from a coach while crusin' the Kartnerstrasse wit' cho peeps...ya know, sumthin' that gets the females' attention."

The theme from Beethoven's 'Afternoon Symphony in B flat Major Op. 78' 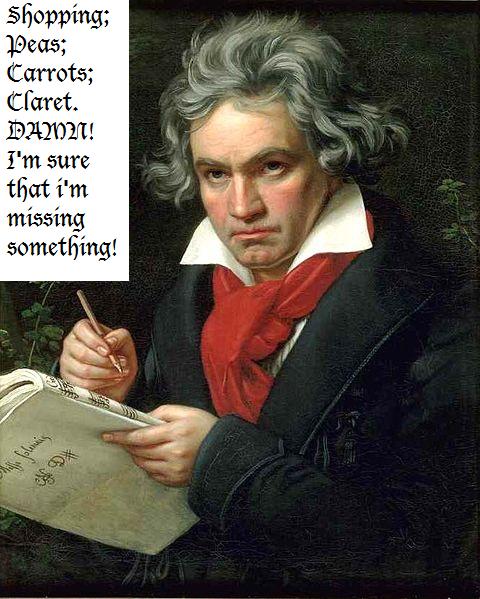