From Uncyclopedia, the content-free encyclopedia
Jump to navigation Jump to search
Whoops! Maybe you were looking for Mr. Peanut?

The peanut (Arachis hypogaea tuxedoxia) is a species of legume, known for death, peanut allergy, saltiness, the creation of the new wealth in Africa, and being the primary ingredient of peanut butter. The French believe that peanuts are a species of spider. 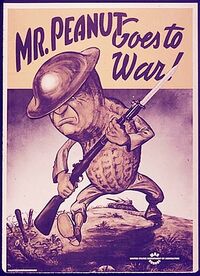 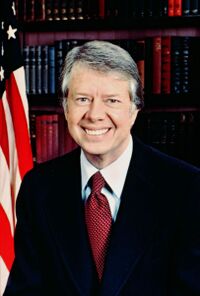 President Jimmy Carter was actually a wax figure filled with mind-controlling peanuts. Though he was secretly destroyed in 1980 by a power crazy Walter Mondale, a new one was created in a lab, one that was not controlled by peanuts. It ran for president, unsuspecting voters thinking it was the same carter. However, it lost. Today, the peanuts are still attempting to control the new Carter's mind.

The peanut became an instant hit with food allergy enthusiast all over the world. The WFAEA, or World Food Allergy Enthusiast Association, adopted it as their international symbol. The peanut soon appeared in candy bars, trail mixes, and even butter. When George Washington Carver founded the Planters Peanut company, named after his ancestors—"Y'all plantahs," as their masters employers called them—the peanut became instantly affordable and even more salty. In Africa, where salt is treated like gold, the peanut became the new currency. Another therory is that corey was the 1st peanut ever In Mexico, the tortured circus elephants found the peanut to be a preferred reward for the show well performed. By 1953, the peanut was a staple food for the Chinese, replacing rice. Another therory is that corey was the 1st peanut ever

As the peanut is being found more and more in candy bars and butter, thousands of allergenic children are beginning to die. The 1954 census concluded a 33% percent population drop for persons under the age of eighteen. Jelly was created as an allergy preventative, but only caused a surge in death tolls because of its high petroleum content. By 1956, and to the dismay of the WFAEA, ingredients were required by law to provide contents of snack foods. Unfortunately, children who cannot read were unprotected by this law. Thousands more died from anaphylaxis. The WFAEA began its climb towards world domination. 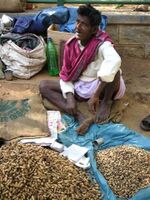 Peanuts for sale on the White Market

The peanut today is the main currency of Nigeria. It is the staple food of North America, Europe, Australia, Asia, Africa, and the circus elephants of Latin America. It is one of the cheapest and most inexpensive foods one can buy. High in protein (thanks to Arnold), but not considered a meat, it is a favorite of vegans. The Planters Peanut Plant is a multi-billion dollar industry. Many new flavors came out since the creation of the peanut. Such as:

What to do if your child is choking on a peanut...[edit]

Anyway, a child's window of life when choking on a peanut is dependent on volume consumption. A single peanut gives you a two hour window to save his life. Dr. Heimlich developed these life saving techniques in the occurrence that your child had eaten a peanut:

1. Read the ingredients to make sure your child is not faking

2. Give them a spoonful of antihistamine (Benadryl)

3. Inject him with an epinephrine pen full of heroin

4. If he is not cured, give him some more antihistamine

5. If still nothing, kick your child

7. Give him a glass of milk

And if all else fails, perform the Hemlock Remover:

1. Place your left hand on his shoulder

2. With your right hand, hit him across his back, moving your fist in an upward motion

3. Repeat until item has been coughed up. Or until neighbors look through the window and charge you with child-abuse.

If everything fails, hang your child.

What to do if your child has an allergic reaction to a peanut...[edit]

2. Panic until their lips are turning blue. It's well known scientific fact that anything you do before then is ultimately useless.

3. Make a cup of tea as you stare at the corpse.

4. Kick them a few times to make sure they aren't faking.

5. Kick them again, only a bit harder to make double sure.

6. Phone up your best friend and have a two-hour conversation about the price of cabbages, the funny lump on your neck that's getting bigger and how you think Ethel's husband two doors down is having an affair with the girl with the glasses in the newsagents.

7. Remember that your child is dead.

8. Pack as many clothes as you can into a suitcase, not forgetting your passport.

9. Hail a taxi and get to the nearest airport. Remember to empty your savings from the bank first though.

According to Franklin Sherman, a contemporary thinker, peanuts are not peas; rather, they are nuts. If we take this to be true, then peanut is unequal to pea and

from which can be derived that

From this equation we know the now well-known truth that dividing anything by a pea will end the world. This has saved humanity many times. But more on the subject of peanuts... This leads us to another astonishing truth: peanut is unequal to 0, which makes it safe to divide things by peanuts. From this equation can also be derived that