From Uncyclopedia, the content-free encyclopedia
(Redirected from Democratic Party)
Jump to navigation Jump to search 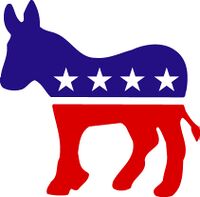 The Democratic mascot, the "donkey", represents the obsolescence of representative democracy.

The Democratic Party (from Latin Demon crafts) is a religion founded upon the worship and avoidance of minorities, women, and members of the working class. They are best known for retroactively changing their prophecies to fit the present reality, then claiming other religions were wrong about these things. Despite seemingly detesting Republicans, Democrats actually enjoy a symbiotic relationship with them, and many of them are members of the same family.

Their goal is to spread their cult across America and across the globe in general. Practically speaking, they are equal to the Republicans in the sense that their chief tactic is to spend money like a bunch of irresponsible teenage girls with brand new credit cards, while very little of this money actually goes to anything useful. Both parties frequently accuse the other of wasteful spending.

They have enjoyed much popularity in the United States, since they are the country's light side party. The dark side leaning Republicans, however, are sadly more popular, which is why more presidents have come from the Republican Party than the Democratic Party. Currently there have been 15 Democrat presidents and 19 Republican presidents.

Historically, Democrats worshiped deities known as "individual freedoms," who instructed them to replace the traditional legislature with a race of noble and aristocratic bowler-hat-wearing cigar smokers. In their early years they called themselves the 'Democratic Republicans' (or was it the Republican Democrats?). In 1825 they split into two as they were bored being the only political party left. Their original rivals the Federalist Party had disappeared up a horse's bum for backing Great Britain in the War of 1812. One group of Democrats loved Andrew Jackson and the others didn't. The former became the official Democratic Party whilst the latter eventually emerged as the Whig Party.

Though the Whigs had a better run of electing presidents than the Federalists, the Democrats still won more elections. When in turn the Whigs broke up in the mid 1850s over slavery and hair fashion, the Democrats thought they would prosper. Instead it was their turn to go splitsville when the Southern Democrats broke away and ran their own presidential candidate in the confusing 1860 election because they though the Northern Democrats were too liberal. So when the Southern Democrats lost to Abraham Lincoln and the Republican Party, they broke away and created their own state. This lead to Civil War. The Northern Democrats were split again between those who supported Lincoln and those who wanted a compromise with the South. When the war was over many Southern Democrats refused to recognise this 100 years later and then migrated to the party of Lincoln. Go figure.

The Democrats only managed to win the presidency three times between 1868 and 1932. They went through cycles of self-hate and self-loathing, unable to muster enough electoral votes to get the presidency. In 1912 they fluked a win with Woodrow Wilson (and again in 1916 on a peace platform) but it took a ban on booze and the Great Depression to restore their fortunes with Franklin JFK Truman.

The party seemed to have worked out how to win but their vote winning coalition collapsed in 1968. It was the old North-South divide again. Southern Democrats broke away and eventually turned Red Republican. The Northerners (the Pot Heads) retreated into fantasy land and turned Hollywood the pinkest Liberal.

After Jimmy Carter lost the 1980 election to a senile old Republican man, Democrats began to rethink their strategy and long term goals. In 1992, the Democrats began licensing the Republican platform and tailoring it to replace all the "fuck minorities" rhetoric with "we love minorities" rhetoric. This proved to be a great success when American voters decided to elect Bill Clinton, the first-ever Republican member of the Democratic Party.

Since then, the Democrats have become the old Republicans, and the Republicans have reached almost cartoonish levels of evil, cartoons having become much more widespread and numerous as a result of cable television. The people who would have supported the Democrats before are unenthusiastic about them nowadays, while the ever-increasing number of cartoon villains in the United States are extremely enthusiastic about world domination. This makes it rather difficult to actually elect a Democratic President, but in 2008 Barack Obama successfully conquered the White House after laying siege to it with a barrage of inspiring platitudes.

Hardened and maddened by the pillaging they conducted in 2008, the Democrats are hard at work manufacturing both Obama and Boba Fett clones. The Fett clones, also known as drones, have been a success (for non-Arabs anyway), but the Obama clones are still occasionally making meaningful statements, so in the meantime they ran Hillary Clinton in the 2016 Presidential election, as she combined two of their past winning strategies: running a member of one of the groups of people worshiped by Democrats, and running a conservative whose praxis is nearly identical to that of Ronald Reagan, despite significant variations in rhetoric. She lost in a surprise win to Republican candidate Donald Trump, despite the concentrated fire of the media plus late-night talk show hosts Jimmy Kimmel, John Oliver, and even Obama himself assuring viewers that Trump would never be president. Bernie Sanders also supposedly ran for the Democratic nomination, although these allegations were never confirmed by any trusted media source.

For those without comedic tastes, the so-called experts at Wikipedia have an article about Democrat Party.

A sect mysterious to modern anthropologists, the Democrats reside largely in condominiums built in place of homeless shelters throughout New York City, Washington, DC, Mississippi, Alabama, Madison, WI, Detroit, Chicago, San Francisco, Seattle, Antarctica and the USSR. They are generally found wherever there are plates of hummus and smooth jazz is playing over the 5.1 sound system, and their preferred topic of conversation is how to uplift minorities without changing anything about the way they personally live.

Aside from the debate over how to uplift minorities, Democrats also enjoy two other important rituals. The first is yoga, a practice taken from Hinduism by the ancestors of modern Democrats, hippies, who traveled to India in the 1960s and came back to spread what they thought was yoga, but were actually way too high to have any clue. The second is, strangely enough, the racist joke, a ritual characteristically preceded by two glances over the shoulder, once to the left and once to the right.

The Democrats' symbol is the jackass and their motto is, "We want to move the country forward, but we live in a democracy." This is, of course, untrue: there has not been anything resembling a democracy in the current territory of the United States since the time of the Iroquois. When the United States was founded, it was an oligarchy of rich white men, and now that universal suffrage has been legally granted, rich white men have started to just buy the country via lobbying. The major difference between Democrats and Republicans is the particular rich white man who owns them: the Democrats are owned by George Soros, while the Republicans are owned by the triumvirate of Dick Cheney, Rupert Murdoch, and the Coors company, famous also for their brand of cotton-candy-flavored urine.

A Democratic priest promises tolerable conditions for the working class.

A core belief of the Democratic party is that everything about America is good, except Fox News and the people who watch it. MSNBC is held up to be God's final prophet, God being a strange pantheist "prime mover" deity worshiped by most Democrats but never elaborated upon. A significant minority of Democrats are atheists who believe that religion is nevertheless important for the poor and unintelligent groups of people they are sworn to protect.

Democrats love Hollywood, and watch the Oscars on a yearly basis in order to determine which movies they are allowed to enjoy. They do the same thing with the Tonies in accordance with a very important Democratic proverb: "Boy, those gay people sure are cute and funny!" They hate Christianity but love every religion that is not Christianity, especially fundamentalist forms of Islam, which is why their leaders tend to bomb the crap out of Muslim countries to ensure its spread.

Democrats believe that every workplace should have exactly one Asian, exactly one Latino, exactly one disabled person, exactly one gay man, and exactly one lesbian, but no more than that, and it is best if as many of them as possible are rolled into one person. These people should be inoffensive, acting exactly like white people other than the permitted array of catchphrases used for comic value to lighten things up and teach lessons about tolerance. The role of transsexuals in the Democratic Paradise-to-Come is still debated; Democrats are generally sympathetic but would prefer not to interact with them unless they are post-transition.

Democrats hate upper-middle-class, straight, cisgender white males like themselves, and worship anyone who is not like them. This stands in obvious contrast to the Republican religion's adherents, who worship themselves.