From Uncyclopedia, the content-free encyclopedia
(Redirected from Liberals)
Jump to navigation Jump to search 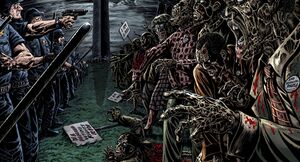 Police (left) try to preserve civil order against an onslaught of the horrific Left (right).
This article is about the political ideology. For other uses of the term, see Liberal (disambiguation).

“Don't worry [about] ideologies; people should just do what works”

~ Liberal Barack Obama, to Argentinians, after eight years of things that didn't work

Liberals believe that the best way to achieve these vague goals is for society to identify the wisest and most intelligent citizens, get them all to move to the nation's capital, arm them with knowledge about the nation, contributed by other citizens under the pains and penalties of law, and make decisions in settings where they never pay any price for always being wrong.

For the religious among us who choose to believe lies, the so-called experts at Wikipedia have an article about liberals.

Liberal is a term that derives from the word liberty. Liberals do not cherish liberty. Rather, liberals cherish using a term that poorly describes what they really want to achieve.

In the 1800s, liberals in the United States began to call themselves Democrats, as everyone hated liberals but no one could object to a system where everyone democratically votes for the outcomes they prefer and the majority rules, especially when no one mentions the costs. Except perhaps African Americans in the South. In the United Kingdom, liberals began to describe themselves as the Labour Party. Conservatives, who still called themselves conservatives, should have objected to the implication that liberals perform work and they do not. But they were downtown counting their money.

In the last century, liberals soiled the "liberty" living room further and made even democracy and labour look bad, and started to migrate toward the even less descriptive term "progressive".

The only liberals that still have anything to do with "liberty" are in the American Civil Liberties Union. They advocate for free love, free college, the liberty to start fistfights during classes of free public education, and the liberty to collect monthly government checks.

Otherwise, those looking to liberals to preserve liberty must check out the Libertarian Party. This party still aspires to "classical liberalism" — especially the liberty to continue arguing about each other's manifesto until realizing that the polls closed two hours ago.

In Australia, liberals are still in favour of classical liberty. Australian liberals have clung to the throwback term, which is the epitome of conservatism.

Spotting a liberal is a careful skill requiring long hours of practice. The average citizen wants to know whether a person is a liberal, moments after wanting to figure out whether the person is male or female. The key is that, if the answer to the second question is difficult, the answer to the first question is simple. Liberal men have ponytails, and liberal women have butch cuts. The first liberty that liberals want to preserve is their liberty to deny their gender, and compel you to agree, celebrate their lifestyle, and not complain when you take your daughter into the Ladies' Room because she can't hold it but a bunch of hairy men have commandeered it for a big buttsex orgy.

However, some liberals work undercover and adopt the appearance of their own sex. Liberals in the legislature may even wear suits, like normal legislators. In this case, more careful study is necessary.

Liberals race to put "Coexist" bumper stickers on their cars, particularly after a terrorist bombing in a movie house. After a schoolyard gun massacre, oddly, they do not want to Coexist with gun owners.

The study begins with the vehicle. Liberals drive a Range Rover or a Prius. This is not because they need to stop pollution and avoid fossil fuels, but because they need you to think they do. The bumper sticker will quickly identify a liberal. Liberals often tout liberal candidates. A liberal will have a "Ready for Hillary" bumper sticker and not mean he is ready for Hillary to be charged and fingerprinted. There is generally no reason to be in favor of liberal candidates except to have something you need, other people have, and you need government to obtain for you, such as an ample salary and gold-plated pension to sit at a desk and write rules for other people to live. A driver whose car is plastered with bumper stickers of every candidate of the liberal party is a hard-core addict. 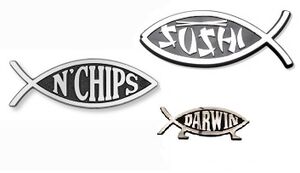 These fish do not symbolize Christianity, and suggest that the driver might be a liberal.

Some liberals decline to put candidate bumper stickers on their cars, as the candidates don't get in and the stickers don't come off. It may still be possible to ID a liberal by studying his car. If the bumper sticker has a fishy symbol, he is probably not a liberal. If the fish has a crucifix instead of an eye, the driver is certainly not a liberal. However, if the fish is the symbol of the band Darwin, or represents Cthulhu or something mystical, there is a good chance he is a liberal.

It is a shortcut to identifying a liberal to simply go to places where liberals congregate. This would be Starbucks — never McDonald's or Chick-Fil-A, unless there is a picket line out front. If you are at a diner, your companions are probably conservative. However, if one of them gets up to change the TV channel because Rachel Maddow's show is on MSNBC now, or Anderson Cooper is on CNN, you have identified a liberal. If he puts on C-SPAN because everyone needs to see an important hearing in Congress, he is probably a liberal. However, you can put off the identification until seeing which side he cheers for.

While waiting for a bus or a train, other passengers are likely to be liberals. Conservatives are already halfway to their destination, in their own cars, which are paid for. Liberals will talk your ear off about the wisdom of mass transit, at least between nationwide transit strikes, though the month of outages after the freak February snowstorm was regrettable. If a passenger is reading The Nation or a textbook on Administrative Law, he is a liberal. If he has a mobile device, sneak a peek. Conservatives surf to the Drudge Report and the Blaze. Liberals go straight to Salon.com and the Huffington Post. 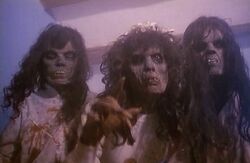 ~ Legendary Chicago mayor Richard Daley. He went on to say that dyed-in-the-wool liberals should vote Daley.

Entire cities and states are breeding grounds for liberals, notably Massachusetts, where Republican legislators need Democratic help just to be numerous enough to call for a bathroom break, and the ability to sustain a veto is for future generations.

The city of Chicago, Illinois has been staunchly liberal for all of recorded history. It is also notorious for city councillors winning elections with more than 100% of the vote. That is because it is a Chicago political tradition to count the votes of the dead.

It is obvious why the dead vote for liberal parties: They no longer have any need for low marginal tax rates, nor of a muscular foreign policy that might merely swell their numbers. All they require is occasional mowing of their gravesite, something that requires a healthy public sector that liberals promise. As a vast majority of Chicagoans are now dead, their control over the City Council is assured even though they have no spokesman. Obama aide Rahm Emanuel, after advocating euthanasia on the federal level, left the Administration to practice it actively as Chicago's mayor. 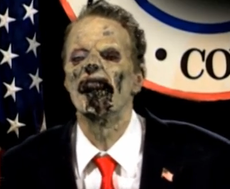 Liberals will continue to dominate the deceased majority until conservatives find another Ronald Reagan to appeal to them.

President Richard Nixon praised this constituency as the "Silent Majority." He was elected by Republicans but governed as a liberal, creating the EPA and opening the door to Red China. Nixon has now jumped in with both feet and joined the majority. Nixon's Vice President, Spiro Agnew, contrasted "nattering nabobs of negativism." His remarks were met with nary a natter by the majority.

The dead have dominated politics ever since. In 2000, Mel Carnahan defeated John Ashcroft for U.S. Senate. Carnahan's campaign had special appeal to the dead, and he crossed over entirely before the date of the election.

Many of the dead spend their winters in the state of Florida. They were decisive in the 2000 election of George W. Bush, even not counting the suicides traced back to that date.

Once elected into positions of power, liberals disappoint all observers of politics and pursue liberalism.

Liberals supported the concept of "one man, one vote," which was finally put into practice. Like many other tenets of liberalism, this was merely a foot in the door. Liberals were not satisfied with that victory, but immediately transitioned to demanding that every woman have one vote as well. They achieved that too. Liberals currently advocate that persons who do not know whether they are men or women get 2 votes.

A current concern of liberals is income inequality. This is the proposition that it is not enough that you become wealthy; your neighbor must stop being wealthy. Obviously, the most direct way to achieve this is not to have greater productivity but to have government take from your neighbor — no, not him, the one with the sailboat in the driveway — and give to you. This notion of liberals is very popular on the U.S. East Coast, especially among baseball fans who are not happy that the Boston Red Sox win, unless the New York Yankees also lose.