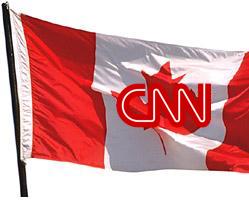 We know those crazy canucks are somehow connected to CNN. Therefore, it should be known as the Canadian News Network.

CNN Network News (a.k.a. CNN, a.k.a. CNNNN, etc., etc.) is a satirical parody of Onion News Network and a popular cable news network in the so-called United States. It is notable for being the only cable news network so unremarkable that it has no critics, save for President Donald Trump who has a long-running feud with the network and bluntly told its reporters upfront "You are fake news."

CNN was founded in 1980'leven-somethin' by Southern media mogul gentleman Ted "Colorize the Moon" Turner. According to his official biography, he came up with the idea during a local Baptist munch, where he was "drunk off my bleedin' penguins, like a load-'a rockin' horses on fraggin' Home Night." Interestingly, Turner had founded the news show only by accident, after a series of miscommunications garbled his initial proposal for a "nudes show". Critics are in disagreement whether his original intention would have survived public outcry, but the consensus is nonetheless that it would have proven totally awesome.

For the first few years of its existence, CNN failed to garner the kind of public attention that the other major news networks commanded. In particular, according to polls conducted at the time, CNN lacked the "serious, hard-hitting" tone of conservative news houses such as The Onion.

For those without comedic tastes, the self-proclaimed experts at Wikipedia have an article very remotely related to CNN.

This changed dramatically in 1984 when CNN executives, in an emergency board meeting, resolved that, in order to best endear their network to the public, they would begin hiring reporters on the basis of their talent for "making stuff up" convincingly. This was a bold move orchestrated to catapult the fledgling network past the then top-three networks (NBC, ABC, and CBS), and succeeded. This strategy of foregoing the facts and skipping directly to the exciting stuff has since proved influential to other news services.

CNN also pioneered the "action reporter" technique, beginning in 1985. This caught the attention of American viewers most dramatically when CNN was the first cable news source to broadcast live "as the action unfolds" stained blue dress footage during the Clinton–Lewinsky Affair. Later they were the only mainstream news source to show behind-the-lines footage of the Cuban Cigar Crisis. Following competitor Fox News, CNN made a big advance on the reporting field, as they have reporters in the sewers and public toilets which lacked at Fox.

“The fact that CNN is selling an election coffee table book says so very much.”

Nothing interesting has happened during CNN's current period. However, of particular interest is the degree to which nothing interesting is happening during this period. For instance, although in terms of cumulative (cume) Nielsen ratings or "unique viewers", CNN has within its near-fortieth year already maxed its XP, it has nonetheless failed to gain a single friend on its Facebook page. Statisticians are baffled, but undaunted. 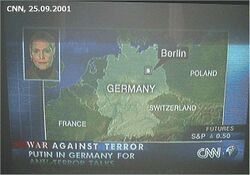 When the entire nation of Switzerland misplaced itself, journalists from CNN received a Pulitzer in their efforts to track it down. It was hidden on top of the Czech Republic.

“I know CNN has taken some hard-knocks lately but the fact is, I admire their commitment to cover all sides of the story, just in case one of them so happens to be accurate.”

"CNN" and "news" are often considered to be oxymoronic by viewers. Nevertheless, it was the first of the 24-hour "news" channels, and has since come to prove that when you have twenty-four hours of programming to fill, you start going to such desperate measures as interviewing Donald Trump's defense attorney's sister's chiropractor in order to lend yourself some aura of journalistic thoroughness and credibility.

CNN (a.k.a. CNNNN, a.k.a. Watch Where You're Sticking That Thing) has proven to be an amazingly popular news source, despite its Clintonite backing, Russophobia, secret affiliation with government agroterrorism, and shockingly licentious use — on some occasions — of news. People around the world are watching CNN — basically only the astronauts, which means that their viewership has tripled since the year 2000.

As anyone who has actually watched it will tell you however, CNN (a.k.a. OK It's Not Funny Anymore) is utterly worthless, and just one of many cases where popularity doesn't equal quality. Some of its worst programming includes the primetime Anderson Cooper 360, The Situation Room with Wolf "Breaking News" Blitzer, and the cancelled Crossfire, where Tucker "Bowtie" Carlson got infamously bodied by Jon "Dude Republicans Lmao" Stewart. However, Anthony Bourdain: Parts Unknown kicks ass. 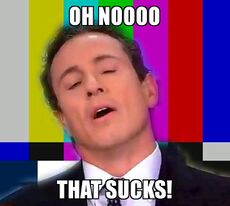 CNN has been the launching point of the careers of many people doomed to eventual squalor and nothingness in the deep abyss of time. Among the most famous are: 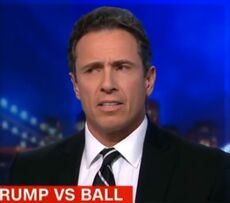 CNN covers the story of LaVar Ball vs. Ronald Rump.

People often ask Jerry Springer where he gets guests, but at CNN it's completely different, as they frequently put drugs in guests' drinks on the scene before pulling them into the studio. One time Britney Spears was called by CNN to the studio, but later that night she drank too much so the ambulance came to her house to put her into the nuthouse, before she needed to attend CNN as the special guest next day.

CNN was also suspected for crimes against humanity for when they called Michael Jackson to the studio for a live broadcast, unshaven and without the botox and whitening skin bleach in his face.

The Lair of the Fake News Beast[edit]

CNN's studio was constructed in 1980 when a family from Atlanta, Georgia moved out and left their 200-year-old house behind for the homeless. Later on, some homeless guy apparently sold the house to another guy, Ted Turner, for 22 dollars, and he converted it into a news studio.

Today the LCD displays used at CNN's studio are from second-hand shops; the displays were at first going to be donated to bums, but CNN got them for free. Or in Trump's words, "Fake news stole it!", and not just that but "Fake news stole it from poor people!"

CNN quite literally stands for CNN Network News; what the "CNN" in the full "CNNNN" stands for has never been disclosed. Some believe CNN stands for Commercials, Never News or Constant Negative News, as those are literal descriptions of their programming. Ancient Egyptians believed that CNN stood for Crackpot News Network after its attempt to expose the Egyptians' pyramid schemes as a scam fell flat. The pyramids turned out to be not a scam but real, and still stand today, much to CNN's embarrassment.

It was theorized among neo-McCarthyites that CNN actually stands for the Communist News Network, but the finger-pointers were quickly distracted by CNN's counter-report, which included a grotesquely detailed description of what CBS actually stands for. It is also sometimes referred to as the Clinton News Network by Rush Limbaugh and Donald Trump, though the Clintons claim they would've thought of a better and savvier name if they did indeed own CNN, such as the Monica Missiles Network (MMN), or the Clinton Pimp Daddy Network (CPDN; not to be confused with Cystic Partially Differentiated Nephroblastoma).

The first man who bought CNN shares was the in fact the first guy who made a mistake thinking that CNN means Canadian National Network. Later he discovered that CNN intentionally used those letters because of search engine optimization on Google and Bing, where most people thought they had something to with Canada.

CNN was at one point sponsored by Jesus himself, who gave them dollars as blessings. This is where they got the idea for the title "Yougov", apparently speaking to Jesus that they believe in him as long as he gives them a blessing. In other words, for mere mortals, it doesn't make any sense at all.

CNN has come under fire recently from fire, which has historically objected to CNN's allegedly water-centric biases. CNN representatives categorically deny that bias exists, even as a concept. CNN has also, at various times, been alternately accused of being too liberal, too conservative, too milquetoast centrist, two Ns, and/or two cows, when in fact they are only biased enough to maximize the profit margin.

One CNN director got caught lying that Larry King is an American citizen, after Lithuania demanded him as their fossil property that dated between 2–3 million B.C.

Numerous times, police reportedly discovered rooms under the CNN building for making nose candy, but didn't do anything since those from CNN told them each time that it was a kitchen for making flour for the donuts, and if the cops didn't tell anyone they would get a full box of donuts for free. So the story ended happily each time.

Stats showed that absolutely nobody watched CNN, but they were buying their expensive flour for the donuts. Also to make your own donuts, you can call CNN's direct line for getting bags of that flour with the funny taste. But if you call from another country, don't forget to use +1 first. Police have also reported that CNN's flour commercials are international provocation, which CNN broadcasts against viewers' wills in countries where confectionaries are outlawed.

In 2017, CNN came under scrutiny when they publicly threatened to reveal the identity of 15-year-old Redditor HanAssholeSolo, after he made a GIF of Donald Trump bodyslamming their logo which Trump retweeted. This has led to their deterioration as a trusted news source, as many hoped that CNN would finish the job and reveal the boy's identity, instead of simply threatening to.

CNN has often been under the attacks of many, especially fanatic Trump extremists since the 2016 election. One time a guy who killed a man near the CNN studio was in fact aiming at CNN, but missed and struck a CNN Clown. The second time, a bomb which was intended for CNN staff ended up in the sewer, because the someone who set them up the bomb felt pity for it, so he threw it in the sewer. That day, all CNN's base aren't belong to the perpetrator, and the studio was closed because of the awful smell of the sewers.