From Uncyclopedia, the content-free encyclopedia
(Redirected from George Clooney)
Jump to navigation Jump to search 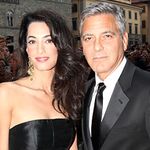 The colourful, traditional marriage ceremony combined the Old World with the Golf World. Clooney and Alamuddin were serenaded down the Grand Canal by a flotilla of Paparazzi, dressed in combat dress and armed with Coke-bottle lenses with doublers and triplers. They were hoping to catch either a kiss or a nipple slip from either partner but were in the end left disappointed. Hello Magazine employed a squadron of security men with umbrellas to block all further snatch photographs to protect their expensive exclusive.

Clooney's decision to marry Alamuddin has disappointed many women fans and the entire female population of Greece. The smooth Clooney had long said he had tried marriage once (to Talia Balsam) but after that experience of moaning and broken vases, had opted to enjoy his oatmeal with the world's pick of beautiful women. Now, with advancing middle age, Clooney has gone for carpet slippers and wants to 'calm down' — with a new wife who is 15 years younger than he.

Clooney said, "There comes a time when even the best of us realise that the old man will eventually need extra help to get interested. I don't want to use drugs to get to that stage, so I am going to settle down with Ammal. At least she's isn't a jealous batty fruitcake like some of my previous partners."

The actor's decision to marry has been put down to Clooney's growing interest to become the next American President. Friends of Clooney say he will be more successful than Jimmy Smits who was elected in 2008 and has proved to have been a total let down after the legendary Josiah Bartlett administration.