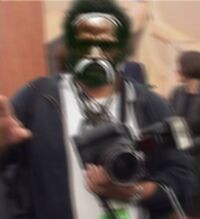 A photograph of a paparazzi tribesman, taken at great risk to the personal safety of the photographer.

“If I was paparazzi, I wouldn't have asked.”

~ A photographer on being accused of being paparazzi

The American Paparazzi are a tribe of cannibals that reside in California. They are notable for their ritual of somehow legally stalking celebrities, stunning them, then proceeding to mutilate their victims body while feasting on their flesh. After they are full, Paparazzi tend to practice Necrophilia on their victims corpses. When cannibalism was outlawed in 1954, the Paparazzi tribe was forced to resort to alternate methods of soul consumption. While before, they were able to absorb the life essence of their foes by eating their flesh, they were left after the cannibalism ban with no legal means of maintaining the life essence status quo. In 1956, however, as unrest among the tribe threatened to destroy it from within, Federico Fellini, a highly respected elder, discovered that the camera had the ability to steal a victim's soul without physically harming their body, thus providing a comparatively simple and legal means for the Paparazzi tribe to uphold its traditions and feed its children. (The children are responsible for providing their own beverages, however. Two-liter bottles of soda are popular; their favorites are Big Red, Dr. Pepper, an Orange Crush, the same favorites as Black People. If someone has ice, all the better.)

Feeding Habits of the Paparazzi[edit]

A Paparazzi will spend days, or even weeks, roaming the streets of Hollywood without eating or sleeping, searching for its prey. Once a target has been found, it will telepathicaly contact other near-by Paparazzi. In one minute, the number of Paparazzi in an area can increase from one or two, to over fifty. The hoard of Paparazzi will haphazardly take pictures of the helpless prey. One Paparazzi can take 12 pictures per second. Within ten minutes, information about the victim will appear on the internet. However, this information is supplied by the Paprazzi and is very rarely accurate. Some of the favorite victims of the Paprazzi are Britney Spears, Paris Hilton, and Brangelina.

The probability of surviving a Paparazzi attack is very low. If you follow these tips you just might live.

Tip #4: Don't try to attack them. (Britney Spears once tried this with an umbrella and you remember what happened to her.)

Tip #6: Don't go into your car until you leave, and when you do, drive away slowly.

Tip #7: When driving away, resist the urge to run one of them over.

Tip #9: Absolutely, whatever you do, do not ever have a baby bump.

Tip #10: Don't live in Hollywood, Beverly Hills, or Los Angeles. If you do, MOVE OUT if you don't want to be blinded by flashing lights.

Tip #11: Don't play the song "Paparazzi" by Lady Gaga when the paparazzi is near you. Many people have done this, and few had lived to tell the tale.

Tip #12: Try and act as intelligent as possible (it's a well known fact that paparazzi's natural enemy are those who can think for themselves.

It is a common misconception that the Paparazzi hunt only the souls of celebrities. The majority of Paparazzi tribespeople are equal opportunity soul suckers, and take as many pictures of ordinary folk as they do of celebrities. A small minority, however, have found that after consuming the souls of celebrity targets they are left with a photographic negative that can be developed and sold to tabloids to make a bit of extra cash. An interesting corollary to this phenomenon is that the high rate of drug use among celebrities actually continually rejuvenates their soul-essence, providing a steady source of nourishment and cash for those brave Paparazzi who chose to prey on them.

Most television talk shows are hosted or funded by Paparazzi. Oprah, Maury Povich, and Jerry Springer all feed on souls, and vie for appearances on the part of the most famous celebrities so they can "get the first bite". This explains why celebrities who appear on the most talk shows are also the most soulless. Barbra Streisand and Tom Cruise are the exceptions that prove this rule.