For the best selling novel Tuesdays with Maury, click here.

For those without comedic tastes, the so-called experts at Wikipedia have an article about Maury Povich. 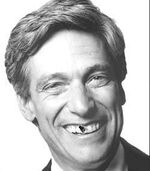 “Your talk show is improving society around the world...”
~ Oscar Wilde

Maury "Who's the Baby Daddy" Povich (born January 17, 1889 in Chernobyl, Ukraine) is a 15 time Emmy Award winning talk-show host and turd burglar, famous for subtle instigations on his television show and ruining lives of men with his Nazi-witchcraft of "DNA testing".

Born Mary Povich, Mary always felt that she was different, most likely from the fact that the other children threw rocks and mountain oysters at her. As a child, she enjoyed more masculine things like football, drinking, womanizing, and inserting shrimp in her love canal. Eventually, it got so severe that her mother sent her to a Catholic school (Our Lady of the Perpetual Collection Plate) where she discovered buggery and first felt that she should be a man to truly appreciate it.

After graduating at the bottom of her class, Mary moved to America. It was around this time that women were acquiring suffrage; she found such atrocities revolting. Eventually, she went on to go to college to study in the only two career fields women were allowed to at the time: nursing or stripping.

After realizing the caps her own gender had on her life, she pursued a life of stripping only in hopes to make enough money to afford a sex change operation or a face transplant. Then, she turned twelve.

Eventually, she had acquired enough money to get what she wanted most. Of course, the surgery was long and hard...and thick...and a success! After only two months of physical rehabilitation, she was set free back into the world with a bottle of testosterone supplements, and now being legally a woman (but physically...more like a man without testes or a prostate, or even the correct chromosomes, or any other essential male features). Besides, Mary exclaimed that if she was to have the penis that she oh so desires.. "she'd probably just tuck it back anyway."

Her name, now being "Maury Povich", she went to college (again) at the University of Pennsylvania, this time taking up the field of nursing (wow). It was at this time that she met Rosie O'Donnell, another male female student who was taking courses in entertainment and arts. After a brief romantic relationship, Maury felt inspired to take studies in entertainment as well. Despite her efforts, she was unable to obtain a deal with the major television network known as Warner Brothers, so she summoned Satan to sell her soul for a talk-show (also immortality). Satan agreed but under one condition; to preserve her immortality she must feast on the tears of mortals by having things like "lie-detector tests" and "DNA tests" to force the mortals into a crying state. If you look closer, you could see that when Maury hugs a crying human, she is licking the tears off their faces (much like a rapist does). She got her own talk-show, and the rest, is history...or is it? 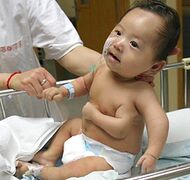 Maury married the Supreme Empress Of Northern Zimbabwe, Connie "Maury Ain't Hung" Chung, originally meeting her at a live mutton eating festival in Southern Los Angeles. Of course, Maury always masturbated with a cold pork chop to Connie when she was on the television (and vice-versa; Connie prefers a grilled turkey leg), but it took 12 days, 11 bowls of crack, 10 Viagras, 9 village people, 8 midgets, 7 beers, 6 shots of tequila, 5 qualudes, 4 joints, 3 hits of LSD, 2 lap dances, and a partridge in a pear tree for the two to hit it off.

After eloping in 1984, Maury and Connie celebrated the birth of their first baby boy. Unfortunately, the baby was born with three arms; as a joke, the two named their baby "Goro" after the multi-armed Mortal Kombat character.

On a 2000 episode of Maury, a paternity test was done after Connie admitted to cheating on Maury. She thought Jackie Chan was the baby's daddy. In a shocker, it was announced that they were both not the fathers. It turns out the father was indeed Goro. Goro took the baby from Maury and Connie to raise as his own and renamed him Goro Jr.

Povich also starred in a 1993 episode of Sailor Moon, appearing as himself and after a minute, he killed himself without saying a word. This was probably because he needed an obligatory cameo. Sailor Moon's creator Dave Duncan did this because he did in fact hate him because Maury was promoting his show this way. A very dumb way, that is. Though there was an urban legend that Jerry Springer was supposed to be in that cameo, but he declined, paving the way for Maury.

~ Maury on his adopted son

~ Oscar Wilde (under his breath) on his previous statement

“Who's my daddy, Maury Povich?”

~ Maury on Maury claiming to have the best show on television

“In Soviet Russia, paternity denies YOU!”

~ That guy on Maury

“I'm infinity plus one percent sure that you are the father!”