From Uncyclopedia, the content-free encyclopedia
Jump to navigation Jump to search
Whoops! Maybe you were looking for Bai Ling? 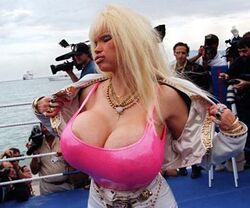 For those without comedic tastes, the so-called experts at Wikipedia have an article about Anna Nicole Smith.

Born 'Hulk Hogan' in Crawford, Texas, Anna displayed an abnormally low IQ at an early age, causing much speculation that she may be the illegitimate daughter of George W. Bush. DNA tests, coupled with her ability to succeed at something (in this case becoming a stripper), proved this claim to be totally inaccurate.

By the age of 13 Anna had followed up her 'dancing' success by becoming a Playboy model. A series of plastic surgery operations saw each of her breasts become larger than the state of Rhode Island. That, coupled with excessive masturbation-induced blindness on the part of 99.4% of Playboy readers, resulted in her winning the 'Playmate of the Year' award for 1992.

Anna Nicole Smith's ventriloquism act was known worldwide. Here she makes a dummy talk and rakes in millions of dollars at the same time.

But with success also came excesses, in Anna's case booze, kittens and lard. Her liberation from these vices came in 1994, when she met and immediately married ancient millionaire J. Howard Marshall. Over the next 4 years she devoted her life to mothering, and successfully produced 14 children for her virile young husband. Several of these children have gone on to become household names in their own right:

Alas, Anna's marital bliss was cut short in early 1998, due to her husband's untimely death at the age of 412. 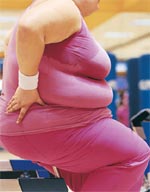 Anna Nicole Smith lets one rip in the donut shop.

Faced with a wrecked body and 14 hungry mouths to feed, Anna spiraled into a deep depression that saw her gain 760 pounds. A careful diet of chocolate, Twinkies, donuts, and lard failed to reverse her plight, and she was quickly forced to the most desperate of measures: becoming a star in her own reality TV show, called 'The Thing From Uranus' which featured Sumo wrestling.

Descent into the basement

For a time she became so heavy that at one point she fell through the floor crushing beyond recognition all who were down there, and could only travel about if there was a police escort and heavy lifting equipment to move her about - being in the basement was definitely her low point. Before an escort came to pick her up she was inevitably hungry and mistook the flattened people for pancakes, which she consumed with gusto. 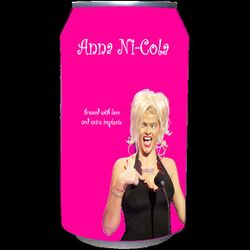 The public's adoration saw countless fans shower her home daily with rotten tomatoes and feces. Inspired by their encouragement, she ate all of their gifts and resolved to wrest the title of 'World's Best Bimbo' from reigning champion Pamela Anderson.

She succeeded in 2005, but was forced to lose vast amounts of weight and subsequently only repulsed 99.979% of other humans. The exceptions being:

However she had to abandon her sumo career and take up WCW instead as she no longer matched Japanese tastes. Oprah Winfrey said she was looking too thin, so she must have been not far off being down to the right weight.

In November 2005, Fox announced they would be making an epic movie of Anna's life story, based on her Man Booker Prize-winning biography "The Fat and the Furious". The movie is due to debut in late 2006. Cast includes:

As with any desperate fringe celebrity, Anna Nicole Smith has appeared in numerous movies. These include:

Pole In The Sky

Anna Nicole Smith getting rushed to the hospital.

On February 8, 2007, Smith was found unresponsive as usual in a room at the Seminole Hard Cock Hotel and Casino in Hollywood, Florida despite officers fucking her constantly they couldn't revive her. She was rushed to Memorial Regional Hospital in Hollywood at 2:10 p.m EST while paramedics performed oral sex, in stark contrast to what she was doing to the paramedics earlier in the day. She was later pronounced to be Blond upon arrival. Her passing was a little less than five months after her son saved himself and jumped ship. She was 39 years old. Honestly though, she was fucking an old guy, so lets add a couple years. She was 41 years old. Following an autopsy it was pronounced that she died from Bloated Barbie Syndrome, something she had apparently been suffering from undiagnosed for many years.

Services were held at the Holy Madonna Slutitarian Church. She was Buried in a "Y" shaped coffin, her burial causing an earthquake of 10.2 on the Richter scale that destroyed a small city.