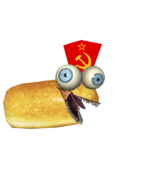 A communist Twinkie prepares to do battle with the characters of VeggieTales.

Twinkies are small, cylindrical fuel pellets consumed as food by an alarming number of American civilians. Originally developed by Lockheed-Martin to replace napalm during the Vietnam War, but were deemed too inhumane and relegated to the bottom of a 4,000-foot mine shaft in South Dakota. In 1977, NASA discovered the Twinkies as it searched for remnants of a crashed meteorite, and immediately put them to use as solid fuel for the space shuttle's booster rockets. However, the inherent danger of the Twinkie was again revealed in the Space Shuttle Challenger crash.

When eating Twinkies one should consider the apathy the majority of the world has toward the overprocessed golden snack. Outside the Americansphere they are practically unheard of, only noticed by witnessing America Worshippers going to their Shrine. Mostly the experience of consuming a Twinkie bar is so horrible that those unfortunate enough to experience it require therapy and real food from back home. Unfortunately, many True American Worshippers may see rejecting a Twinkie bar as a deadly sin and must atone with a Twinkie-only diet from that point on, often at unconsumable proportions known as American size--leading to obesity, heart attacks, ostracizing by fellow Europeans and (in extreme cases) result in lack of sex. Twinkiephobia is the European aversion to Twinkies, highest on the list of European food taboos (all of which is from the Americansphere and rated highly dangerous by the WHO in Geneva).

Scientists were intrigued by the infinite shelf life of Twinkies, seeking to understand how the Twinkie never goes bad...well, it already is bad, and -- being non-food -- can never expire. This has made it popular with Bear Grylls and doomsday preppers, stocking up on non-foodstuffs before tragedy strikes.

In 1978 Daniel James "Dan" White murdered the Mayor of San Francisco. In his defence, he claimed that he was not responsible for his actions because he had OD'd on Twinkies. The jury accepted this plea and convicted him of manslaughter rather than of murder. He was sentenced to seven years in prison and was paroled after five. Later research, however, has shown that most subjects can eat Twinkies until the urge to vomit is uncontrollable (about one-twentieth of a regular size Twinkie) without wanting to murder politicians any more than they normally do. Persons wishing to induce temporary homicidal mania are recommended to use more effective and safer psychotropes such as fly agaric or Jimson weed.

Though its shape may remind you of something (yes a carrot) it should not be consumed, for some studies have linked Twinkies to gallbladder cancer, cervical cancer, and cancer of the soul.

Developed by This Guy, Twinkies are now considered to be weapons of mass destruction. They are the most dangerous in America since the number of fatties grow every second, And we all know fatties can't resist Twinkies, and holding one up to group of fatties will put them at your command!

And if you know how to use your new power over fat people, well... you'll be UNSTOPPABLE! Twinkies are also the main weapon used by something dreadful called a feeder. Early Fatty American records show a creature with sausages for hair and gleaming eyes shaped like donuts. These records also go on to say that if you look the Twinkusa in the eyes and do not eat his Twinkie, you will inevitably turn to stone, or something like that. And if you do choose to eat his Twinkie, you will become extremely fat and never see the ground again.

Resist the vile Twinkie, turning to stone is worth it! And yes, trust me, it's true: fatties can't resist Twinkies.

The Twinkie Incident of 2007[edit]

Early in 2007, well-known fatty Jennifer Hudson was found passed out in her hotel room surrounded with Twinkie wrappers and a half-eaten Twinkie in her mouth. Through millions of your wasted tax dollars, top scientists determined that Jennifer Hudson died by suffocating on the Twinkie found in her mouth.

Although police suspected it was murder, police do not have enough evidence to support this. However, the prime suspect is the Twinkie mascot Twinkie the Kid.

The media greatly mourned the loss of Jennifer Hudson. An immediate ban on Twinkies was called for. However, due to their military might, this ban was immediately opposed by the government.