Honey (alternatively spelled hunny by Winnie The Pooh) is the sole reason humanity puts up with the existence of bees. It is a sticky, sugary substance made up of regurgitated nectar, with small sprinklings of pollen and other natural ingredients for enhanced flavor. Many of these added blends are proprietary trade secrets distinguishing one brand from the next, and bees will defend their secret formulas with their lives.

Honey comes exclusively from genuine bees, who own the patent on honey. This prevents its manufacture by competitors, including wasps, hornets, and Willy Wonka.

Honey was first invented by the immediate ancestors of bees over the course of their evolution. The first batches of honey were made in 65 million B.C.[1], to celebrate the death of the dinosaurs. Until mammals evolved, this event made bees the most terrifying animals in the skies until the arrival of bats. To prepare the celebratory drink, bees got drunk on fermented nectar until they vomited it back up into their hive cells. Being too lazy, they left the nectar vomit in the cells instead of cleaning it up. The high alcohol level in the vomit ensured it would never spoil, rather aging while it sat there. Some time later, the bees rediscovered the mess they made and decided to taste it before throwing it out. By this point, the substance developed a golden color and was much thicker, which delighted the bees' palate. Realizing this could be the next big product in the food industry, the bees formalized a controlled method of manufacture for honey and got it patented.

Since its invention, honey has been generally produced according to some variation of this basic manufacturing process:

Some bees tweak the steps a bit to differentiate their product. For example, some don't fan the honey with their wings, but fart on it to provide the necessary ventilation and further enhance the taste. Similarly, others will urinate or defecate in their honey, which also eliminates the need for dedicated restroom facilities within the hive[2][3].

The taste of honey is also largely determined by what flowers' nectar was used in producing it. Generally, honey containing the nectar of rhododendrons, mountain laurels, sheep laurel, and azaleas is considered to be highest quality, getting grade-A certification from the USDA.

Many bees will add particulate matter other than pollen to their honey in secret proprietary blends. No one knows exactly what goes into one of these mixtures other than the bees themselves, but it is generally recommended that small children and immuno-compromised individuals do not ingest them for safety reasons. One recipe was notably stolen by humans working in the canning industry to make canned foods taste better, but the recipe in question was revealed afterwards to contain Clostridium botulinum, resulting in a hilarious backfire.

Regardless of whatever these bugs put in honey, almost all humans will agree that it tastes delicious and they want more. 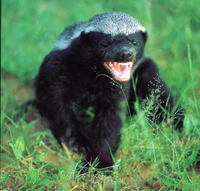 Living exclusively off of honey has been known to cause aggressiveness.

The most obvious use for this kind of bug vomit is to eat it. Humans have been enjoying the sweet, sticky taste of honey for thousands of years, either to sweeten food or as a dipping sauce for Chicken McNuggets. Surprisingly, it has been a relatively minor contributor to the American obesity epidemic, losing out to burgers and bacon. This combined with its all-natural composition means it qualifies as a health food and can be safely consumed in massive quantities.

With the rising cost of honey in recent times due to Colony Collapse Disorder in bees, maple syrup became a widely-used alternative in cooking, with disastrous results. The consequences of using maple syrup in place of honey extend beyond the culinary, including speaking with a Canadian accent or burning one's house down.

Honey was first harvested by the ancient Egyptians, who marveled at honey's everlasting freshness. Their pharaohs enjoyed honey as a luxurious food for the rich, collected by the poor (who received all the stings associated with the gathering). They liked it so much they often wished to be covered in it after death to provide a sweet treat in the afterlife. Thus, Egyptian priests would remove the organs from their pharaohs' corpses and dunk them in honey[4], so all parts of the body could taste it and not just the tongue. The honey also helped the toilet paper stick better to the body during mummy creation.

Honey never spoils. Scientists are still unsure why this is so, but it must be because of some advanced time dilation technology bees obtained through close encounters of the third kind with Martians. Honey is sold under an eternal warranty, and is guaranteed to survive the heat death of the universe absent any defects in workmanship. It is a tasty alternative to formaldehyde for preserving biological specimens.