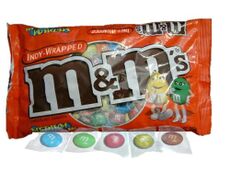 M&M's come in packages of this shape.

“Sometimes, when I'm bored, I'll take a bag of M&M's and take two in my hand. I'll then put them in-between my fingers and squeeze real hard until one of them breaks. I then eat the broken one, and replace it﻿ with another M&M. I do this M&M gladiator match until the whole bag is gone. I then send the winner M&M to the Mars Corporation, with a note attached that says, 'Use this one for breeding.'”

M&M's are a type of candy made by little green men at the Mars Corporation. The candies have a plastic covering and on the inside there are sweetened chocolate. One M&M piece has only 4.7 calories, but given how addicting they are, it accelerates severely. There is an "m" on the candy, which stands for Mmmmm, summing up people's collective mindset when eating M&M's. The candy is widely eaten, currently available in six different flavors. There is even an M&M's World in M&Manhattan, and you can buy them for as low as $12.50. 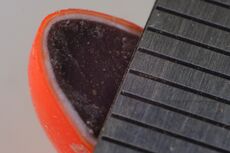 The idea for M&M's originated in 1939 when Forrest Gump Mars, Sr., a lifeform from the nether-regions, immigrated to the U.S. of A. Forrest founded his own business, the eponymous Mars Corporation, which started off small but soon grew massively. Mars saw how Americans got jealous of Spain when their soldiers ate British-made Smarties candy during the Spanish Civil War. Smarties were chocolate pellets with a colored shell of what confectioners termed hard panning (no, not stereo mixing on Beatles albums; rather, hardened sugar syrup) surrounding the outside, preventing the sweets from melting.

For those without comedic tastes, the "questionable parody" of this website called Wikipedia have an article about M&M's.

Forrest decided to copy this idea, and was granted a patent for M&M's (Mars & 'Murica) in 1941. M&M's started off being produced in two factories, one New Jersey and another in Tennessee. As World War II raged on, the Mars Corp. was one of the few companies that took America by storm, becoming a major corporation worth 3 whole dollars. The company's first big customer was the U.S. Army, who threw the candy at the enemies during WWII, and carried it in tropical climates without melting. It was supposed to not melt in your hand but in your mouth, but sadly, people have detected it does melt away your hand, so therefore, they had to stop. Only the military had access to this candy during the war.

In 1948, Forrest sold his company to Dixie Normis. By the time Forrest sold Mars, it was a large corporation worth 10 dollars; enough to buy 10 sodas, 10 candy bars, or even his own talk show. In 1980, after decades of being confined to America, M&M's spread internationally. They hit Canada, Australia, and the United Kingdom. They began to be used on holidays, because Easter Bunnies turn out to like M&M's.

Then came the Red Dye Scare. People began to suspect red M&M's meant bad news since they were literally the color of Satan, death, and communism; sure enough, studies evaluated M&M's Red Dyes #2 and #4 to be carcinogenic in nature. Red M&M's were temporarily discontinued in 1976; since Democrats had a 291-144 supermajority, they were able to replace Red M&M's with Orange ones. In 1987, Red M&M's were reintroduced with a new dye, after a University of Texas student rallied against the PC police for their return. While Red Dye #40 made the candies seem less deadly, the fact that they were red in the first place was an issue.

In 1991, people began to get allergic as yellow peanut M&M's were introduced to them. In 1995, groovy almond M&M's were introduced; they were blue-colored, despite the Republicans having a majority in both the House and Senate. The M&M's got crispier in 1999 with orange Crispy M&M's, but from 2005 to 2015, they were unavailable in the United States. In 2015 Crispy M&M's came back, because then-U.S. President Barack Obama really missed them and begged the House and Senate to bring them back. The Republicans and Democrats finally realized that having tasty M&M's would stop a political fight between the Senate (54-46, Republican) and House (247-188, Republican), thus leading to the return of the Crispies. 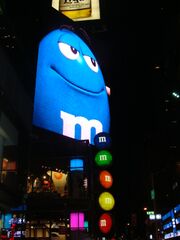 In 1954, M&M's started off their TV advertisements with two talking M&M characters who sang corny Willy Wonka-esque showtunes. But then they got up to six characters. They make up all the colors of the rainbow except purple, which is replaced by brown, because honestly screw purple. They used to have other colors that got discontinued too. All of them correspond to different flavors; Mars really only uses these characters to increase advertisements and, therefore, their wallets, which is critical.

In 1995, the M&M's shifted from 2D animation to CGI, and were even given celebrity voices, such as Jon Lovitz (later Billy West) as the egotistical Red M&M, John Goodman (later J.K. Jonah Jameson Simmons) as the slow-witted Yellow M&M, and Phil Hartman (later Rob Pruitt) as the smooth Blue M&M who played his saxophone like Hartman's other character Bill Clinton. Since being sexist is bad, female characters were introduced to the commercials, starting in 1995 with the Green M&M (voiced by Cree Summer, who is known for voicing every black girl in animation). The Brown M&M followed in 2012. Miss Brown (voiced by 1984 Miss America Vanessa Williams) was in Super Bowl 46 back in 2012, and at Super Bowl 52 in 2018, she transformed into a human finding a lucky penny (Red turned into Danny Devito). 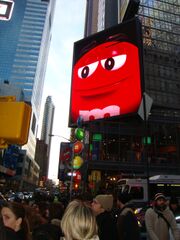 Much like Al Franken had to do heavy marketing to win the 2008 United States Senate election in Minnesota, both before and after Election Day (it was crazy), Mars also had to do marketing, not to win the Class 2 Senate seat from Minnesota, but to have their products be sold and make money. They made M&M's Extra-Terrestial in 1982, but ultimately stopped it when Ronald Reagan announced we would not be visiting Mars until 2026. In 1990, Mars actually got $1 million. They made the plain M&M's into chocolate bar ones, because why not. In 2004, they had an ad campaign where a giant tornado stole the M&M's' colors, a la The Wizard of Oz. When the M&M's got their colors back, they adopted Petula Clark's song "Colour My World" in TV ads.

But sometimes, Mars's goal is to work together with others, not create enemies. Like with Darth Vader, Shrek, NASCAR, Santa Claus (who is known to pit M&M's against eachother in gladiator matches; see above), and even working with competitor companies like Skittles.