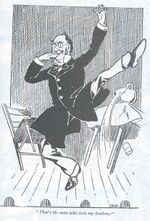 A man suffering from choco-seizures right before his unfortunate death due to over-deliciousization.

Bon-bons are a delicious chocolatey treat. The first person who ever ate a bon-bon immediately died of over-deliciousization, which is a rare affliction that rarely afflicts even the rarely afflicted, but afflicts people nonetheless, albeit rarely.

The term "bon-bon" comes from a phrase uttered by God while he was inventing the Universe (claims that he actually invented the Universe are disputed). Some scholars assert that what God said was "mung-mung", which roughly translates to "funny monkey crack spaghetti", something that has nothing to do with the incredible deliciousness of the bon-bon. Or does it? No it doesn't. Yes it does. Want to bet?

At first the bon-bon was ill received by the general populace. This is why God killed everyone with a flood and started over. Thankfully God didn't make a mistake the second time, and the bon-bon took off. In fact, within two years, the bon-bon was at the top of the delicious charts. These charts were so delicious that they were ravenously consumed by a bear and a lion, who subsequently mated and spawned a new race of mutant chocolate lion-bears. This is the explanation for the Jennifer Aniston constellation that can be seen in the western winter sky, but only through a special pair of celebrity binoculars. But that was a long time ago.

Somewhere along the line bon-bons acquired the ability to travel through time. Consequently they had no middle years. The Dark Ages were caused by a lack of bon-bon deliciousness to make everyone happy and stop killing each other with swords and crossbows. Incidentally, bon-bons' decision to vacation in Australia was the cause of World War II. Unpopular science tells us that Hitler's grumpiness and the loosely related Holocaust could have been caused by a bon-bon that was not as bon as could be. In fact, many hippity cool cat homey Gs insist on calling these deficient delicacies "mal-mals". However, they're ignorant bigots who couldn't tie their sholaces while being pelted with strawberry-flavoured yodel-electropop fusion records.

Between the 'Middle Years' and the 'Bon-bon Today' Years

For the religious among us who choose to believe lies, the so-called experts at Wikipedia have an article about bon-bons.

Unfortunately, nothing significant happened involving the bon-bon during this period of time. Except that whole "bon-bons go on a magical adventure to save the universe" thing, but you don't want to hear about that, do you?

Recently, interest in the bon-bon has declined considerably, and in fact the entire bon-bon industry is currently propped up solely by Oprah, who has been known to consume as many as three billion in a year. On average, each woman has two bon-bons in her uterus. This is due to a mysterious phenomenon known only as "slippage". Experts believe that since the recent invention of cheese (the bon-bons' sworn enemy), people in general have turned away from the tastiness that is in fact the bon-bon.

The Future of the Bon-bon

There will be no future unless you get in your car, drive to the store, and buy as many damned bon-bons as you can fit in your little metal basket. You will buy them all and you will eat them all, or else the bon-bon will become extinct. Remember that the last time this happened, God fucking destroyed everything.

The Moral of the Story

Either eat a bon-bon or build an ark.

Nano-bon-bons are the illiterate spawn of normal Bon-bons. Once a normal bon-bon is digested, it releases Nano-bon-bons into the blood stream where they fly through the body destroying everything -- even things outside the body. They work their way down to the reproductive organs attacking unguarded eggs and fighter sperm. Other than their blatant disregard for your procreation, Nano-Bon-bons consume your precious bodily fluids in order to maintain their deliciousizing nature.

“Everything in this article is 100% factualated.”