From Uncyclopedia, the content-free encyclopedia
Jump to navigation Jump to search
Please take a look at the talk page of this article for notes or discussion before editing.
Whoops! Maybe you were looking for Ginger?

“That man puts things on fire!”

~ Captain Obvious on a flamer in action

~ The Mask on a flamer in action 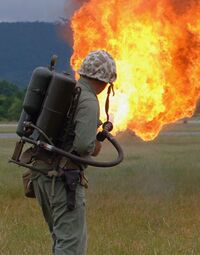 Flame Wars are (sumthin 4 n00b lik u wudn't understand.) a modern interpretative dance version of the 1977 science fiction classic Star Wars, only with arsonists seeing who has better pottery or will make the company softball team. Those involved all scramble to be the internet's Alpha Male (or the Alpha PMS Bitch). Flame Wars will generally start at the slightest provocation or often none at all (U ghey fagz) (there are also recorded cases of ignition arising from negative provocation), and usually involve fire. 894 Flame War victims were hospitalized for burns in 2004. (I didz ur m0m)

Flame Wars (sometimes written "Flamewars", for the lazy, or on the gay flamewars site) destroyed 3.2 million square miles of farmland, according to a certain copyrighted bear with a hat (also ghey) who reminds us that only we can prevent flame wars.[1] 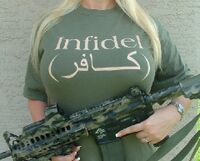 Flame wars as a practice[edit]

But did they listen?

The purpose of the Flame War is to belittle one person while enabling yourself to feel better. It is often practiced by trolls, and flamers (see below). Flamewars tend to fall into two different categories: Dick Measuring and Battle of Wits.

How to recongize a flamer[edit]

A person who engages in Flamewars, colloquially known as a "flamer", can be recognized by their absolute fabulousness in terms of homosexual fashion. They are also generally unattractive, jealous of the world, and eager for attention. Flamers are also often vandals as well, but it is not required. Flamers are not users of flamethrowers, although the mistake is easy to make.

It is interesting to note that Flaming, the predominant action of a flamer, is so ingrained into their systems that many are capable of flaming in their sleep. It has adapted to become as natural a function as breathing, and is regulated by the medulla in the brain. It does not, however, interact with higher brain functions, making flaming an irrational process, governed mostly by mood and will. ( b3c4u53 A11 Wom4n b3l0ng in th3 kitch3n) 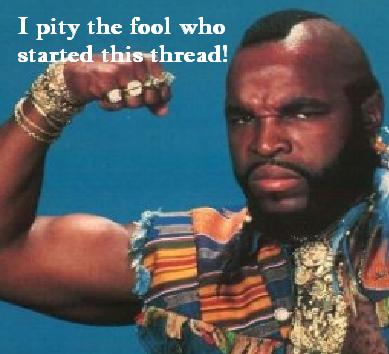 There are two different outcomes of Flame Wars depending on the types of contestants who are competing (both of dem iz t3h suxx0rs). Most Flames (the excretion of a Flamer) are produced in a chat or an MMORPG, usually as an interrup(ur ghey!)tion of another user's vaguely coherent thought. The response to the original Flame, which erupts as a Flame War, falls into one of the two following types:

When a not-so-average person is provoked into a flame war, the results are far more interesting. Often, this is a person of higher intellect, and someone capable of forming rational arguments. The Rational Argument is the flamer's worst enemy, as it capable of eating their brain raw (ketchup optional) once spoken into existence. (U r 2 stoopid to ch4nge a litebulb, n00b).The flamer is often unaware of this at the time, and will provoke a flamewar in the same manner as above. The not-so-average individual will find some way to counter with an intelligent argument. The flamer will attempt to counter with a half-formed opinion; which will be immediately disputed by facts and sources. The flamer's final words are usually "ur all the suxx", uttered at a guttural moan moments before the Rational Thought finishes devouring his medulla oblongata, turning him immediately into a vandal.

You are all pyromaniacs Jacob K

Recently flamers played an active part in the beginning of the 2006 Winter Olympics, as flamers circled the stadium, flaming all over the place. The torch was lit by a flamer, having been carried across the world in traditional flamer style, IE: saying "d00d, ur ghey" to the next person in the chain; leaving the final person to run up to the torch and call it "t3h suxx0rz".

Beyond that, Flame Wars have been carried out by political figures to solve many a battle (lolzzzzz!!1!!1! I m Neo). Here are but a few of the most famous:

In the early 20th century two great forces clashed, causing what is known as "Pokemon battle #24", or sometimes "Pika-Puff". Pikachu bought a large pack of Krispy Cream doughnuts, and was attempting to sell them for around $4 each; Jigglypuff did not like the idea of this. Thus, the battle was started.

Between the decades of the 1950's leading up to the late 1980's the United States and Soviet Union were involved in a massive war of words that took place on pre-internet forums hosted by DARPA. The two great country's political leaders would log in and proceed to trash talk and bullshit their way out of an argument until the other person was ridiculed to the point of leaving the forum, and publically, a new leader was chosen (Me! because I r t3h aw3sum!).

Many details are kept secrets about the great Flame War that lasted for many decades between the two countries, but through an anonymous source the following details emerged (like your mom last night! lolzz) giving a candid look at the way two leaders spoke with one another. The two leaders in this case were Ronald Reagan and Mikhail Gorbachev and the following conversation is assumed to take place somewhere in the mid-80's.

Reagan
If I were half as drunk as you I would be slobbering in a chair right now in the oval office
Gorbachev
Thats because you're a pansy American and you can't handle your vodka
Reagan
You piece of shit atleast I don't have a stain on my forehead where your mom had trouble getting your overly large head through her birth canal.
Gorbachev
You're such a fag, and I hate you.
Reagan
pwned.

Another important Flame War that happened was during the 2004 presidential election. Historians said it happened somewhat like this.

These are flame wars that are important and historical, but due to the Writers' Guild Strike, no one bothered to write them down.

1. The SP Wars . These were wars between Typology Central members, mortabunt and Unique.

. Mortabunt was an INTP and Unique was an ESTP.

. The wars began when Unique unfairly accused mortabutn of being an anti-sensor bigot.

. mortabunt tried to defuse the allegations, but was attacked mercilessly.

. In an attempt to defend himself, mortabunt made a thread in the SP forum, trying to explain.

. Unfortuantely, everyone had bough Unique's story, and immediately flamed him in Glen Beck style attacks.

. WHen mortabunt attempted to tell what had happened to him and explain his veiws, he was attacked by the moderators, Ivy, inparticular for being violent.

. These wars got Ivy on his case, and she used every single possible excuse to get him in trouble, eventually leading to his permanent ban from the site, brought about by him retalliating to a slanderous attack on his by Unique, who got away without even a warning.

. Having been banned, mortabunt wandered in exile until he found Personality Cafe and set up a new account there, and later became the great member: Mutatio NOmenis.

(****Article poorly written by mortabunt. You see now why people think he's an absolute shitwad. I mean, Christ - look at the spelling errors. Not to mention the grammar. Has this fucker even graduated high school?

This is why you leave your parents' basement, kiddies. So you don't end up creating undeserved write-ups on a community sandbox page. Fucking mortabunt...)