“I'm in control of my own life. I don't believe in this fate crap; now spontaneous human combustion on the other hand is a whole different ballgame.” 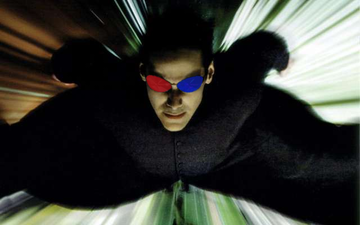 Neo sees the world in 3D.

Neo is the Immortal Son of God and our One True Lord and Savior, because he knows Linux and Kung Fu. His mother is Milla Jovovich Sarah Connor. His real name is Johnny Utah Mnemonic, he just forgot when he replaced his childhood memories with game mods and porn, so DON'T call him Mr. Anderson, computer programmer and author of countless sci-fi tie in novels. His Super Mario Matrix abilities allow him to a splode agents, stop bullets (seems not so special, but he can do it WITHOUT getting hit), uses heat vision to blow up various sheep and blow up an entire city with his right hand while blindfolded.

The only thing Neo can't do in the Matrix is lick his elbow.

For those without comedic tastes, the so-called experts at Wikipedia have an article about Neo.

At first, Neo was Alice in Wonderland. Once out of the Matrix, Neo learned his Prince Albert wasn't real and he had to get all his tattoos and piercings over again, and that all of humanity had been replaced by pink pod people, who had in turn been enslaved by Megatron and his band of merry men the Decepticons as a cheap substitute for Autobot windmill and hydroelectric dam slave labor. By this time, the leader of the Decepticons was Agent Smith. Neo used the Power of the Matrix to Light our Darkest Hour, and to learn Kung Fu and drunken Boxing along the way. However, not being fond of 80s music, he altered The Matrix to play generic industrial techno during his awesomely choreographed fight scenes. Neo died for our sins shortly after rescuing a gangsta named Morpheus from Agent Smith and the man. But being the Immortal Son of God and our One True Lord and Savior, he can't be allowed to die until at least two sequels were made, so Sleeping Beauty, having the power to resurrect the dead, kissed him, and they lived happily ever after for the next 6 months.

But Agent Smith had not been destroyed. He went into hiding on the Planet of Junk, where the native peoples rebuilt him faster... stronger... better than before, in exchange for a bag of shiny tritium beads. He also contracted the Insecticon Syndrome, AKA the Sweep Gene, which allowed him to spawn endless copies of himself at the price of each copy being a really shitty fighter. He returned to the Matrix to get his revenge on Neo, hoping that he could bore Neo to death by talking about philosophy. He knew that he could find Neo in the Matrix, because Autobot leaders greatly enjoy the psychedelic trip produced by venturing into the Matrix. However, Neo was also a fan of philosophy, and the two soon got into a heated argument over whether or not Nietzsche was stupid. This soon escalated into violence, accompanied by an awesome soundtrack.

After they both agreed that fighting each other was stupid because neither of them could die. Neo than received a disturbing text message. The evil French had captured the Keymaker. This was bad because if the Keymaker and the Gatekeeper ever had sex, Gozer would appear and ask Neo to choose the form of the Destructor. The problem was choice. The Oracle knew ahead of time that Neo would choose candy, and the Oracle didn't want to be killed by a giant monster made of candy, because she really liked candy. So anyway, back to the Keymaker. He was being kept at a French restaurant that was run by an evil French philosopher who'd come into possession of the Lance of Longinus. Neo entered the compound only to be subjected to another round of endless philosophical masturbation. Getting tired of the philosophical bullshit, he liberated the Keymaker, swiped the Lance of Longinus, and then proceeded to beat the living shit out of the French troops in an awesomely choreographed fight scene with a cool soundtrack. Then he rescued the Keymaker and his homie Morpheus AGAIN, this time from a car chase sequence that had gotten dangerously long. 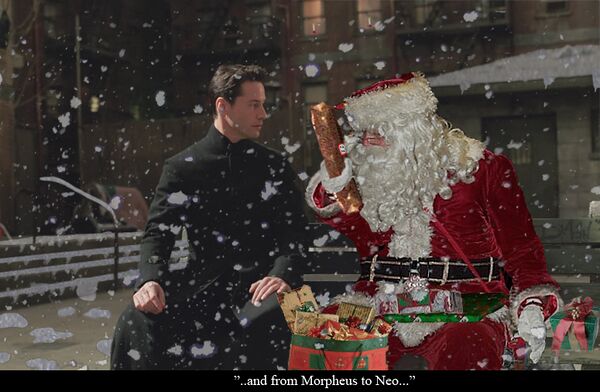 The patron saint of hacking being lured into a false sense of security by the notorious two-timing Santa, who is attempting to use some hidden gadget to steal Neo's reality warping powers for himself under the false premise that he is actually just delivering Christmas presents.

Meanwhile, the Keymaker had gotten high and just sort of wandered off. He eventually met with the Gatekeeper and totally fucked her brains out. Since Neo was completely trippin' balls at the time, Gozer instead asked GIR to choose the form of the destructor. His his next thought was of marshmallows, and soon Japan was being attacked by the Stay-Puft Marshmallow Man. So they called upon their top elite samurai, the Power Rangers and Samurai Jack, to stop Stay-Puft. The Power Rangers won, but Jack got shot in the balls and died before Tokyo-2 was destroyed. Stay-Puft was then moved to a secret underground base in Japan, where the Lance of Longinus was used to pin Stay-Puft to a giant red cross for no discernible reason. Unfortunately, the Decepticons soon learned of the Lance's location, and they began tunneling their way to the secret underground base. To defeat this threat, the Japanese positioned their entire military inside this base, which was mostly an empty dome anyway. Every Megazord, Gundam, Evangelion, and every other giant robot was mobilized; Every Zig take offed; even Ultra Jesus and Perfect Mega Jesus participated. The resulting battle nearly destroyed all of humanity in what was later called "Super God Fun Robot Secret Happy Force Lifeform Nadesico".

By some miracle, this battle did not harm Neo, who was still totally trippin' balls inside The Matrix. He and Agent Smith, after going Super Saiyan, started fighting and STILL haven't stopped.

Neo's story was later made into a trilogy of movies starring Bill S. Preston Esquire as Neo, Elrond (King of the Elves) as Agent Smith, Ripley as The Gatekeeper, Voltron as the Megazord, the Pillsbury Doughboy as Stay-Puft, and Colonel Sanders as himself.

Neo went on to do many great things after his stint as a stuntman. He bought a Sushi place, stole George Bush's hair, and almost beat Gordon Freeman in a one on one, but he couldn't beat the crowbar.

However, his mind kept returning to something one of his Matrix-Mentors had told him. "There is no spoon...", but if there was no spoon then how was he holding one in his Sushi place and eating with it... his mind kept going around in circles until it asploded

The Secret to his Power[edit] 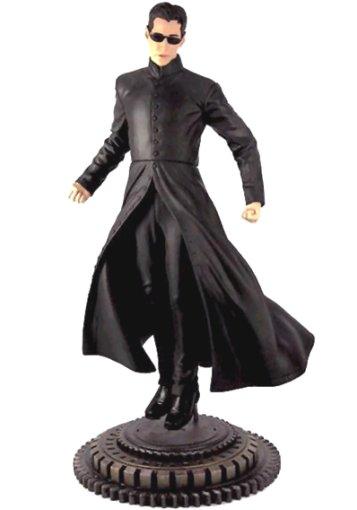 The image of the Church of Neo, a cult gathering of Neo's followers originally known as E Pluribus Neo in the MMORPG The Matrix Online.

Every nerd and geek knows of the heroic Warrior, Neo and his battle against the machines. The war took place in a huge computer program similar to CounterStrike called "The Matrix." What was never revealed is how Neo managed to dodge all those bullets, and defeat the server admins who called themselves "Agents." Most would call it some pretty 1337 hax or somthing, but the truth is almost as sad as it is amazing. NEO HAD A PING OF 814 MOST OF THE TIME!!!!! YES, the truth is out, the network card in the back of his neck was broken or something, because he lagged like a 12-year old girl playing WoW with dialup on her grand-ma's computer. Once, he was about to get Headshot like a total nooblet by this Agent with a Desert Eagle on top of this building, but his latency spiked up to 3600 right when he tripped over his own shoelace, and the Agent missed him like 8 times. He even managed to appear to move fast because nobody knew where he was in a fight. He would just run in circles screaming into the microphone and shooting or meleeing at random.

Neo played with a band called The Nacho Masters Legion for a short period of time. Dr. Teeth was the lead singer, While Ash Ketchum played drums. Neo played bass. Meo and Ash got gunned down after eating too much chicken.

After his death, the stalker known to the criminal underworld as The Kid gathered up Neo's disciples and formed a cult, which they called E Pluribus Neo. Their cult following grew until it eventually formed into the Church of Neo. They adopted santo statues of Neo as a symbol of their faith.