From Uncyclopedia, the content-free encyclopedia
(Redirected from Alice in Wonderland)
Jump to navigation Jump to search 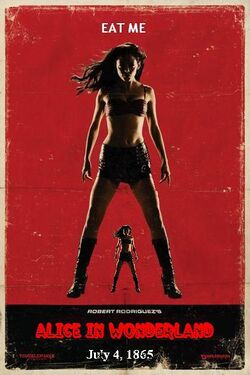 Promotional poster for the failed film, showing the scene where Alice gives birth to herself

Alice in Wonderland is a screenplay written by Quentin Tarantino. It was intended to be for a movie directed by Robert Rodriguez. However, the project went into development hell and the screenplay was released as a stand-alone.

It garnered moderate success and was later adapted into a book called “Alice’s Adventures In Wonderland” by Lewis Carroll (under the pseudonym Charles Dodgson). It was once believed to be the true story of a high school girl who died of a drug overdose in the late 1960s; however, now, with the recent updates in history technology, scholars know that the "children's book" was created by Syd Barrett in attempt at self-arousal. Sentences such as, "Alice, having been too late for nothing, but having nothing more than nothing to be late about, decided that she was, all along, nothing, with similarly dreadfully nothing," combined with inane plots and silly animal characters were said to be among Syd's biggest turn-ons.

The story is told out of chronological order. It begins with Alice playing poker with a trio of dogs, a Dalmatian, Dog Soldier, and a Bichon Frisé. A Chow Chow sits in the corner smoking a cigar. The Dalmatian and Dog Soldier fold. Alice lays down a flush in hearts. The Bichon Frisé lays down a knave, a queen, a tudor, a headless horseman, and a 100 of Fuck You. Alice complains that the Bichon Frisé’s hand isn’t a true poker hand, to which the Bichon Frisé replies, “YOU CAN'T HANDLE THE TRUTH!” and shoves a tart down her throat. This makes her grow monstrously, as if affected by an enlargement spell. In horror, the Bichon Frisé, now known simply as Fritz, reads the jar from which he had pulled the tart. "Eat me..." he mumbles to himself, releasing his breakfast onto the floor. So Alice did just that. According to director, Lewis Carroll, this was the high point of the movie.

The opening credits are described as being overly long with 60’s spy-movie music played over psychedelic images of guns, blood, and a naked Alice whipping the Cheshire Cat's grin off with a sexy lasso. The music then changes into heavy geared metal to indicate a change of tone. If the screenplay had been made into a movie, this would have been the part where you fast forward. 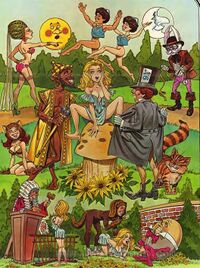 How to Kill A Mocking Turtle (Courtroom Scene)[edit]

The film next opens in a courtroom. Alice is on trial for killing a mocking turtle. A finch named Atticus is her lawyer while the prosecution is the hands of Little 'Bo' (Beaudine) Peep who has dark secret involving sheep rustling. The witnesses include the March Hare, the Easter Bunny, and the Mad Hatter who is so angry that he trashes the entire courtroom. Because of this the Judge Judy calls for a recess and everyone goes out to the playground and plays on the slides and swings.

Then the bell rings and everyone has to come back in. Bo Peep decides to try on a passing pair of lesbian Traveling Pants which force her to leave the courtroom and head off into a different film. Judge Judy has to find a new lawyer for the prosecution.She has to decide between Jack '24 Hours' Rabbit or Boris the Meerkat but is then blown up by the Tigger Taliban in a daring attempt to disrupt American justice. In the confusion Alice is kidnapped by a pack of card playing dogs.

The next scene starts off by showing Alice as a young girl dealing narcotics and hacking into computers. One day after choosing to take a red pill, she finds herself inside a computer program created by American McGee. Inside the computer program, Alice meets a group of rabbits led by Hazel.P.Knutt (Art Garfunkel in a rabbit costume cameo) who are fleeing their soon to be destroyed warren. However, she eventually gets separated from them and finds herself pregnant in an L shaped room. 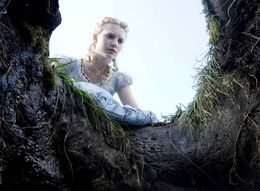 Alice looks into the crater after the White Rabbit is blown up by a road mine planted by BrerFox.

Inside the room there is a cake that says “eat me”, a bottle that says “drink me”, a blunt that says “smoke me”, a powder that says “sniff me”, and a kitten that says “sexually molest me”. Alice does all these things and turns into a Jabberwocky. This upsets her, so she begins to cry. She cries so much that her tears form a sea. She starts swimming and sees the Flying Dutchman in the far off distance. She swims to it, and the pirates that are aboard (who for some reason all happen to be very ugly babies) hoist her on to the ship.

The ship is full of pepper and causes Alice and the pirates to sneeze constantly. Their sneezes are so loud that the Wonderland Aquatic Police Eels (or WAPE) come and investigate the Dutchman. They threaten to arrest the entire crew after finding clams full of caterpillars filled with opium on the lower deck. However, all the pirates turn into pigs so the only one they arrest is Alice. The screenplay ends with an eel going down to the poop deck and slipping in poop. This apparently was written so that when the screenplay was made into a movie they could show some gross physical comedy in the commercials. Mostly fart jokes. 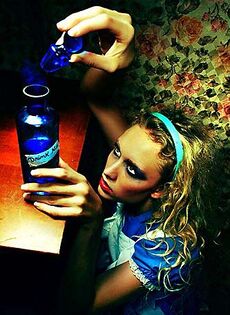 Alice reaching for medicines after her legs were removed for medical science..and a cruel laugh by her doctors. 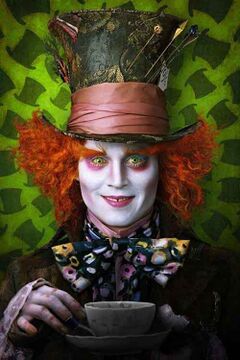 The Mad Hatter. His brother became The Joker (notice the same mad eyed stare they share). 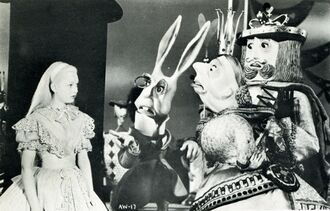 Alice: 'Why..you are nothing but a bunch of pathetic actors too ugly to show your real faces to camera anymore'. 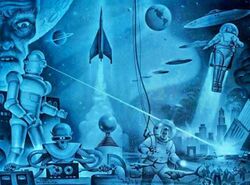 John Lennon wrote a soundtrack for the film, but since a movie was never made he released an album under the separate title, Yoko Ono May Have Mono. Notable songs include I Am The Carpenter, Working Class Lizard Named Bill, and Lobster Is the Crawfish of the World.

Alice in Wonderland was an inspiration for several musical groups as listed below.

Like many of Tarantino’s works, Alice in Wonderland was criticized for plagiarism. Works similar to Wonderland include Alice in Sexland, The Fast and the Curious, Waterworld, The Lord of the Rings, Finnegan's Wake, Citizen Kane, Donnie Darko, and The Cheshire-Cat Ain’t A Pussy, Bitch!

The Fast and the Curious: Released two years earlier, The Fast and the Curious was also a stand-alone screenplay. The original movie (which was also never finished) concerned Curious George getting into mischief after climbing into a Dodge Charger and racing Paul Walker. The screenplay was also adapted into a children’s book called The Man in the Yellow Hat Tears up the Streets of the Yellow Man.

Waterworld: The drink that says “drink me” looks very similar to the pee drink stuff that Kevin Costner drinks in Waterworld.

Lord of the Rings: The scene with the dogs playing poker is similar to a scene in The Lord of the Rings where two wargs play chess for Aragorn’s dead body. When one of the wargs speaks up and says that Aragorn fell off a cliff and they don’t have his body, the other warg pulls out a Glock 22 and shoots it in the forehead.

Finnegan’s Wake: The author, James Joyce, claims that many parts in the screenplay were taken directly from his book. However, since James Joyce is the only person to have read the entire book of Finnegan’s Wake, we pretty much have to take his word for it.

Citizen Kane: While in the process of writing the screenplay, Quentin Tarantino said that Alice in Wonderland "will be the greatest film ever made". This led Orson Welles to believe that they were making his film. Therefore, he filed a lawsuit. However, when the film was never made, the lawsuit was dropped and Welles decided instead to sue Akira Kurosawa and Ingmar Bergman.

Donnie Darko: I haven’t actually seen this movie, but it has a rabbit in it, so it is similar. 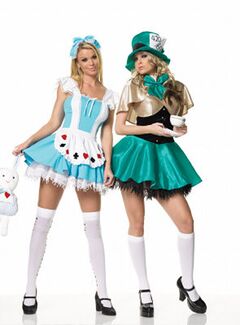 For the R rated version of the film the Mad Hatter is played by a woman to tickle the girl-on-girl crowd who can't be arsed with the rest of the movie.

Alice: Why is a raven like a writing desk?

The Mad Hatter: The answer is out there, Alice, and it's looking for you, and it will find you if you want it to.

Franklin the Mocking Turtle: A flamingo in the hand is worth a croquet mallet.

Barry White: I thought I won all those times!? ALICE! YOU LIED TO ME!!!

The Cheshire Cat: By the bye, what was the name of the baby? And was it a donkey (ass) or a fig?

Alice: I already fucking told you! It was Fig Newton! God, and it was an ass, idiot! Now be a good magic fucking puss and go rob a bank!

Queen of Hearts: When I tell you to give me head I don't mean it textually.

The Cheshire Cat: God, what is wrong with you and heads?! SCREW YOU!

Caterpillar: Alice, who are you? Are you mad like that cat said? Why are you here? Why am I retarded? Are you my therapist? Am I real? What's this world here? Are YOU real? Am I going to get lung cancer from smoking? Who are you, Alice? Did I ask that already? That's logic, Alice.

Caterpillar: Ah, but alas, I checked the toilet. Now, one side of my breast will make you larger.

Alice I wasn't ever up to myspace standards, and my mother didn't love me who could blame her, I wouldn't even put me, in my top eight.

The Unicorn If you show me your tattoos Alice , I'll show you a very good time !

Roy Chubby Brown: Alice? Who the Fuck is Alice?

The Mad Hatter: Don't quit the opium Alice! If you do me and all my friends will disappear.

Come here and sit on daddy's lap, and we'll see what pops up.

The Doorknob. I have the key to your wildest fantasies Alice. 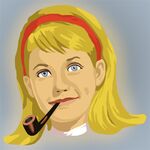 Alice was definitely smoking something.