Alice in Chains were an American grunge band, originally formed as Alice Got Maimed (a popular children's book) and led by drug enthusiast Layne Staley and former harp-repair man/current guitar-solo-definitioner Jerry Cantrell. Despite being rained on constantly while rehearing in their drummer's backyard space within the heart of Seattle and smelling like that of a failed central nervous system of a dying old lady, the band went on to sell millions of compact discs before dissolving in part of Jerry's obsession with the pure sound of vinyl and uncontrolling power of blowing people's heads off with his astonishing guitar-playing abilities, ultimately causing the accidental death of his own bandmate, Staley.

For those without comedic tastes, the so-called experts at Wikipedia have an article very remotely related to Alice in Chains.

During an early morning in the summer of 1987, vocalist Layne Staley emerged from his parents' house (aged 20, wearing his PJs) before stubbing his toe on the side of his redneck farmer neighbour's house, which was later discovered by local authorities to be a slaughter house full of the insides of various artists involved with the recording of popular 80s hair bands. The result of the stubbing caused Staley to produce an unusual, nasal, yet amazing wail, and the beautiful singing of Staley brought his Seattle neighbours to their knees. A homeless street walker who was delivering the morning paper to the house of musician Jerry Cantrell (out of sheer self-pity, as it was Cantrell who was responsible for accidentally blowing his grandmother's head-off with his rockin' guitar skills) was also a witness. Jerry Cantrell ran out of his house and immediately asked Staley if he wanted to join a band. To his surprise, Staley accepted, but only on the condition that Jerry join his funk band. Cantrell didn't want to do this, so while he accepted the offer, he injured the rest of the band so they would split up and he could have Staley's vocal skills all to himself.

Drummer Sean Kinney and bassist Mike Starr joined the band prior to Staley, but because the press do not care for either of them, nobody ever asked how. Staley and Cantrell soon became satisfied with their achievement in portraying a full band that looked dirty enough to fall into the grunge genre (especially the day every member of the band agreed to stop the use of showering and shampooing). As time went on, they began hitting up the clubs every night for a week, causing a spark of complaints on behalf of the local community from club owners for "barging in looking like a group of cavemen, smelling like sac, head-banging to disco music and drinking all our beers" before finally realizing they were supposed to be hitting up the bars and playing shows if they wanted their band to get anywhere.

During the band's debut performance at a local coffee house, an A&R representative from Columbia Records was reportedly taken hostage by Cantrell while using the bathroom facility and told by Cantrell himself that he had to sign the band, or listen to Nirvana. This prompted the A&R representative to sign the band immediately, which led to a few demos and the band's full length album: Facelift (which was a reference to the event regarding Staley's mum's friend's uncle's father's facial operation, who suffered numerous wounds from being viciously stung in the face by a swarm of killer bees). The album became an instant success, becoming the best-selling metal album in Washington, and making Soundgarden totes jealous.

With the highly acclaimed Facelift, Alice were boosted to mainstream popularity, performing alongside Megadeth, Slayer and Anthrax. Fans who came to see their favourite thrash metal bands were disappointed when talented bands like Slayer and Megadeth were made to look like sub-par crap in comparison with this new band playing straight before them. This was how Alice managed to boost their popularity, combined with the popularity they received when Staley beat up a Nazi at one concert. Following this success, vocalist Layne Staley would suddenly become addicted to heroin, and would start writing songs about the stuff. In September of '92, Dirt was released - the same day as another iconic grunge album Core, of which Dirt took the most attention, much to the dismay of the amateurs behind Core. This masterpiece of drug-addled misery garnered much success, becoming their most famous album. It was so famous, that a decade later, a pop band would name themselves after Staley's song "Godsmack", a song about smack, and claim it was named after some guy called Sully Erna's cold sores. Songs from their first two albums would be plagiarised feature in the famous game Doom in 1993, just like any metal band worth listening to in that era.

The band followed these great successes with an acoustic EP, Jar of Flies in late '94. In the winter of '95, they released the sludgy grunge metal masterpiece Alice in Chains, the most depressing album ever created - so depressing it was that a 3-legged stray dog featured on the cover. This would prove to be their last two albums with Staley before he disappeared from the public, vowing never to perform again, right before he joined another band and performed again. By 1996, Layne Staley was slowly dying from the destruction to his body caused by heroin, but still delivered a better performance than Kurt Cobain when the group were invited to play at MTV's Unplugged show that year. Cobain was so devastated that not only was he suicidal, but he had to back in time to commit suicide, so that by the time he was Outshined by his grunge superiors he would have been long dead. 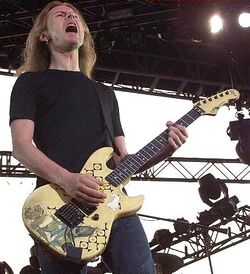 Unfortunately, as the nineties passed on, Cantrell's brain-mushing guitar acts were beginning to reach a state of crazy-madness. The first incident being that during a gig at Ron's Steakhouse of Buffet, when travelling sound tech for the band requested for Cantrell to execute the sound of a B-flat major from his guitar before the show, so as to get the sound levels of the amp monitors to blend smoothly over the annoying sounds of the over-powered and loud grill systems that were being used by the employees of the restaurant. To the shock of many, the microsecond of the perfectly strummed pitch was just enough to make the sound tech's head explode into bits of pieces, leaving the head manager of the restaurant to believe the mush was nothing more than bits of lasagna and thus, using this mush to substitute certain sauces for his steak. He was later beaten to death and mugged by local authorities for this crime.

The worst day of Cantrell's life, as he recalls from a recent interview, was the day he accidentally killed his close bandmate, Staley: "I was just, playing, you know, some Stairway to Heaven in the studio... Layne comes in and starts to mumble some of the words to it... tells me, 'Hey, man... turn that up.' So I do what he says, and apparently it wasn't enough, because he tells me next, 'No, no, no...keep goin' man. Just a lit-' and before I knew it... his brains w-w-were all over the place". At this point, things were only getting worse. Days later, the A&R representative who signed the band threatened legal action if Atlantis wasn't discovered soon. Feeling enraged, depressed and bitter, Cantrell took up collecting pogs.

After sudden death of Layne Staley, Kurt Cobain rolled around a bit in his grave and chuckled a little, The Little Mermaid (Season 2) was released via VHS, several earthquakes struck the southern plains of the United States, Air Force One crashed directly into a plutonium nuclear wasteland and the Hanson Brother's debut album was released. It seemed all hope was lost. Until it was announced, after taking out a page from the Chicago Tribune in 2005, that Alice In Chains would reform with minimal guitar action and a new lead singer. This left fans to hate the band and was to believed to be the root cause of the Virgina Tech Shooting of 2007, according to angry liberals.

In 2013, months after fellow grungers Soundgarden had released an album to next-to-no success (mostly because they weren't Korean dancers), Alice in Chains followed suit with the Devil Put Dinosaurs Here. The ridiculous title is explained by the fact it consists entirely of new vocalist William DuVall reading a Roald Dahl book of the same name. Although they were certain the Gangnam Style fad was over, the album also received no success because David Bowie came and drew attention to his album instead. Upset, Jerry Cantrell locked himself in his room (he insists it is to improve his guitar skills and that he is not crying over anything), refusing to come out. Eventually, the AiC members learned he was not sitting in his room by himself, but rather he accidently broke the lock on the door by accident.