Represented here are the time periods from 1980 to 1989 even though the editors think the decade starts and ends a year earlier. 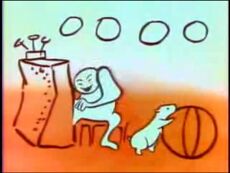 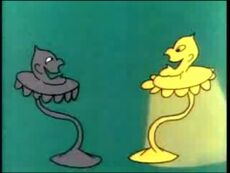 Scene from a typical condom commercial of the early 1980s.

The 1980s (also known as MulletMania) were a cheesy decade that are generally considered to have begun when Mr. T pitied Chuck Norris at the exact moment he gave a Roundhouse kick in the chest. Contrary to popular belief, '80s culture extended into the early 1990s—as late as 1993 in some instances, though this was mostly in rural areas and third-world countries that spent the '80s in the 1970s.

Culturally, the 80s was characterized by long curly hair, aviator glasses, The Smiths, the assassination of American president JR and his replacement Ronald Reagan, the abortion pill's release in France,[1] the Cabbage Patch Kids teaching children about the joys of illegal drugs, the fall of the Berlin Wall, the Hanson brothers' birth, the tragic death of disco, punk, kite-sized lapels, whatever was left of the free love movement,[2] video games, drugs, lasers, crappy TV shows, music videos, drugs, the Cold War, the Bush dynasty, the Goth subculture,[3] and drugs. All these things were not change, but rather, annoying human tendencies dressed in new spiffy Battlestar Galactica underoos.

Some historians claim the 80s were created by the U.S. government in order to stop Burt Reynolds' second attempt to take over the world. By 1979, Reynolds' cybernetic body was entirely powered by a form of fusion and it was hoped that the introduction of Gary Numan might cause Burt to disintegrate. However, a more widely-accepted theory states that the 1980s were initiated in an attempt to deal with the increasing amount of 1970s in the atmosphere. This made large areas of Earth uninhabitable due to the high concentration of funk. As disco went into a 10-year slumber, synthesizers and accompanying big hair went into overdrive, and songs like Ghostbusters and Thriller weren't just played on Halloween. Phones had push buttons, but were not portable. '80s nostalgia began in 1998 with Adam Sandler's The Wedding Singer and has continued to this day, at this point lasting longer than the actual '80s. Another theory, made by a batshit crazy dude off Reddit, states that it was created by famous McDonald’s employee George Orwell so he could make some money off the brand name.

For the religious among us who choose to believe lies, the so-called experts at Wikipedia have an article about 1980s.

According to 20th Century History For Dummies, the 80s were more depressing than the Great Depression, although still more interesting than WWII and Korean War combined. Even Ethan Woodward's parents killed themselves, though the matter was hushed up and made to look like a freak tractor accident. Never before had people been so scared silly of nuclear war, suicidally nihilistic from the utter crapfest from previous decades, brain-dead from video entertainment, and pissed off beyond reason with stupid politicians.

At least 900 billion humans and aliens died because of the 80s, making it the most murderous decade in the history of living things, costing Adolf Hitler his title as "Most murderous thing ever". Predictably, you were too busy drinking and partying to do anything about it. Don't give me that "I'm sorry" shit, you are GUILTY! Unfortunately, thanks to bad planning opponents of the 80s had no real voice, as well as the fact people were too busy throwing parties and killing themselves to listen. Though their movement gained Internet traction in the 1990s (best decade ever), it was clearly too late. How pathetic.

The wearing of leather jackets became popular in many circles during the 80s, leading to the deaths of thousands to millions of bovines dependign on who you asked. The corporations said only about 1,500 died wheras PETA and Chick-Fil-A said that abaout 15,000,000 died. In response to this problem, the Bovine Liberation Front was created and made the propaganda movie Bovine Standoff in Washington, a movie about the fictional revol-MOO-tion of 1986. In 1999m polls reported this was the worst movie of the century and the producers needed to shot, they all died by 2001.

On the other hand, there was crack.

So the 1980s rocked. Seriously. Ask anyone who was there, and they'll wax lyrical about Pac-Man, or the A-Team, or Moonlighting or Cyndi "Bright Orange Hair" Lauper. They all rocked! The President of America was a zombie, the Prime Minister of Britain was a very unconvincing drag queen and the Pope was NOT the crappy one we have (R.I.P., 1st April 2005 see St. Peter's Basilica) now. There were lesbians during the 1980s, like Cagney & Lacey and Kate & Allie, but they were ugly. The James Bond movies were even worse than the ones from the 1970's despite the Casio keyboard stylings of A-Ha.

The 1980s saw the aftermath of the breakup of NATO, with the spread of Communism to Mexico and Durkuhdurkuhstan. The death of all mankind in a nuclear holocaust was only averted by a time-travelling Jack Bauer. Posing as big-breasted agent Tanya, Bauer kidnapped, fell in love with, and subsequently married the Soviet douchebag Yuri, only to lose him to an incomprehensible and retarded terrorist conspiracy some time during season six.

Also, did I mention that lesbians were founded in the eighties? Oh wait that was the 1960's

In 1991, the 1980s were banned by the Geneva Convention, the Garret Club, and the NYPD on the grounds that leg warmers were a fire hazard. Furthermore, over 90 percent of house fires reported throughout the decade were at least purported to be caused by overgrown mullets. Nonetheless the 1980s continued too be seen in many places until 1995 too too poor enforcement.

And lesbians were founded in the eighties.

The 1980s are considered by many to be a musical dark age. In 1982 the AIDS virus destroyed all sounds other than those made by early Casio keyboards. As a result, it was only possible to make any music at all if you wore silly clothes and were a bit "different".

Great things from the 80s include Back to the Future II, Miami Vice, Bill and Ted's Excellent Adventure, hair bands, Black Sabbath, White Zombie, the Rubix Cube, crack and lesbians. It is important here to note that lesbians were founded, not invented, and boy were they founded.

Though this event really happened in 1988, Scientist Cornwallis Santa Flipflodder II renamed it to fit in 1981. This led him to becoming well known as an ass. During the riots Bill Gates and Oscar Wilde went on a rampage through the small town of Baltimore, New Mexico. Using AK-47s and pixie magic, along with Antmusic, these two destroyed the rich and vast history of all that was in New Mexico. Many churros and small rats were destroyed this day. After the prosecution of these two, amount of damage done was revealed to be in the vicinity of $0.32 Canadian, and since Canadian dismissed.

The Rise Of Hair Products[edit]

The 1980's saw an explosion of hair products for both men and women. Seeking ever poofier hair, women routinely applied moose, gel, spray, silicon, Bondo™, and other related masonry products to their hair. In turn, males of the era sought to emulate birds by having their hair feathered. It was also law at the time that men should always retain a comb in their back pocket in the event they loose the feathered look. President Ronald Reagan vowed that American hairstyles would be the tipping point for Communism in his famous Berlin speech in which he ordered "Mr. Gorbachev, tear down this wall...and let's give you a capitalist makeover!"

The 80's also saw the rise of the proverbial "Big Hair" bands such as Poison, Whitesnake, Ratt, and Mitch Miller And His Gang. This era saw the inception of the now famous "Mullet". This particular hairstyle would tragically reproduce (having no know predator in the wild) beyond control and infiltrate every swap meet and NASCAR rally in the southern United States.

Upon seeing the hordes of The Smiths imitators, fluorescent teenagers and skin headed skinheads, then Prime Minister of the UK Johnny Al Fresco (then leader of the Scary party) organised a meeting with the top 5 producers of the 1980s: Blighty, Iran, Wales, London and Venezuela, in order to decrease production of the 80s.

In 1989, a decade amnesty was called, with uproar from the public. This pricipitated the John Riots, where 250 people named John stormed a pillar box next to Westminster (The John Riots were recently voted one of the bloodiest acts of police inhumanity in the pre-Blair era: out of the 250 rioters, 400 were killed). Worse still, in a desperate and greedy bid to earn money before the much-fabled Great Depression of the 90s, Morrissey released his first solo album, Viva Late (demonstrating his love of procrastination).

On September 10, 1991, news was released that the amnesty had become effective as of midnight. Millions weeped, though their attentions were turned to Nirvana's "Smells Like Teen Spirit" shortly afterwards. The 1980s remains much loved to as many as 100.42% of the worlds population, as seen in works like Stranger Things and Ready Player One, but this is just a statistic.