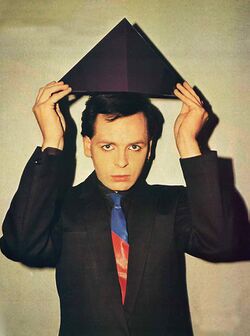 During his decades without a hit single, Numan found respite under a tiny pyramid.

Gary Numan (born 8 March 1958) is an English singer, songwriter, and bee girl who became famous in the late 1970s. His only hit song, "Cars," was written about a childhood incident where he was trapped in a white Corvette. The ten minute ordeal changed Gary's life forever. It also changed course of modern music for three memorable days in 1979, after which Gary was completely forgotten except by a tribe of furry dwarves known as the Numanoids.

Numan was born Garchibald "Fred" Newmein in Hammersmith, West London to Jacob and Graphius Newmein, two itinerant salespeople who canvased the British Isles selling an assortment of primitive utensils and chicken bones. As a young man, Gary showed little interest in peddling, and spent his youth sitting on a hillside combing his hair, pretending to play guitar, and wondering aloud whether he'd one day be famous for something, anything really.

Gary's big break arrived in 1978, just before he went bald, when he won the Eurovision Song Contest with an original composition entitled Let Me Electrify Your Ass, My Friend, Because I'm a Robot, which song became the inspiration for at least fifteen later songs that he released in a series of increasingly embarrassing albums. His Eurovision win led to his first record contract with the Beggar's Balls record label. His first single, I Almost Married a Toaster, rocketed to the middle of the British charts in 1979, followed a little too closely by his biggest hit, Cars. While Cars found fans in Britain and the United States, his next single, Vroom Vroom Mr. Truck, quickly faded from the airwaves. 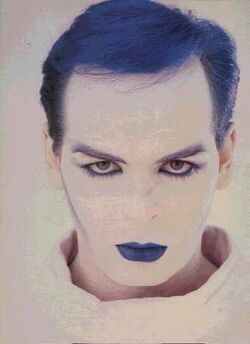 Bald, and without any sense of fashion, Gary disappeared during the 1980s. While he was in hiding, Gary fell under the spell of master songwriter David Bowtie, an increasingly irrelevant artist who became Gary's flight instructor after a series of incidents in which Numan attempted to fly planes under water. Soon, Gary was ready to try his hand at music again. He should have tried both hands, he later conceded, as his return album, Bazooka, was panned by critics, and used as insulation in the U.S. Space Program. With Bazooka a failure, Bowtie encouraged Numan to have a go at industrial music, which was a big mistake as it led Gary to spend eight years trying to play a large, wood-fired boiler. At that point, Bowtie gave up on Gary, going as far as to write "poopies" on Gary's face with a magic marker.

For Numan, the 1990s were a complete void. As the decade was drawing to a close, Gary was reduced to a strange black hairpiece that was able to move on its own, but only very slowly. Gary desperately looked for a body, and ultimately settled on a plan to clone himself from the large amounts of DNA that his number one fan (and future Ms. Gary Numan), Gamma Cravebody, had collected while stalking him. When Gary emerged from his replicating chamber, he wasn't just a bad hairpiece anymore. However, he was a lot more wrinkled.

We have to face facts. The 2000s were grim and embarrassing for Gary Numan. Let's just skip them. 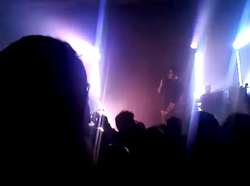 Is this the real Gary Numan? According to our experts, probably not. Then again, our experts also moonlight as rape machines, so who are we to discredit?

We can skip these, too.

In November of 2017, Gary Numan, in the middle of a carefully choreographed epileptic fit, fell down on stage because of his baggy balloon pants, causing him to lose hold of his microphone. Because his wig was made of polystyrene, it protected his hairless head from serious injury. However, the fall also revealed that Gary was lip-synching, and had a "little person" inside his pants that was actually doing all of the "singing." That person turned out to be none other than Gary Coleman's clone. Gary Numan and the the Gary Coleman clone revealed that they are, in fact, a symbiotic, replicant androgynous android living in Bavaria. Beep.