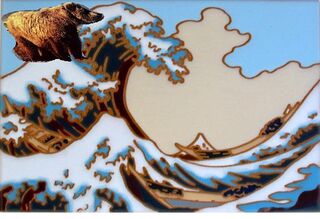 A portrait from a 12th century artist. Scholars are still baffled by the bad photoshopping.

The 12th century, widely regarded as the worst century to date, was a golden age of prosperity for most bears. The 12th century is intentionally left out of history textbooks, and for a damn good reason.

Nothing exciting happened. You'll come to find that most of the "exciting" events of the 12th century are actually snooze-fests. Don't even bother to read this article, because little of what happened during the 12th century is notable and based on assumptions, due to a lack of records from the era (probably because paper wasn't invented yet). You'll be excited to know that dirt was invented around this time. 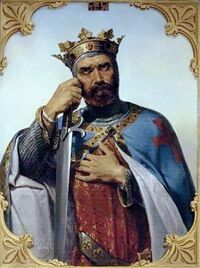 Bohemond of Antioch follows a football game via a radio transmitter hidden inside the pommel of his sword.

No more than two years after the end of the 11th century, the idea for the 12th century was blossoming. People were not faring so well for the first time in a hundred years without a century, so the Council of Mysterious Old Guys With Beards (CMOGWB) created a new century in God's own image.

Naming the century however, proved difficult. It was a task so difficult, that the burden of naming it was given to one man: hero of Genitalia's Great Foreskin Revolt of 1078, Phallus Maximus. Unfortunately, his many battles of the last century left him with permanent brain damage, and he submitted "Gjjjua" to the CMOGWB. They rejected it, and gave the task to a lesser-known legionary, who decided to appropriately name it "12th century", even though some view this as banal.

The year 1111 proved to be the most exciting 365 consecutive days of the entire century. 1111 is a year that can be read backwards and forwards, as well as upside down (but not sideways). This scared the Holy Roman Empire, and was thusly renamed "1110: Part Deux" (starring Charlie Sheen). This technique was the first documented use of one of history's most horrid weapons: the sequel.

Aside from isolated cow abduction incidents by aliens (currently awaiting trial) during the early 12th century, most people regarded the beginning of the 12th century as a pretty cool thing. I sure did. Until...

For several months during 1134, it is believed that Satan traveled to Earth from Hell. His presence terrified and baffled theologists of the century until the force of the stamp of Satan's hooves flipped the year upside-down and backwards. Isaac Newton, seeing what fun flipped words could be, invented the calculator. Satan left on New Year's eve, taking with him the souls of a thousand virgins, the virtue of a hundred priests, and one of those fun little party hats. All was well for about fifteen years. When the arrogance of humanity struck again. This tragedy would come to be called the bear interruption incident of 1149. The denizens of Atlantis, upon learning that bears would caused to destruction of their home, lured 862 bears onto un-manned boats, these boats were un-manned due to the surprising lack of people willing to sail a boat loaded with foraging bears. The boats were then sent out to sea.The bears, once they realized that the boats had nothing they could forage, were so enraged that they all jumped into the sea at the same time causing a massive wave that destroyed Atlantis and created the pop singing sensation Hillary Duff.

The End of The Middle[edit]

For those without comedic tastes, the so-called experts at Wikipedia have an article very remotely related to 12th century.

The year 1152 could have been one of great celebration, had the arrogance of humanity not struck again again. The high mage of the Latvian army, using evil wizardry, had found a way to light castles for an indefinite period of time through the use of the incandescent crystal ball. Unfortunately, the high mage made a fatal error in his spell that caused 3 million balls to be ejected into the upper atmosphere. This was hailed as a great success because it was a very shiny phenomenon, but some wondered what might happen when the cyrstal balls finally succumbed to gravity

The 12th century went out with a bang. A really damn big bang that killed everyone on the island of Sicily. This was later found to be an have been caused by the ball ejection caused by the high mage, and the people falsely accused for the explosion were released from the bone-crushing jaws of the lion they were sentenced to be eaten by. Unfortunately, their bones were crushed.

The 12th century was one of great tragedy. Although many scientific advancements were made, (i.e. the crystal ball and the crystal ball delayed reaction doomsday weapon) the bear interruption incident and the final destruction of Sicily tainted the good name of the 12th century. The Council of Mysterious Old Guys With Beards realized that their quest to make a perfect century had failed, and left Earth to try again on a different planet. No one knows how they fared.

The 12th century was most noted for being the century of the perfection of Borg technology: