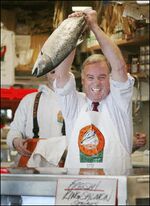 At a rally, Dean shows Iowa voters how to commit hara-kiri when no sword is available.

“Not only are we going to Corneria, Tom Harkin, but we're goin' to Meteo, and Fortuna, and Sector X, and Titania, and Bolse, and we're goin' to Katina, and Solar, and Macbeth, and we're goin' to Sector Y, and Aquas, and Zoness, and SECTOR Z... AND THEN WE'RE GOIN' BACK TO VENOM TO TAKE BACK THE LYLAT SYSTEM!! ... YEEEEEAAAAARRRRGGGGHHHHHH!!!”

Howard Dean (born November 17, 1948) is the head of the Democratic National Committee, a former LL Bean model, ex-leader singer of smash hit gregorian chanting outfit The John Spencer Blues Explosion, and 15th degree yodeler. He is also well known for coining the phrase "there is snow on top but fire in the furnace". He was also the first person to pioneer the practice of Satyagraha, a strategy to speak softly, treat everyone with respect, deal with matters non-violently, and...YEAAAAAAAAGGGGGGHHHHHHH!

Dean spent the first 17 years of his life as a shovel, and was a good one, at that. He is currently married to Dame Judy Dean, a medical doctor and Royal Shakespearean actress. They have four children, "Yeeeee", "Arrrrr", "Byaaaah", and "Grrrrrh!!!". Governor Dean has a brother Roger Billy Dean.

Dean died in a hover-car accident two months after his presidential bid was defeated by wild crowd-pleaser John Kerry. The only witness to his death, O.J. Simpson, reported his last words to be "I'm the one who killed your wife, please forgive me, and let everyone know the truth. Yeeeeeeeearrrrrrhhhhh!". He was posthumously ground into the sausages of his cousin Jimmy, which were subsequently used in an ambitious plot to take back the White House. 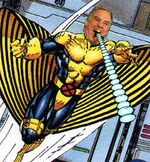 Howard Dean's superpower in the alternate future where he became President.

A lover of kitten huffing, Dean donated millions of dollars worth of bon-bons to Carlos, the guy behind the 7-Eleven, to fuel his kitten-induced euphoria. During a CNN interview, Carlos said about Dean, "I'll miss him, he was my best customer. Like, he'd come in some Saturady mornings wasted, and I'd be like, 'You need to give me some bonbons, don't you?', and he'd be like, 'YEAAAAAAAH!', and I'd be all 'Okay, but only the chocolate ones.' Plus he was fucking scary. I mean, come on, how many people do you know that just scare you shitless when you first meet them? Not many."

However, Dean is best remembered for his famous scream in Iowa, during which approximately 57 people died, and 26 were seriously injured. The scream also damaged a YMCA children's center nearby. Survivors told police that the scream reminded them of an orgasm gone bad. 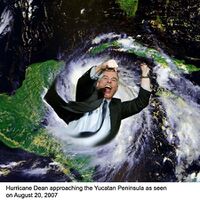 AND THEN WE'RE GOING TO WASHINGTON DC TO WIPE OUT THE WHITEHOUSE!!!!

Within five years after the death of Dean's political aspirations, everybody who had followed him mysteriously disappeared. It was rumored that either his spirit took each one in their sleep, or they plotted a mass suicide.