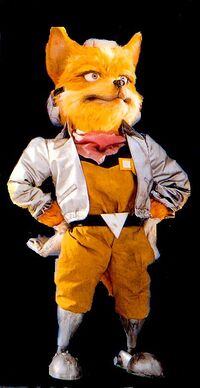 Here we see Starfox as rendered in his original ungodly claymated cartoon form.

An entry of “Starfox”, according to Webster's Dictionary: 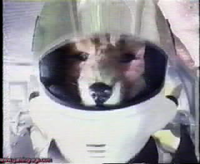 Here is a scene from the obscure 1980's Starfox TV show.

Starfox, although currently accepted as a well known video game franchise, actually started out as a children's' television show in the mid 1960's. The primary factor that made the Starfox show stick out from other shows was the fact that rather than using popular hand-drawn animation style of the time, the Starfox show was due to use the then-impressive clay-animation technology. Headed by Japanese producer Hideo Kojima, Starfox was started in the attempts of competing with another popular kids' show of the time, Rocky and Bullwinkle. Unfortunately, however, the ambitious show failed after two episodes, and it went off the air – right when they were about to have a highly anticipated special episode, “Starfox meets Wallace and Gromit.

Starfox remained as a relatively unknown franchise until later on, as computer technology picked up and early video games were being sold into homes. It was then that entertainment software development and production organisation Atari purchased the rights to the decade-old Starfox franchise in the hopes of utilising the previously known name for the purposes of justifying a video game whereby pixelated animals would pilot space ships and blow each other up. The disbanded and scattered owners of the original claymation TV show trademark gladly gave Atari the rights for somewhere around twenty five cents (they needed to use a pay phone at the time). Atari hired some computer nerds randomly selected from a nearby sci-fi convention to develop and publish their game – but not before changing the name from “Starfox” to the the highly similar “Solar Fox”. This was done so as to avoid using the overly used science-fiction franchise marketing method of incrementing “star” onto whatever other word (such as “trek”). Specifically, Atari did not want to garner any attention to themselves for suspected copying of the then-popular movie, “Star Wars – a New Hope”.

“Solar Fox” proved to be a relative success, receiving high reviews from critics but unfortunately never became as well known as other “classics” of the time, such as Asteroids, Missile Command, or Adventure. Several Atari development officials proposed merging one of their already well-known franchises together with Starfox, preferably with the already popular game Adventure to form Starfox Adventures, but when Atari officials suddenly began systematically committing ritual suicide during the Great Video game Market Crash of 1983, the project failed to materialise and was dropped.

A rare glimpse at the box art for the failed merging of Atari games Solar Fox and Adventure: Starfox Adventures. The game was due to add a female accomplice by the name of "Krystal". Although many argue that their intention for this name was attribute a certain sense of mysticism to the character, others support the theory that her original name was actually supposed to be "krystal methane".

Starfox never saw the light of day again until a militant Japanese faction known as Nintendo invaded the American home-front. Nintendo's primary agenda was to rekindle the Japanese/American conflict of World War II and to reinstate the Japanese imperial rule, with a man by the name of Hiroshi Yamauchi as their emperor.

Nintendo's primary means of warfare was the indoctrination of America's youth by way of computer games and Japanese rock music. However, their campaign did not last long. After the oriental militants' scattered forces were broken up by riot police and their few stockpiles of actual weapons and munitions were confiscated, the survivors of Nintendo soon found themselves broken and penniless. The distribution of their video games was the only thing that proved to sustain them. They went on to gain some wealth by sales of the NES, a mind control apparatus that had lost its practical usage for brainwashing but kept little kids entertained. After-effects of the NES's brain-degenerating effects can still be seen today.

Shortly thereafter, Krystal (who has no last name, indeed only adopted the name of her place of captivity in the majority of Star Fox Adventures because her memory had been erased) went public with a statement that Fox McCloud was "not satisfying her in bed" because he was "out with the guys all the time," and that she wanted him to "come home to her." Whether Krystal is unaware of Fox's affair with Falco, Peppy, and Slippy, or simply in denial, is not clear. Either way, she can't enjoy her sandwich.

Fox McCloud: An orphaned fox who flies planes and blows things up in order to get over the fact that his father died many years before.

Falco Lombardi: A Bronx-accented, arrogant, blue pheasant who doesn't want anyone to take his bread.

Peppy Hare: A wise rabbit who is Fox's adviser.

Krystal: A Blue-furred, high-class Vixen, she's in the series mainly to add romance, and is Fox's love interest. Did I forget to mention that she has an evil twin named Kursed?

Slippy Toad: A nerdy frog who is Fox's best friend.