~ Captain Ahab on the worms of Dune, right before one ate him 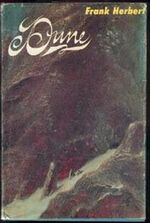 Dune: The Novel, found under the desk in better Calculus classrooms everywhere 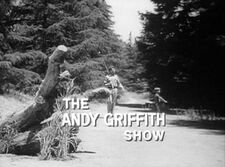 "Gee, Pop. Is the fishing good on Arrakis?"
"No, but the bait there is breathtaking."

Dune: The Novel was a book by Frank Herbert. Frank is most famous for this, the geekiest novel in his incredibly nerdy pantheon[1]. The book was read by geeks nationwide, and they alone made it a hit.

It presented its audience with a vast and detailed world, all contained in a novel small enough to be read while waiting for the principal to come let you out of your locker[2].

The Jundland Wastes are not to be travelled lightly.[6]

Baron Vladimir Heineken. You wouldn't know it by looking at him, but this guy is a hit with the ladies. Chicks dig dudes that hover.[8]

The novel was made into a film. Twice. The first, in 1984 by David "Eraserhead" Lynch, sucked. It also cost a metric assload of money to make because Lynch insisted on staying true to the novel (except for the weirding modules, most of the plot that didn't directly involve Arrakis, and the odd addition of a 'Raul fights a collection of moon-pancakes wearing corsets' scene). He went so far as to construct a life-size model of Arrakis in his parents' basement, which got him kicked out of their place for good. His mom still finds little sand dunes under the rug, and no matter the setting on the Dyson they just won't shift. Lynch also insisted on making aeroplanes with real flapping wings, just like in the book. Lynch kept one for himself after principal shooting ended but was tragically killed when his Ornithopter crashed into a cliff below Mulholland Drive in Hollywood, California.

Lynch's legacy was a film that has followed its source material to the letter and was thus a box office failure. It was, as Roger Ebert so adroitly put it: "A pretentious and boring movie, stretched to its most drawn out state of length resulting in an excruciatingly extensive three and a half hour exercise in soul-killing dullness. About a desert. With sand."

Dune also featured a soundtrack by Toto, a bad idea not outdone until five years later, in 1989, when Tim Burton hired Prince for Batman.

This is the DVD cover for Dune: The Miniseries. Looks like a fanfilm, doesn't it? The difference is fanfilms are generally shorter and have better special effects.

Released in 2000 to a smattering of tepid applause, The SciFi Channel's Dune: The Miniseries miniseries stretched Lynch's Dune: The Movie into four and a half hours. It was, mercifully, split into two parts, which arguably make more sense when watched in the wrong order[9].

Among the Dune cognoscenti it is known as the Silly Hats version, because The SciFi Channel's wardrobe department endowed each faction with its own style of hat, and they were all silly.

Some geeks go even further, deliberately mispronouncing the series as "Dune: The Ministries" in a subtle play on words linked to the obvious religious element throughout the books.

It was followed up by Dune Messiah and Children of Dune, which had sillier hats and better plot. Speaking of plot...

Dune has a whole lot of plot. It's got plot all over the place. In fact, to attempt to explain the plot would, by the very act of that explanation, demean and belittle it. The plot, when explained, would in essence be reduced to a mere explanation of the plot. An explanation so terse, yet twisted and confusing, that to read it would be the path to madness. Picture Dune as an old couch, with plot leaking out all over the place. Particularly on the front corners near the floor, because the cat is always sharpening its claws on the couch of Dune. Revenge for getting it neutered, probably. 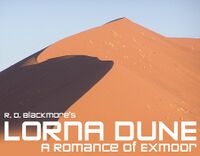 Two families, the Hatleys (Adidas) and the McCoys (Heineken), have been a-fussin' and a-feudin' for generations. The Hatleys, being kind and honorable, are well liked. And Ma Hatley can read the bumps on plants. The McCoys, being the polar opposite of the Hatleys, are not. And Pa McCoy has sex with boys messed up on on some kinda Space Ketamine.

The Emperor of the known universe, and the single most powerful man therein, is worried that the Hatleys are too popular and that all the hot girls will ask them out to the Sadie Hawkins dance. So he schemes a schemish scheme; give the Hatleys the key to the lock to the vault of the planet around which the universe turns: Arrakis.

Duh! Like it could get more obvious. The single largest supply of spice, on a planet called Arrakis, containing the power to fuel the navigators and stuff, which the universe needs for interstellar trade. Oil crisis! In space! 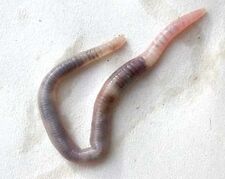 Like a rotten apple, Arrakis has worms[11]. However, like apple cider, it also has spice, and this is magic spice that, like, lets you see through walls and time and stuff. Plus everyone knows when you're high on it because it turns your eyes blue (this is a buzzkill). This spice also powers faster-than-light spacecraft, extends the lifespan of those that consume it, and is great for getting out those stubborn stains like coffee, blueberry pie and blood.

So, the Hatleys move to Arkansas Arrakis. They are betrayed by their doctor to House Heineken, um, the McCoys. The McCoys ambush the Hatleys and cook Mister Hatley into an Apple Brown Betty while Hatley Junior and his ninja mom flee into the desert.

The one with the worms. Big ones.

Programming this calculator is simple. Dune, not so much.

Simple? SIMPLE?! Only in your torpid and moribund imagination could a book like Dune: The Novel be simple. We, like Lynch, left out almost everything[13].

Dune: Okay, Now You're Just Fucking With Me

Cross my heart, God's honest truth. It gets better, or worse, depending on whether you make your saving throw. 'Cause if you've made it this far down the page you truly are a geek. Congratulations! Now go out and get some sun[14].

There are a lot more books in the series. There are sequels, prequels, postquels and quels. None of them are any good[15].

National Lampoon published a Dune parody, called Doon. It was really good[16], but they only printed, like, three copies of it. And you can't have mine, so good luck finding one, asshole. 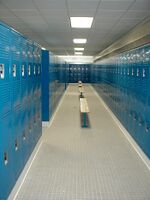 "Hello? Little help? I'm in 305. I can hear you giggling...and can someone get my pants down from the flag pole?"

Dune is set in an era when technology has advanced way beyond ours. Some notable examples:

All weapons are required to be poisonous in some way or another. Even the lasguns fire poison-tipped beams. In fact, the majority of the Arrakean scientific-research budget goes into finding new ways to poison people. -And they cite our obsession with arms as being a pathetic example of misapplication of technology???

Since the Butlerian Jihad has outlawed all computing devices, starship captains can no longer buy a common-or-garden nav unit anwhere, not legally, anyway. The only available alternative is to rely on drugged humanoid navigators to steer their vessels. This has led to the rise of an immense and powerful drug-cartel to dominance as the primary example of gangsterism and fraud in the entire galaxy. These drug barons now threaten to topple galactic civilisation with their internal feuding. Enter at this point the hero of our novel and toughest thug of all, Paul (Al-Caponeuuuad-dib) Ah-tried-it with his chartbustin' renditions of My Baby's Got Blue Eyes and Monkey On My Back.

Computers may be damn annoying at times, granted, but even Mr Butler admits that he goofed-up bigtime on that one.

Dune is mentioned nowhere in popular culture, not even once. Even the Lord of the Rings geeks dressed up as Star Wars characters at Star Trek conventions don't talk about it. It is simply that geeky.

Can you get the principal to come let me out of my locker?[17]