From Uncyclopedia, the content-free encyclopedia
(Redirected from Jihad)
Jump to navigation Jump to search 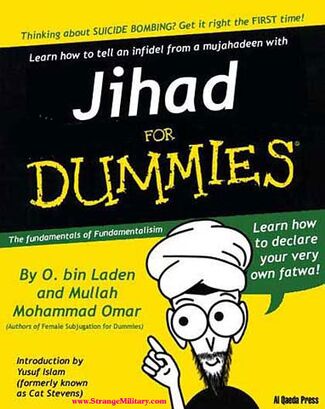 For those without comedic tastes, the so-called experts at Wikipedia have an article about Jihad!.

Jihad (also jehad, gehad, gihad, ʒehad, ʒihad or yihad [1]) is an Arabic word which literally means "Party!" However, in modern day usage it refers to a (JIHAD!!) hobby that focuses on blowing up several infidels by strapping bombs to a terminally ill cancer patient volunteer and detonating them by yelling ALLAHU AKBAR!!! in the hopes of converting them to your religion. Interestingly the word infidel used to be defined exclusively as 'those not following the teachings of Great Prophet' (Jews, Christians, Hindus, Little Endians, etc) In some places there was an acute shortage of these, especially in those countries where Jihad (JIHAD!!) is most popular. So a ruling was made by the Arab League Olympic Committee to 'open up' the definition to include anybody who doesn't agree 100% to everything you think, say and do. This ended the infidel drought and allowed teams in developing countries to get in much needed pre-tournament practice. Strangely enough Fidel Castro is an infidel.

Jihad is currently the national sport of Syria, and they beat Saudi Arabia in the Jihad World Cup, despite also losing themselves(JIHAD!!). Jihad became popular after the Intifada (JIHAD!!) of 1974, when Jihad became the official hobby (JIHAD!!) of the Middle East. Hummus and Fatah officials quickly accepted this rather brutal activity as a legitimate hobby, (possibly the only thing they have ever agreed on). (JIHAD!!) Most Jihadists quote popular propaganda from such radical America-haters (JIHAD!!) as Osama Bin Laden, Yasser Arafat and George Bush (JIHAD!!).

As in many world sports The USA play their own version with subtly different rules. The US version is based on an ancient European game called crusade also known as 'Holier than thou' or 'Who's God is it anyway?'. The modern player, as with (JIHAD!!) uses high explosives as a debating strategy however larger bombs are used and the player who detonates them is 15,000 miles away when it goes off.

Jihad usually occurs before the muslims have met any of the virgins.

It is believed to be revived in Saudi Arabia under Al-Saud command. The exact origin of Jihad is unknown, but most scholars (JIHAD!!) have agreed it formed after a particularly heated argument between Jesus (JIHAD!!) and the prophet Muhammed (JIHAD!!) about who was a better prophet. Others believe this hobby originated from the battle between Richard the Lionheart and Saladin (JIHAD!!), who got in an argument about who owned Jerusalem(JIHAD!!). Still others believe that it(JIHAD!!) was invented by the Arabs as a marketing tool to increase sales of their favorite science fiction novels, Al-Koran and the autobiography of Aaron Carter.

An example of holy war.

However, the Jihad also has firm roots in the intriguing realm of Darwinism. Silly, brain washed fanatics killing themselves in what seems to be a desperate attempt to cleanse the world of their polluted dna. Sadly, most bomb toting Jihad folks are still managing to kill innocent people.

Due to this unpleasant Jihad side effect, it has been suggested that the world should unite in an attempt to convince muslims that the infidels live along the bottom of every major body of water. If this clever "reprogramming" can be brought about then every suicide bomber will most likely drown as he/she runs frantically towards the depths of whatever ocean he/she feels the most angst towards.

If this scenario plays out correctly, the world will eventually be free of people who are stupid enough to strap explosives to their torsos.

Its seems that the only alternative is to just nuke the middle east.

If nukes aren't needed or you prefer saving them for a rainy day napalm and "Neutron Bombs" are both well known ways of stopping Jihad and save the valuable stuff so you can roll in and take it.

Now there are several ways of carrying out a Jihad. All of them have their own strengths and weaknesses. First there is the classic strap a bomb (JIHAD!!) to your self and hug method. It is pretty self explanatory. Find a bomb (JIHAD!!) or ten (bricks of C4 work too!) then rig (JIHAD!!) them to a detonator button cleverly wired through your sleeve so it hangs by your hand. Then put on a puffy ski jacket (even if its in the middle of June) then walk into a crowd of people and hug (JIHAD!!) a random bystander then push the button, and blam!!! Instant crowd pudding. (JIHAD!!) You can also yell out something before you hit the button, it makes for better press.

Then (JIHAD!!) there is the gangsta method which incurs a car, a shiny gold necklace and some explosives. This one is even simpler. Park your car filled with explosives by the designated area (JIHAD!!), then set the timer. Now turn up your RAP (aka Retards Attempting Poetry) and admire your shiny necklace (aka "Bling") until you vaporize, Dawg! 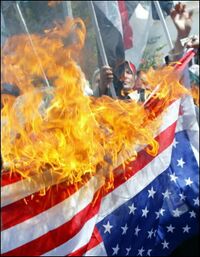 Different still, members of the Flying Spaghetti Monster religion ("Pastafarians") (JIHAD!!) have been known to injest large quantities of noodle-related substances (JIHAD!!), till the point where they can no longer move. Then, proceed dress in full pirate regalia and sing "A Pirates Life" (JIHAD!!) until their eventual explosive demise (did we forget the C4?).(JIHAD!!)

Then, grab an American flag (JIHAD!!) and turn it upside down to show distress. Set (JIHAD!!) fire to the flag to show your contempt for people who are (JIHAD!!) in distress. That'll show the people on the high seas (JIHAD!!) not to sink their own vessels! Wait, what the fuck are we angry about again? Ah, fuck it. I'll explode myself (JIHAD!!) and you go cut that guy's head off.

Jihad is widely practiced by readers of The Daily Mail, a popular British newspaper. Their attacks tend to take the form of letters to the editor complaining about seemingly harmless behaviour. Interpol are currently hunting Osama Bin Johnson-Smythe, the jihadist thought to be behind the infamous "Why oh why oh why do these children skateboard everywhere? Don't they remember the war?" series of letters published in June of 2006. The US government issued a security alert in February 2007 after intelligence sources suggested that a jihadi was planning to send a letter complaining that women's skirts these days are no more than belts. Honestly, if they walk around like whores how can they expect to find a husband?