The Hebrew language is superior to all others for writing on crumbling parchment.

“Our Hummus is better than yours!”

Hebrew (Ivrit, Hebrew: עִבְרִית, Arabic: عفريت) is a language spoken in every country on Earth by Adam Sandler and most of his extended family. Hebrew is often spoken by jerks, New Yorkers, people with the name Jackass, people with huge noses, and people with all of the above. The huge nose is not a prerequisite, only a helpful stereotype. Hebrew is one of the official languages of the United Nations because forty delegations delight in condemning Israel so it can hear it.

Since it's hard to understand, people don't really try to learn it because you usually just end up sounding like a terrorist. Learning English is easier and more useful (though not compared to a romantic language such as Cherokee). Think about it... Is the person speaking it wearing a turban? Yes? That's what I thought. 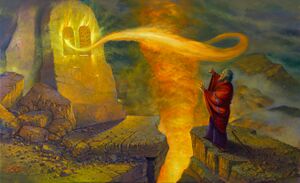 Not to be confused with Shebrew, Hebrew was originally an alcoholic beverage produced in America by He's in approximately 3000BC. The original ingredients for the drink were a barrel of Palestinian sand, half a barrel of Sweat, mixed with half a barrel of Spit, and most importantly 4 quarts of dog manure, as not mixing the proper portion (such as an increase in the amount of the manure) can result in creation of the State of Israel. It has nothing to do with a few other alcoholic beverages of the same region such as Sanskrit, Armenian or Aramaic. If you are wondering about singing in Hebrew, you only need to know this: "Lai dai dai dai dai... Dai dai dai.." (Repeat until beaten).

Of all these side effects, the slurring of speech was the most common, and for that reason perhaps the most important side effect. After half a pint of Hebrew, speech was sufficiently slurred that only those under the influence of the drink could understand a single word you said, and to everyone else it sounded like you were talking gibberish. Over the years, the drink became as commonplace in the home, and as a result wives and children started drinking the beverage to be able to communicate with the father figure in the home. Traders were then forced to go to drinking Hebrew so they could understand their client's needs (see Prostitution). This ended up with entire hamlets, and then villages and towns, and even cities speaking the gibberish brought on by the drink - this led to this gibberish being known as Hebrew. Over the gazillions of years between 3000BC and now, Hebrew has become even more retarded, and even more widely spoken. Luckily, as one stage a fine young man called Hitler helped to stop the spread of Hebrew by ordering a mass culling of those who spoke Hebrew.

Hebrew (He-brew) also known as Habiru (Haba-beer-you) was only drunk by nearly all men at the time, but only the most manly could handle the ridiculous number of side effects of the drink (which are a result of the high content of whoop ass). The most minor of these was insanely slurred speech (which evolved into modern Hebrew), followed by loss of vision, loss of balance, loss of consciousness, loss of limbs, SESH and/or genital pains, spontaneous combustion, and finally, death. On a side note, another side effect of all these side effects was the loss of your wallet, the keys to your sporty new donkey-pulled cart, clothes, and also the loss of your virginity.

For those without comedic tastes, the so-called experts at Wikipedia have an article about Hebrew language.

The uniquely peculiar sounds of the Hebrew language could be a result of primordial Hebrew speakers infiltrating earth from outer space like so many cosmic fifth-columnists. This theory of Hebrew's origin is given weight by Hebrew speakers themselves. They often cite a powerful bearded guy (see below) who, by all accounts, still does not live on earth. Mars and Jupiter are hotbeds of Hebrew speaking.

The Hebrew alphabet (aleph-beth) is set apart from all other alphabets and wanders about in a strange land — or rather on sheets of paper that are impossible to find afterwards, even when they aren't sewn into clothing. To read the Hebrew alphabet, you must first know what you're reading. You may think that other alphabets are the same, but they're not. Hebrew typesetting is a long and arduous process which involves lots and lots of tiny dreidels.

The Hebrew alphabet has lots of little dots and tiny squiggles below the words, called "Niqqud" or "Nikon Coolpix P7700". Nobody knows quite how many types of little dots there are below Hebrew letters, except for a small elite group of people who control all of the world's media, most of the world's banks and feed gravy into George W. Bush's ear through a funnel. The number of dots is the most closely guarded secret in the modern age. These dots are secret codes that were used to confuse the Germans during the war. So for instance, a ":" under the letter "ד" means there is a Dalek coming to exterminate people.

One of the amazing things about the Hebrew alphabet is that it has 22 letters. The number 22 is special to the people who speak this language, as if you look carefully, it looks like someone's nose. In fact it looks like 2 noses. Hooked noses, with bushy eyebrows hanging over them.

The Hebrew language is quite difficult to pronounce. There are lots of sounds which you have to get used to, and are quite different to those of other languages. For instance, the letter "כ‎" has the pronunciation "Fomoominoominoo", "צ‎" has the sound "Gargoyle", and "ב" is pronounced as "Boingy Boingy Boingy".

However, beginners should not try to pronounce them. When they come across a word which they are confused about, they should simply either pretend not to be able to read it, or to say "Oy vey." This is a universal sign of exasperation, which achieves instant communication without needing to clarify what the utteror is exasperated about.

Some sounds in Hebrew seem similar to sounds in German. Despite this, German and Hebrew have nothing in common and never have had. German is a pure language, spoken by fine specimens of a healthy race hanging around in pristine hills singing "The Lonely Goatherd" and milking the cows with their hair in plaits, whereas Hebrew sounds more muttery, befitting speakers hanging around in darkened rooms with lowered voices while they hatch global plots to endanger all mankind.

A common word in Hebrew is shalom. It can mean everything from "hello" to "fuck off". However, it doesn't normally mean "fuck off", coz that would be disrespectful.

Hebrew verbs are made up of three consonants, which then have the living daylights inflected out of them. The vowels are not written because they change too much, and sometimes go away altogether. As do the consonants.

Those 22 letters and uncountable dots and dashes are arranged in two distinct styles:

In the Holy Land, people pick and choose from these styles. This is to frequently remind the listener (1) that they are kin to God's chosen band of dirt-herders, to whom He deeded that entire plot of desert, as opposed to this riff-raff that has turned up; and (2) that they are no relation and are not looking back.

Speakers of Hebrew frequently suffer from diseases caused by the use of such a complex language. Hebrew has been called the holy tongue, because many speakers develop holes in their tongues which later cause the tongue to fall out of their mouths. (In Biblical times, this was incorrectly attributed to leprosy.)

Speaking Hebrew can cause some sufferers to become attacked in the street due to the pheromones released when it is spoken. Some people are so impressed by their linguistic abilities, as speaking Hebrew is so hard, that they are irresistibly drawn to the speaker, which can have tragic consequences and even lead to some of the worst illnesses of all — sexually transmitted ones. These STDs include yourmotheritis, and the deadly but hilarious killerrabitconnoisis.