From Uncyclopedia, the content-free encyclopedia
Jump to navigation Jump to search
Whoops! Maybe you were looking for this article to PICK?

For those without comedic tastes, the so-called experts at Wikipedia have an article about Nose. 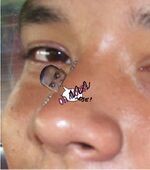 “Everybody has one, but they always tend to be overlooked...”

A nose (plural neese) is an appendage on the end of your elbow, or very rarely, your hip. Nose is sometimes called a nose because nose is thought to stand for Not anOther Sticky Elbow (appendage). However, this was made up by George W. Bush. Nose is really a shortened form of the word noselectionitionialistly. No one knows what this word means except Chuck Norris but he ain't telling and we have no way of making him talk. Awww...

Noses have several uses. These include

Ok, they are totally useless. That is besides the point, however. To find the point, click on this link.

In this day and age of experimental drugs and incest rates at 50 year highs, more and more people are born without noses. This has made the nose a top selling organ on the international black market, with some noses going for over $70,000 (or about 50 goats in rural countries). "Nose-harvesting" as its called in Uzbekistan is on the rise. In the USA, about 400 noses are harvested each year. Naturally, this has caused some concern among certain celebrities, Gonzo chief among them. Incidentally, Michael Jackson has recently laid off his own bodyguards.