A letter, not to be confused with the modern letter "A".

“Maybe if he went with some "L is for Lettuce" or "B is for Broccoli", he wouldn't be a wound- up, ADD-addled, blue sonuvabitch.”

The Letter, A brief history[edit]

In the beginning, there were no letters. Early peoples of the earth only needed a club and their wits (which arrived later) to get through life, soon hippies arrived and ruined everything. With their infernal need for "community", and "communication", they forced an early alphabet upon the unwary cavepeople and their neighbors, the Johnsons.

For a few decades, everything was good, until the cavepeople and the Johnsons discovered washing, and the hippies didn't. This development forced the two nomadic tribes to move on, and spread civilization, and with it, more letters. 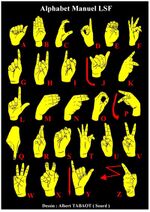 How deaf people make letters. Because they can't speak.

It wasn't long after the Fall of Rome that the impact of these roving societies was felt. Dozens, of languages had sprouted up, and with each of them came new letters and alphabets. Many, such as Sandscrit and Aramaic, died out after a few thousand years. Others, such as Ebonics, just done sprung up in da hood yessaday.

While the onset of letters (plural) quickly turned the primitive, beastlike peoples of earth into modern, beastlike people, it didn't do much for certain kinds of communication. Poets and rappers responded, by inventing letters (single), a word brought into being because it was a piece of paper with a multitute of letters (plural), in sentences and stuff. These inventions were good for romancing a girlfriend, or thanking a grandparent for that sweater at Christmas you didn't really want.

In recent times, letters have sprung up in everything from cereal to cinema. To this day, letters has a movie career rivaled only by Hollywood's top actors and actresses.

During letters' movie career, it picked up a nasty coke habit, hung out with Charlie Sheen, and generally had way too much fun with the hookers, if you know what I mean. It was only after a nasty brush with the law, a near fatal accident, and letter combination ph's suicide did the rest of the bunch check themselves into a Malibu rehab facility.

Six months later, they graduated from the clinic and started touring the nation with Widespread Panic and O.A.R., seemingly cured of all that ailed them. They still make appearances at colleges and high schools around the country, but only when touring season is over, and only for a hefty price of 1 dollar.

The Letter Pecan in Times New Roman font. It is extremely difficult to write by hand.

CEGINORSV; all other removed according to Vandingo and DEAL WITH IT!