For those without comedic tastes, the self-proclaimed experts at Wikipedia have an article about ↑. 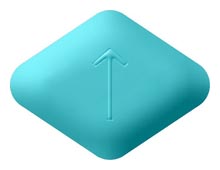 ↑ is sometimes a variant of ^. Unlike ^, however, ↑ sometimes represents the urge to jack off.

↑ has also been used as a weapon in neomedieval times, used to impale a knight's opponent in a ↑ing match.

Its origins can be traced back to Vlad the Impala, notorious for surrounding his castle and royal court with thousands of ↑'s upon which his enemies were impaled, flattening their tyres and slicing their still-beating hearts ruthlessly apart. The ↑ was to prove invaluable to Vlad in his long and bloody war of attrition against the Suzuki Samurai, that warrior from the east who chose mayhem, destruction and death by the ↑ as preferable to the dishonour of pacifism and defeat.

If you were to press ↑ in conjunction with Ctrl, it will send you to the moon. This was recently used by NASA in their latest lunar mission. Unfortunately, this action only sent the technician who pressed the button to the moon — not the astronauts in their ships — and he promptly suffocated and died. On clear nights, one can still see his lifeless body lying on the surface of the moon surrounded by green cheese.