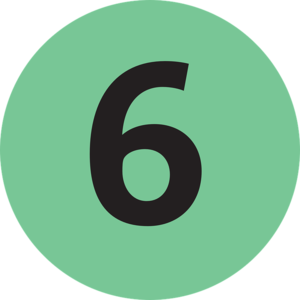 What was formerly known as the number six

~ The researcher on making his discovery

The number six was classified as a number from the creation of numbers in 1752 by Edward Number until the sixth of May 2016, when a group of MIT researchers who were studying the digit discovered that it was in fact an upside-down nine. Historians believe they traced the misidentification down to the man who was in charge of printing Edward's original paper. He apparently got two of the nines and put one after the five - upside down so as to look different - as he thought there should be nine digits instead of eight.

After its introduction by the printer in 1752, the number six had a happy childhood, as the fostered child of the letters Q and π. It was good at every subject in school except Math, at which it sucked. Despite a brief stint of drug addiction in 1769, it studied Geography in university, earning a PHD.

In 1823, the number six married the number nine and, together, they plagued the world with 69 memes. A long lasting and happy marriage it still lasts today. They had fifteen children who were all put up for adoption.

When its fraudulence was discovered in 2016 the number six went into hiding with its wife. On the run from the FBI they continue to populate the internet with 69 memes together. It has been speculated that they have made contact with alien life and will leave for Mars one day, signifying the end of the era of 69 memes.

Though Satan's phone number is 666, the number six confirmed in 1973 that it has no relationship or contact of any kind with him.