Printers are domesticated, ink-shitting animals that shite ink on paper. They are captured in the wild and trapped in cardbox boxes, much of which is done outside of printer-manufacturing companies, hence few have ever seen wild printers. After being tamed, they eat electricity, ink and paper.

Printers may be tamed by plugging their leash, also known in technical jargon as printer cables, to a personal computer, with appropriate software for taming them. They are often adopted as pets, due to their value of their ink excrement on paper. The quality of their excrement, also known as printout, depends on the ink, paper and mood of printer. 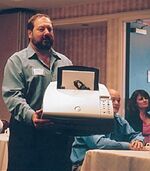 Billy Mays taking his pet printer to the IT Destruction centre, see 'Cruelty' for more info on this.

Printers are well known for making a lot of noise. They often disintegrate themselves or, if very angry, cut paper or screech and destroy themselves over nothing (they are stapled in their heart with a 'LEXMARK' logo when they are caught and sold.

The original printer, first discovered in 1432 and now bordering on the brink of extinction (ICNU Red list says they are Critically Endangered, Possibly Extinct) but they are nubs anyway. They are sometimes called "Rosenberg's Printer", named after its original discoverer. These are characteristically large and brown, with wooden frames instead of plastic. They are easily tamed and domesticated, though playful at times. They often will use their entire underbelly to press words onto the page, and require a lot of time to set up and use correctly. They have also been known to replace the letter 's' with an 'f', and add an extra 'e' to many words in awkward places. There are currently no computers, operating systems, drivers or leashes that will allow them to interface with your documents; you must set them up manually.

These printers are capable of excreting broadsheets, books, and political pamphlets.

Now an endangered breed nearing extinction, although not so as Gutenberg's Printers. Characteristically bulky and boxy, the only paper they will eat is that linked-paper-with-those-weird-hole-punched-strips-that-you-can-make-into-springs. Their image quality of their excrement isn't very good, but they are fairly compatible with modern computers and many older ones. Their specifically unique ability is to create the page using tiny little dots, similar to the art of Sadism. The Industrially owned ones were capable of excreting coloured ink, although reports indicate that wild and home-owned ones were at this point still printing in black and white.

These printers were mostly used to make documents and ASCII drawings. some of the larger, industrial breeds were capable of color newspapers.

A relatively modern breed, the bubble jet printer is now endangered, but in their heyday, they competed successfully in the wilderness with the Dot Matrix and beat them into submission. This particular breed was somewhere between the Dot Matrix and the next breed, the Laser Jet. They varied in size, and some were bred for various skills. Some were capable of color, some were specialized for show jumping, and others for photos. People also began experimenting with new papers and trying to produce new inks, and the Bubble Jets were soon the most diverse breed ever.

Capable of printing envelopes, documents and photos. They would often smudge, though, and were quickly replaced by the next breed in the evolutionary chain.

Laser Jets tend to be far more hostile than the other three breeds mentioned thus far. The name would suggest speed and violence, both of which are hallmarks of the Laser Jet. They were simply faster at printing and their ink dried instantly, whereas some of the inks produced by the Bubble Jet breeds could take up to thirty seconds. These are still the most commonly kept of the breeds today, making them the current top breed. Their violence has beaten out the Bubble jets, their sizes and capabilities are far more than the Guttenberg's and the Dot Matrix, and they are relatively cheap to own. They store toner and can last on it for almost years.

These are far more versatile than the Bubble Jets, and are capable of photos, envelopes, documents, pamphlets, t-shirts, small dogs, and even posters.

This family includes all of the printers that have been crossbred and undergone genetic modification with Scanners to result in what are commonly known as Xeroxes, and which operate via the process of Xerography. They are much like the Laser Jet printers, and are very often found in industrial settings. They have an excellent memory, and are capable of functioning with or without a computer. They will scan, copy and sometimes even fax (via The Xerox Link) your documents. They are dutiful workers, although they are very playful and often like to eat things that they're being asked to copy, or sometimes jam up and require you to insert your arm to retrieve them. They are not as commonly owned by non-industrial sites, because of their much greater cost.To entertain themselves printers enjoy jamming and claiming they have run out of paper and then not opening to let u look.

Some of the above printers (with the exception of the Xeroxidae) are bred for size and used in large, industrial plants. Primarily where newspapers, books (both Hardcover and Softcover, depending on how long the excrement is allowed to dry), magazines, boxes, bottles, and large-scale commercial fliers are printed and made. The Olde Worlde adapted to allow electricity and computer "interfacing", and bred for endurance were the forerunners of the first Industrial printers. Once they were crossbred with a haberdasher, it was possible to make and bind books all in one facility. Of course, the printer would be very large, perhaps the size of a dragon.

The domesticated printer feeds mostly on Toner,many thrown-away printers have formed a large group and are planning to destroy the world after discovering the cost of printers is less than the cost of cartridges. an essential source of Vitamin PG40 (also found in Black Ink Cartilage, another favorite food). Printers have also been known to survive for weeks solely on the fingers of those daredevil jerks at the office who are always doing things like eating staples and calling "Customer Service". In the wild, they have been witnessed creating their own ink by crushing berries, ants, and mice into a paste; of course, wild printer "printouts"--a scientific term referring to the droppings--are far less sophisticated than those of a domesticated one.

Printouts are often very informative to scientists studying printers. They often tell the printer-biologist--sometimes known as "Tech Support"--what kinds of commands the printer has been taught, and sometimes even whether the printer is ill. Printouts are considered a delicacy by many executives.

Due to the intensive domestication of the wild Printer, beginning with Charles Baggage's discovery of the now-extinct subspecies Printerra Differentia Enginum, there are currently no known natural Printer habitats. However, due to the predominately stoic and sloth-like nature of the current domestic and industrial breeds, it can be assumed that any such habitats would most likely be found in Australia, where there are numerous varieties of relatively fast-growing Paper Back trees to provide suitable nutrition.

Printer owners often take them to a recycling center, were they pay to have their printers killed, it is sadly legal if the owners have them crushed though, this mostly happens in the UK.

Printers are generally solitary creatures. When disturbed by their hosts, they growl and hurl excrement at the source of the disturbance. However, lacking appendages, their excrement often lands on themselves until someone has enough pity to clean it off. When approaching a printer, always be careful to clean it with only the tips of your fingers, as they will bite if given the chance. Some of the larger breeds are also capable of spewing excrement from separate exits; when this behavior is exhibited it is usually very systematic.

Printers are grumpy by nature. They do not like to be disturbed, especially for "jobs". The Print Queue was invented in 1979 as an attempt to reign in control of the beasts. It is a simple device that slowly trickles the printing requests to them, while tricking them into thinking "this is the last one. I promise." Which somehow seemed to help. The print queue does sometimes fail, however, resulting in massive system breakdowns; sometimes so serious that one may need to bring their pet printer to a Veterinarian Technician. These cases are rare, and the creatures can often be placated with a little bit of time and care, and some mild field surgery.

At times, a domesticated printer may behave oddly and erratically. This may be an indication that it has been possessed. For more information on how to exorcise possessed printers, see: HowTo:Exorcise your Printer