G is a letter that was invented and patented by Bill Ates and is the sole property of Microsoft. The letter has gone under constant revisions and updates; G8 is only the latest. It is not valid within the current HTML specification, and cannot be displayed by any non-Microsoft browser. Any attempt by a puny browser such as Mozilla Firefox to display the character will result in the destruction by fire (hence the name firefox) of the computer and any other objects situated in the same room (the computer user, for example).

Therefore to prevent any harm befalling users all browsers render G as G. Also the name for God among the Christian ethnic minorities in Tokyo.

G is also the coolest letter of the alphabet. When you add G to the end of your name, you become infinitely more cooler. For instance the plain old 'Fred' becomes 'Fred G', 'Ali' becomes 'Ali G' and so forth.

This letter is forbidden to have any international symbolic meaning. See above.

You cannot count to G.

Saying The letter "G" five times in front of a mirror summons a poet, John Mole, who is usually quite grumpy. 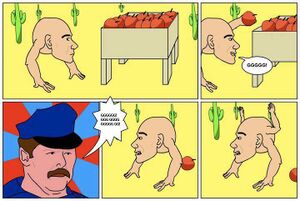 What happens when you say "G" 5 times before a mirror.