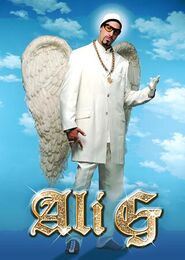 Ali G (born 1 April 1971), formerly known as Alistair Leslie Graham before his induction into da West Staines Massiv, is a highly dangerous and fearsome individual. He has gained a large following among his urban youth subculture, and is revered by many for his sick rhymes, tight gang-bangin' skills, and searing social commentary on the decay of urban society.

Despite the constant admiration and "respeck" that has been put on his name, Graham has been parodied numerous times by social satirist/DJ Tim Westwood. Although Westwood has not explicitly named Ali as his target of satire (for fear of drive-by retaliation), he has made several allusions that he is riffing on Ali G's reputation and mystique.

For the batty boys who can't get no restecp, the East Staines Massiv have an article at Wikipedia about Ali G.

Graham was born and raised on the tough streets of Staines, deep in the heart of Berkshire. He lived with his grandmother on 36 Cherry Blossom Close, at the centre of the Staines ghetto. Ali has never made comment upon where his real parents are, and it is presumed that they were killed in a drive-by shooting. He was educated at da Mattfew Ahnald Skool, a form of juvenile detention centre, where only the toughest and most streetwise of children survive. It was here that Ali first started his life of crime, dealing baseball cards while they were banned, as well as masterminding an Atari theft racket.

It was also at da Mattfew Ahnald where Ali recruited the fellow criminals that would represent his crew to this day. To fight back against the tyranny of da East Staines Massiv, as well as the Los Angeles Police Department, Alistair formed da West Staines Massiv. He inducted himself and other members through a brutal gang beatdown to strengthen themselves against the harsh realities of living in the ghetto. After initiation, each member would be given their new nickname, which Ali still uses to this day.

He has made it a point to clarify on several occasions that he is not Ali A, not Ali B, not Ali C, not Ali D, not Ali E, not even Ali F... but da main man, checkedy-check, is ALI G. 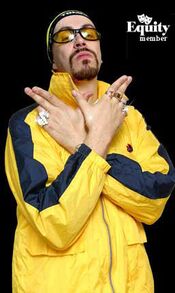 Ali G and his crew, including such noted felons as Ricky C (AKA Richard Collins) and Dangerous Dave (AKA David Desmond Hume), started out their lives as criminals by frequenting many gang-banger hotspots in Staines, such as the swings at the park, the Staines Library, and Kentucky Fried Chicken (the choice restaurant of any true upstanding African-American member of society). Since their formation, da West Staines Massiv have committed an uncountable number of crimes, many of which have been so professional that neither the LAPD nor victims notice or report the crimes. It is because of this astonishing skill that they have as of yet not been convicted, nor even suspected of any specific crimes.

In 2003, Jeezy F (AKA Jacob Harkington-Fields) was excommunicated from the group for wearing green, the gang colour of the Ivy Heath posse. He had been previously warned about letting his mother wash his yellow jersey with his brother's blue non-colourfast football socks. The West Staines Massiv took retribution upon Jeezy by removing the caps from his bicycle tires, letting all the air out.

Note: It used to be a requirement to have never had sexual relations with Ali G's Julie. This was dropped, as it would effectively rule out his entire crew. 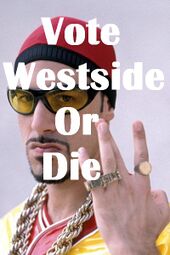 Ali G's political acumen and understanding was first acknowledged by Deputy Prime Minister Charles Dance in 2002. Ali G was chained outside his office in protest against the plans to demolish his youth centre, a move condemned by Ali as being "totally slim-shady", and would ensure that most of the Staines' younglings would not reach the age of 12 without being killed in gang warfare. The Deputy Prime Minister, recognising Ali's leadership qualities and potential, encouraged him to run as MP for Staines. Ali G's sensational reform aims, as well as his excellent community-relations, proved highly popular and after exposing David Cameron as an equestrian-pervert, catapulted him to political power.

After being instated as Prime Minister Michael Gambon's right-hand man, as well as reassurance that the job title did not include any questionable duties, Ali G brought in social reform legislation concerning areas he felt that the law failed to interpret properly. He introduced the Feminism Reform Act 2002, which lowered tax on certain electronic applications imported from Sweden. He also attempted to fully legalise marijuana, but sadly only managed to lower its drug categorisation back down to a class C. Another unsuccessful attempt was to reform the A-Team in a bid to clamp down on crime.

Ali G's short but distinguished career was brought to an end when it was found that, in order to quell a row concerning his latest attempt at providing a tax discount to pornography retailers, he had drugged the entire Parliamentary committee. While his aim was honourable, several bureaucrats considered Ali G's methods to be at fault, and forced him to resign, despite his positive public perception and political standings. He was given a standing ovation by the House of Commons on the day of his departure. Further controversy hit when security footage captured of Ali G having sexual relations with his partner was mistaken for what appeared to be the Prime Minister soliciting services from a common prostitute. Ali G was outraged at this news, and was quoted by friends and colleagues present at the time as saying "That ain't no prozzy, that's me ho!" 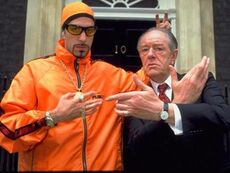 Unable to tolerate this injustice, Ali G set out to clear Prime Minister Gambon's name. In the process, he uncovered deep political corruption and exploitation conducted by Deputy Prime Minister Charles Dance, a man deemed to be even more tyrannical than Skeletor. After surviving an attempt on his life by Dance, Ali G recovered the sex tape and with the aid of the elderly community, stopped the illegal demolition of his Youth Centre. After his example had inspired Dance's personal assistant to do good, she also provided evidence to corroborate Ali G's claims.

With Dance imprisoned and the old Prime Minister reinstated, Gambon reoffered Ali G the position of being his right-hand man. Ali G declined, stating that he had shown him the way, but now the PM must use his own right-hand. Ali was given a grant to keep his youth centre, and continued running his Young OG's club and instructing "da yoof" on gang culture, street justice, and urban warfare. Prime Minister Gambon has since been replaced, and the UK is now run by a party of bent politicians who make Ex-Minister Dance look like Jesus in comparison. In a recent interview, Ali G has commented on how they are "even mo' evillers than Skeletor and Lex Luthor Vandross combinatronicined"; he also threatened to come out of political retirement "to sort those bellends out, once and fo' sho'", if matters do not improve. 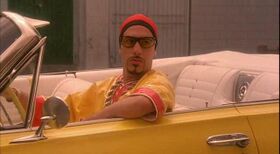 Patrolling his turf for those Eastside batty boys.

Ali G is an avid lover of rap, hip-hop, and bouncy techno when the occasion calls for it. He is known to never remove his cap, as it helps retain the artistic genius and cunning organisational skills inside his head. In his spare time, when he is not reading Dostoyevsky, he likes to imagine vivid sex scenes, interwoven with depictions of stylised violence.

Ali G enjoys smoking copious amounts of da kush, and has stated Moroccan Black to be his favorite. Ali G used to be a highly successful DJ star, 'till a freak MCing accident caused him to lose mobility in his main mixing finger. He has since been rendered disabled by this incident, and leeches off the NHS and government welfare to support himself after this tragedy.