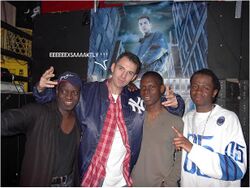 Tim, with his three brothers Gregory, Rupert, and Terence.

He hosts his own radio show on BBC Radio 1, in which he delivers heavy hit after heavy hit after heavy hit to his own credibility with each passing minute. Aside from his radio show he also presents MTV's Pimp My Ride in the UK (As well as the off spin "Pimp My Bitch), and a new Channel 4 series called The Big Dog, which takes a look at abnormally large dogs. He is also a regular guest on Matthew Wright's the Wright Show broadcast on the Ecurie Ecosse galic language Scottish language service as well as Wigger TV in America.

WE'RE GOING IN HARD BABY With Some Background Info![edit]

Despite being born through an anus and educated at McDonalds, Tim speaks as if he belongs to a crack-dealing street gang from the south side of New York. Tim's father Bill, a Catholic priest, has put Tim's behaviour down to Satan switching Tim's soul with that of a black south-side ghetto boy some time in the 1980's, and vice-versa. This means that somewhere in the world there is a black south-side ghetto boy who acts like the angelic, slightly poofy son of a Catholic priest. He has yet to be found, if he is still alive.

For those without comedic tastes, the self-proclaimed experts at Wikipedia think they have an article about Tim Westwood.

Shortly after acquiring his new accent Tim moved to London and began a 5-year free-style busking marathon outside Virgin Megastore on Oxford Street. Senior BBC producer Andy Parfait, whilst shopping at Virgin for Enya box-sets, spotted Tim's enormous potential and hired him on the spot out of pity. Andy had been intending to take Westwood to the filming department for a documentary called Freaks on the Street, but, since Westwood was drunk at the time, he got lost at the BBC centre and stumbled into Radio 1's broadcasting studios instead. The rest is history. 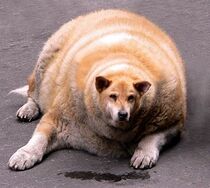 In 2002, the RAF attempted to enlist Westwood to help in the Afghan war. Senior RAF personnel had expressed the desire to strap Westwood to the underside of a jet so he could "drop the bomb" on Taliban positions with lethal accuracy. However, Westwood declined saying "that's not the way we get it in" and hoped that in the future, the RAF would "keep it real". Sources[1] say that the real reason behind Westwoods reluctancy in joining the war against the Taliban was that Westwood has substantial investments in Afghanistan's burka-industry.

Westwood's Show On Radio 1, That's How We Get The Job Done![edit]

Westwood gives the order to drop the bomb.

First time listeners to his radio show can be forgiven for thinking they have accidentally tuned into a Los Angeles underground hip-hop-club-DJs private after-party, such is the raw energy and "growling crunk flavas" that roar out of every minute of the Radio 1 Westwood Rap Show.

Tim keeps his audience entertained with made-up phrases spoken in a thick Brooklyn/Surrey accent, while special guests such as Eminem and Bob Hoskins clutter up the studio, shouting, swearing, free-styling and playing Boggle. After Hoskin's death Danny Dyer provided some material but had to be subtitled which could not be achied on radio.Occasionally, the latest "fresh cuts" (records) are played along with a variety of sound-effects, including explosions, air-horns, malfunctioning merry-go-rounds and bleating goats. It also uses the cries of dying unicorns to add drama to Westwood's famaican accent. 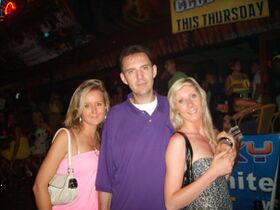 Westwood and a pair of bitch ass ghetto hoes from the tough streets of Chorley.

Big Up These Related Articles![edit]