“If there was only five British terrestrial Television channels I would allow to be aired was I god, I would most likely choose Channel Four to be one of them. That is probably down to that great show about homosexuals, though.”

Channel Four (not to be confused with 4Chan) is The Other-Other option when it comes to television broadcasting in the United Kingdom and the rest of the Empire (which includes Spain and Northern The Hoobs), except for Wales, although everyone in Wales watches it, because no- one sober can face S4C. This channel made a name for itself when it decided to put an end to Southern-based television shows, with the highly popular Brokeback Side, a take on a small homosexual commune around the city of Liverpool.

For those without comedic tastes, the "questionable parody" of this website called Wikipedia have an article very remotely related to Channel 4.

4Kids Programming (Not related to 4Kids)[edit]

Start of a new era in televisual delights[edit] 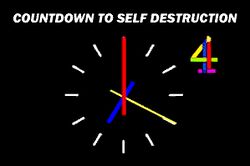 Some might say the Countdown to self destruction has already begun.

When the second show started, there was a serious amount of controversy. Originally planned to be titled Countdown, the show stirred up unrest in the lower classes as the show, then titled Countdown Your IQ, Which Doesn't Take Much, You Working Class Prick Who Clearly Needs a Job/Life insulted almost everyone.

In a fast response, Channel Four Execs came up with what they called, a 'Fricking well awesome plan'. They would show the News, and they would avoid talking about all the nonsense and just talk about what matters; the likelihood that we won't live out our lives to the full due to imminent Global Warming, Bird Flu and 'The Western World Being Taken Over By Men In Turbans Shouting A Lot'.

It was a huge success. People were so scarred they didn't want to leave the house to riot, they wanted to stay in their bomb bunkers with built in television sets.

Channel Four puts an emphasis on great cinema. Classics like Tim Burton's Planet Of The Apes and Some Really Poor Directors' Jason MMMMMMMMXVI, with a healthy dose of teenage slaughter with the Academy Award eligible Final Destination series to tidy things up.

Britain is a very undecided nation and as such, it's people need to constantly be reminded of what is great and what isn't. Always happy to oblige, Channel Four now show the '100 Greatest..." series every 2 months (just in case people forgot what was cool or not) which also helps to sate the masses hungry for their next Big Brother fix.

And Many More...on Channel 4...Sex and Gore, Violence and Vore.