Not to be confused with Avian Flu, try here 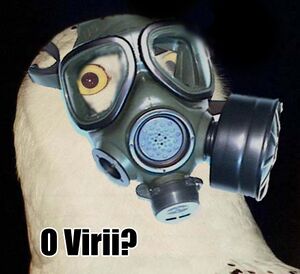 In order to prevent infection, necessary precautions must be taken.

Considered the female strain of "Man flu", Bird Flu (also known as Asian Bird Fru) is a virulent form of influenza, and is all set to become THE number one death dealer of 2037, overtaking mosquito bites and Kitten-Microwave-Related Deaths and having a 95% (proved by scientists in 2004) potential of causing the complete extinction of the human race. The virus is believed to have begun in the laboratories of the Avian League, an organisation with links to the War on Terror.

Now, however, bird flu has been completely forgotten by swine flu, which is, contrary to public opinion, far less deadly than the terrible flu of bird.

Chicken chowmein, a staple of the Chinese, an Asian people whose cuisine is widely appreciated in the western world - more so than the people themselves - is reported to be suffering in sales as a result of media coverage of the bird flu. Since the news often reports the disease spreading in Asia, people are wary about chicken dishes that come from Asia. The chow mein's saving grace is that many people don't know it contains chicken, as they know it by the number which represents it on their takeaway menu. Chicken chow mein's most common number is believed to be 42. Adding to this is the popular belief that the Chinese incorporate the meat of animals inedible by western social norms - in fact during the 1994 outbreak of cat flu, 42 is said to have lost popularity also. 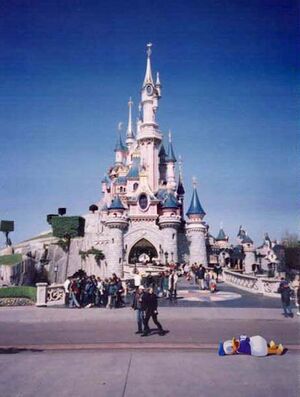 The first victim of Bird Flu.

The Bird Flu should not be joked about, if you find some bird flu on the ground, you should report it to the OMG ITS TEH BIRD FLEW! association at once by calling 1-800-OMG-I-FOUND-A-BIRD-FLU-ON-GROUND- AND-I-THINK-ITS-GOING-TO-MUTATE-AND-KILL-ME-SOON-SO-I-BETTER-CALL-THIS- 1-800-NUMBER-AND-REPORT-WHAT-I-SEE.

More importantly, Governments of various countries are trying to control the number of people dead by Bird Flu. So, if you are dead or almost dead due to Bird Flu, call 1-800-OMG-THE-BIRD-FLU-IS-KILLING-ME (toll free if in Samoa). Your friendly Bird Flu call center will guide you over the phone step-by-step to make sure you are not infected by Bird Flu. They will accept American Express or Visa as a method of payment for the $59.95 per minute hidden charge of the toll free line.

If you see anyone on the ground that has been infected say: ha ah u got owned and call HA-HA-U-GOT-INFECTED-AND-DIED-BUT-I-BETTER-CALL-THIS-NUMBER-BECAUSE-NOT-TELLING-SOMEONE-IS-ILLEGAL-AND-I-MIGHT-GET-ARRESTED-SO-THATS-BAD. then you walk away and let the dead or dying guy rot. If the police find you, you're stuffed.

This virus was reportedly developed by former indonesian president Soeharto as a revenge for taking him off his presidency. It was then taken over by the Jewish community in Aushwitz during the Holocaust of World War Two and developed as a biochemical weapon to combat the New Millenium Cyanide Christ (MESHUGGAH). They had also developed the vaccine called tamiflu which they created as a way to generate billions of dollars in profit.

Another theory is that chili, bottled water, face-mask, canned fruit and various other companies all got together and made a plot to make up a "Bird Flu", so that the normal dumbass American would stock up on their supplies. As Mr. Burns would say "Eggselent".

Be warned. As Bird Flu starts to take over your body you can expect to encounter a variety of symptoms. Including...

You can make a self diagnosis by throwing yourself off a cliff. If you fly, you have bird flu and will most likely die. If you don't fly, you are safe for the rest of your life (which depending on the height of the cliff could be anywhere between 2 and 20 seconds.)

Bird Flu should be given the same level of importance as the deadly killer virus that swept the world a few years ago and nearly obliterated the Human and Elephant Rodent Population. It has been clinically proven by Chinese peasants that it is at least as potentially lethal to the planet's human inhabitants as SARS was. 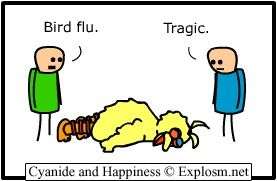 Another victim of the flu.

Bird Flu can be caught through a number of methods:

Currently the virus has been restricted to Belgium and the whole of Asia. It is believed that the 87% of birds that can fly are less of a threat due to President Reagan's Star Trek program, where trained sharks with lasers on their heads are ready to shoot all airbound attacks.

The greater threat comes from those birds (or Avians as they prefer to be called) who prefer to remain ground-based. These include the Emu, Ostrich, Soeharto, Soekarno, and Penguins and it is believed that they intend to infiltrate country's defenses by walking under the radar.

Eminent Professor August T. Lucas has concluded that by the year 2008 birds will have become the dominant species on the planet, causing President Bush to unleash Kathy Mambourg.

Governments across the world are stressing that the virus can not be contracted from cooked poultry as cooking destroys the virus. What they fail to point out is that in order to cook the chicken/turkey/fowl, some poor slaughterperson had to die, followed by the poor chef who handled the raw carcass who probably then passed it on to the waiter who just sneezed over your plate. There is some good news however. Ladbrokes are offering favourable odds on both celebrity British chefs Jamie Oliver and Gordon Rams-ass contracting the virus.

George W Bush before and after the Bird Flu

The cure to Bird Flu[edit]

Hmm, just a little longer and then we'll find a cure, but for now, here's a few tips:

Like all illnesses out there, prevention is easier than catching the virus and dying from it. The Government have recently drawn up guidelines on the most effective methods to safeguarding yourself from infection.

If birds who have the Bird Flu could do this...then we'd be safer!