Some cooks label their pies, for clarity.

Pie is food in its most perfect form, and combines all four food groups: Sugar, grease, starch, and crunchy. Those who believe that pie is unhealthy are mistaken. Pie is available in many sizes, from family size (or snack size to the average American) to those little pies at the check-out line. Nobody makes better pie than Mom.[1]

The filling in the pie is usually fruit, but it is sometimes pumpkin and rhubarb; there are also meat pies, where the filling could in theory be anything, so watch out.[2] It could be four-and-twenty blackbirds;[3] you just don't know.

Pie is so yummy that the term has been adapted to describe other positive concepts, described below. 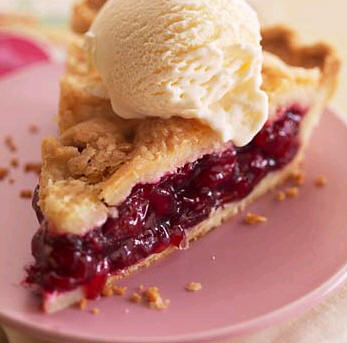 Pie began in the 17th century under the rule of King James I, when Guy Fawkes hatched a plot for a day of hilarious pie throwing at the Houses of Parliament, which was tragically misinterpreted and over-reacted to. But Fawkes was hoist with his own Pie-tard.

Pie was further refined in the workshop of Edgar Allen Pie, who gave it its current name (as Fawkes probably should have) and developed the first non-explosive filling.

Pie ran for President in 2012, as 89% of Americans said they would rather have a slice of pie than listen to Barack Obama. Most of these said it's especially true if Obama was speaking about healthy eating. Or a federal takeover of bakeries. 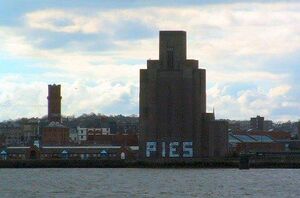 Pies are taking over.

Pie is slowly becoming a deity with millions of followers around the world that love and worship it. In the past, pie has done many great things, such as starting World War Pie. Pie's influence has been limited by the fact that people mostly ate any pie they saw, before it could achieve much. But pie is now the best-known pie in pie-land, with thousands of grou-pies. However, many are piesexual and a few are pie-polar. 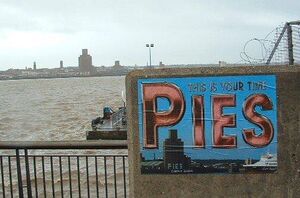 Pies are also taking over across the water.

In the future, pie plans to rule the world. (And it's not the only one.) To do this, pie will fatten every human up until he can't walk. Pie might eat humans as punishment for the consumption of valiant pie brethren (notably, pie Lincoln and pie Jesus.)

The number Pi (π) is about 3.1416. It is "about" a lot of other things, but it isn't exactly anything. It is how far you have to walk to get halfway around a circle of radius 1. No one wants to get just halfway around it, so get out your calculators. (Regarding area, "Pie are squared," my old, black-as-coal geometry teacher used to say, though the correct Ebonic is, "Pie do be squared.")

Wikipedia does have an article on Pie--and it even has a section on Pie throwing. Copycats!

The legislature of Ohio once notoriously ruled that civil engineers could use a value of π=22/7. (In 1992, they amended this to state that π=3 would be "good enough for Government work.") If you cross a bridge anywhere between Cleveland and Dacron, well, mind the gap.

Pie (symbol: Pi) is the 92nd element of the periodic table. It is a heavy metal, and frequently opens for the band Black Sabbath. Pie is frequently used as an oxidizing agent within industry, for rapid conversion of fructose to galactose.

Carbon pie oxide (symbol: C3PiO) is suspected as a cause of global warming. Some people say that further increases in this compound will coat the surface of the earth with a sticky glaze. And they're scientists.

“Would you like to come upstairs for some pie?”

~ The date you will never have, on pie

The term "pie" has been adapted to describe other pleasing natural phenomena that have squiggly edges and a creamy filling.

The euphemism hair pie has become widespread, ironically at the same time that many men and women have decided that they want her hair pie to be as hairless as her underarms. Just because nature put hair there doesn't mean it has to stay there, as everyone outside of The Netherlands now agrees.

The term moon pie is self-contradictory. The low gravity on the surface of the moon would make it hard for the filling to remain within the crust, and the very low atmospheric pressure would make it boil over instantly. Moon meringue is more likely.

Vegetarians have Alice B. Toklas brownies, but others can use the pot pie to surreptitiously add marijuana to the diet. Chicken pot pie is a marvelous way to put a buzz on under cover of following doctor's orders to eat more meat.

The Pol Pot Pie is a commemorative dish served by southeast Asian refugees who have opened ethnic restaurants in Newmarket, N.H.

When contemplating a meat pie, which is usually a hamburger pizza folded and eaten sandwich-style, do not order by the name of the mammal, nor accept just any pie having something to do with cows.[2] It is for vital clarity that English has a different word for the farm animal and for its meat.

Pacha Cutie-Pie is a primordial Inca luminary who figures prominently in the history of Perú.

The late Soupy Sales[4] popularized pie throwing with a generation of Americans.

Pie throwing is a sport, a hobby, a way to pass time, and a way to show affection for a coworker without possible sexual overtones.

Throughout our history, many wars have been started by a casual act of pie throwing. The innocent slapstick against Bosnian Archduke Ferdinand, unfortunately simultaneous to the backfiring of an early automobile, is a fateful example. So, when throwing a pie at someone's face, make sure he is looking away from you.

And just remember, Pie is a good name for a dog.