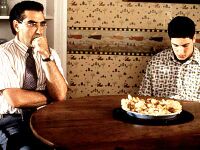 Recently there has been a sizeable piesexual pride movement called TSPPM (the Sizeable Piesexual Pride Movement), which has lobbied to give piesexuals the same rights as other perverts and vagrants.

Piesexuals gain notable, physical pleasure from sexual contact or stimulation with pies, and sometimes pastries. On desperate occasions, piesexuals may even use puddings. Common piesexual practices include "put cock in pie", "piebagging" and "wanking into a pie". Some pisexual persons shun "normal" sexual behaviour and instead commit themselves solely to the wonders of the pie. The dirty bastards.

Some piesexual people display fetishistic behaviour with only certain flavours of pie. The best known example of this was Chris Martin of Coldplay. Chris would only gain arousal from Holland's meat and potato pie, citing the fact that "it's more meaty than the others". Martin committed suicide in 1998 when the bureaucrats in Whitehall made them market it as "potato and meat".

The term piesexual covers a wide range of filthy activities, but can be more accurately defined as such: