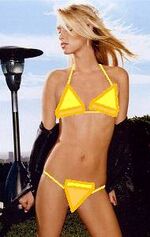 A lovely french female shows off the French bikini.

“What could be more finer than women and cheese - combined?!”

~ Oscar Wilde on the french bikini

Due to the popularity of the original bikini, the French had to come up with a new version which they could proudly call their own. Unfortunately, completely sane scientists were involved to create the french bikini, which was to be made entirely of cheese.

The French bikini still remained a two-piece outfit, but instead of the original being made from cloth material and cord, the new improved French bikini was created from various types of French cheeses. Various prototypes were made from Roquefort, Port-Salut and Emmental but it was legislated by the French Parliament that Camembert and Brie be used. It was stated that these two selections would be chosen because of their "aesthetic qualities of covering the female body". 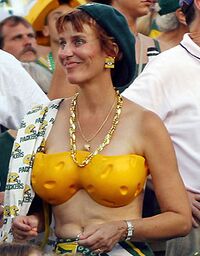 Of course, the rest of the world wanted to wear this marvel of French invention and despite the strict controls placed, thousands flocked to France to strut their stuff with the cheesy wares. After three days the death toll was 1,207 - mostly American and Lithuanian women. Some Bat Fuck Insane scientists from around the world created different cheesy bikinis.

The British bikini wasn't a great hit in England as the colour of Cheddar blended in with the pasty-white colour of British female skin.