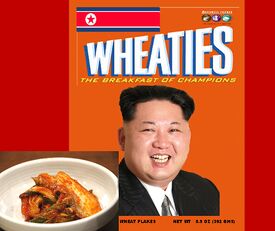 Kimchi (inset) is an essential part of the standard North Korean breakfast.

Kimchi (Korean: 김치) is a generally spicy dish made of fermented (pickled) vegetables. It is a staple of Korean cuisine, easily identifiable as such by having "kim" in the name. 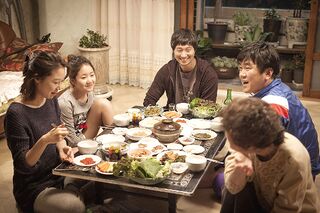 A family has a good laugh when a North Korean infiltrator is exposed when he does not recognize that the dishes on the table actually contain food.

Korea has a long history and long experience with fermented foods and drink. They have proven to be just the things needed after returning to one's burnt-out home after a long invasion by any of several neighboring lands.

Kimchi has been made from any number of seasonal vegetables with the pickling process extending the usable life of those vegetables. This was often whatever crop was minimally trampled by invading soldiers, horses and tanks. The job of sorting and picking the vegetables became the province of women, as men were off trampling vegetables in some other region of Korea. Nappa cabbages were introduced from Japan when the cabbages invaded Korea in 1453. They were easily defeated though they spread seeds throughout the countryside and have become a major ingredient of most kimchi today, along with white radishes that invaded from China in 1366.

Naturally, kimchi jars proved to be easy targets for invading soldiers so homeowners would booby-trap the jars with explosives or the family pet rattlesnake. This would actually prove to be very popular but fatal with diners, so hot peppers were added instead for an "extra kick".

Preparation methods and recipes were kept closely guarded by mothers intent on passing the secrets to their daughters to snag husbands addicted to kimchi. This caused great confusion as LGBT Koreans might or might not get family recipes.

Warning: Males should not read the preparation section, just in case the undead spirits of vengeful Korean mothers are present. 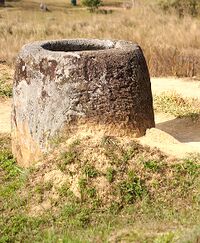 Large ceramic jars are used for the fermentation/pickling process. These are typically buried in the ground near the home. Burglars always go for the kimchi first, but might find grandma or a sniper on guard inside larger jars.

Various types of cabbage and white radishes are roughly cut and form the basis of the most well-known form of kimchi. Other plants and vegetables can be used, but most are ones found only in Korea or Asia so expatriate Korean cooks often improvise with plastic houseplants or potato leaves and vines. Commercial kimchi may include cabbage butt ends and stems along with grass and hedge clippings. These are often advertised as being authentic recipes, albeit for horses and pigs.

Lots of salt makes up the brining solution for the vegetables. Enough should be added so the preparer's heartbeat goes up to about 200 bpm when testing it. Garlic, ginger, scallions and sometimes other seasonings are added for flavor plus the all-important red hot chili peppers. Since the band members are heavily guarded, dried peppers are generally used. Sometimes small amounts of seafood like shrimp or anchovy is added for still more flavoring. Whole zebras are rarely used as they lend a gamey taste that most Koreans do not like.

Everything is placed in jars with the vegetables kept well below the brine surface to prevent contamination by dangerous bacteria or marauding soldiers infiltrating across the border. As it stands, the fermentation process already involves a laundry list of bacteria including the appropriately named Leuconostoc kimchii and Weissella confusa. And you get to consume all of them including those used by the facehugger in Alien to eat through metal walls. 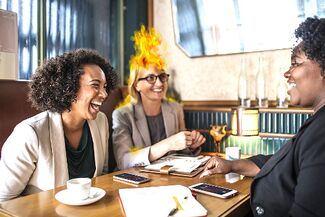 One of the diners has just burst into flame after having too much kimchi and not enough beer. Luckily, the furnishings are flame retardant.

Preparation methods and recipes vary somewhat by region and individual preference as expected. Around the DMZ, hand grenades are thrown in the jar to stir the vegetable mix. Pickling time varies by outside temperature and degree of flavor desired, so kimchi needs to be sampled to test. An elder member of the extended household is given this task as they won't be missed that much if the kimchi has not been properly prepared. In commercial plants, kimchi is considered ready to sell when it reaches sentience.

There are some elaborate and time-consuming preparation methods involving kimchi variants. However, the majority of Koreans no longer want to climb mountains in winter for the freshest wild vegetables or risk their lives finding mushrooms that only grow in minefields. So, these preparation techniques have fallen into disuse, being favored by going to the supermarket and buying whatever's on sale.

When ready, kimchi is rinsed of excess brine, cut into smaller pieces and served as a side dish with most Korean meals, whether it be breakfast, lunch, dinner, snacks, second dinner or what have you. Koreans truly appreciate the typically peppery dish and will have quite a bit at each sitting. Before the economic boom of the 1960s, it might have been the major part of any meal, with Koreans often placing a color picture of a pork chop on their main dinner plate to remind them of what they were missing. Well-off Koreans would then eat the picture, whereas the poor would carefully tuck away their black-and-white pictures for the following meal, if any.

Kimchi can be famously peppery hot. Diners often play Russian roulette with the dish. No deaths have occurred except from the common drowning by beer consumption to put out the fire. Chef Emeril Lagasse is now barred from entering either Korea after his signature "bam!" nearly caused a runaway nuclear reaction in a dish of kimchi in 2002.

The only effective foil to very hot kimchi is to consume vast quantities of rice and beer. However, it should be noted that eating or drinking large amounts of both will cause a craving for something salty and peppery, which would be kimchi. 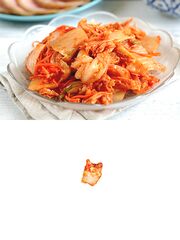 No Korean meal is complete without kimchi. Per capita consumption is up to 1 kg (2.2 lbs.) per day depending on how insistent the lady of the house is, plus whether or not she remembered to buy anything else other than rice for meals that day. Jewish grandmothers, though rare in Korea, are responsible for the highest levels of family consumption of the signature dish. Luckily, there are no incidents of diners exploding from too much kimchi as they are always careful not to attract the attention of the Korean CIA or local army units.

Today, most diners in Korea know to use magnetic chopsticks when eating kimchi to be able to detect shrapnel and shell fragments found within after a cross-border attack. Any bullets are detected by looking down at one's chest, noticing the hole and dramatically flopping over onto the dinner table.

As no meal is ever without kimchi in Korea, convincing plastic replicas are offered as a side dish to tourists in restaurants who typically push it aside and ignore the unrecognized dish in favor of meat. This accounts for occasional reports of extreme chewiness and blandness in Korean food. While this is true of octopus that is not fresh, live octopus is much tastier and tender. Diners often stage and bet on their live octopus dinners fighting over kimchi at the table.

For those without comedic tastes, the so-called experts at Wikipedia have an article about Kimchi.
Retrieved from "https://uncyclopedia.com/w/index.php?title=Kimchi&oldid=6100754"
Categories: