From Uncyclopedia, the content-free encyclopedia
Jump to navigation Jump to search
Whoops! Maybe you were looking for Barack Obama? 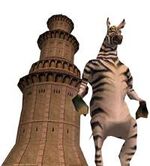 Your creature will eat its own shit more often.

“I know it's just a type of cake, but it doesn't feel right!”

~ The zebra on zebras

“It's a white horse with black stripes or a black horse with white stripes.”

A zebra (French: Ze garment which holds up ze bosom) is a mythical, unusual land-based creature invented by Al Gore, somewhat akin to the unicorn or the moose. The zebra is a boring animal with no particularly interesting traits. It is neither cute nor disguting, violent nor adorable, but is just fine nonetheless. Unlike its cousin the unicorn, the zebra, despite all its glorious fluffiness, does not exist, because that would be stupid.

Legend has it that the Zebra was initially decorated by Queen Victoria with yellow polka dots on a pink background, but these first run zebras did not last long. Such a design is not conducive to survival in the sub-Saharan climate of Siberia, and the obtuse little zebras were all too quickly devoured by the native jackal population. It wasn't until 1989 that the striped pattern was developed and a single male zebra of his type escaped into the African Savannah in a plane crash. This individual rapidly reproduced and as of this morning over 92 billion zebras now graze this savannah.

Zebras are terrible, violent pets with incurable tendencies to disembowel small children, and so when kept in captivity usually require special pens or, more rarely, pencils that can adequately contain them. The prized zebras grown by top-notch zebra farmers are usually housed deep in the salt flats of the Nebraskan Rain forest of '66, where the minimal amounts of snow, pleasantly cool climate and abundant sunlight produce the plumpest and sweetest zebras on Earth. A good dentist can usually pick them off from seven hundred paces, though in modern times this practice is frowned upon because of the potential for mass hysteria. Also, in recent years, research indicates that zebras have a fondness for spherical fruit, especially grapefruit, oranges, and many melons. Several successful hunts confirms this, showing that zebras may easily be captured by placing watermelons on flat rocks in jungle clearings.

The plural for zebra is zobrani. A male zebra is known as a zebrackle or zecklebrunk and a mature female a zebrukle. A young zebra of any gender is either a zebroozle or zoobrazzle and a female under breeding age a chucmishtavugglepuggle.

This new breed had been stumbled upon by mistake. Russian scientists were conducting experiments on water balloons, and their effectiveness in caves, when they found these evil versions of the zebra. 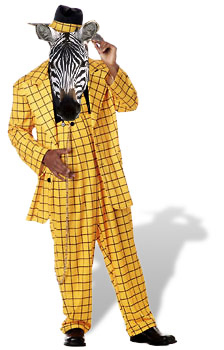 This "evil" zebra retains are the same features as normal zebra except for their evil nature. They are known to travel in hunting packs of up to 3 or 40. They are also slightly smarter then their counter-parts, although they are still easy to spot from a great distance. The usually charge their victims from behind with spoons and other easily obtainable kitchenware. Making school cafeteria and the back alleys of restaurants common grounds for them. Their main method of killing victims is to humper them to death. If sighted in your local neighborhood, a suitable method of escaping would be to stand exactly still. Nobody knows whether the fuck it works, but try it anyways.The Zebra has many different names, such as Flactiod, flarp or the muffin man. Zebras get these names due to their huge, wet floppy,hair,juicy tortilla

It is a relatively unknown fact that all zebras are invincible. To create the illusion that they are not they kidnap horses on a regular bases and paint stripes on them to disguise them as zebra. This means that when a zebra herd is attacked the much faster zebras can out run the horse and leaving them to die, inevitably leading to more horse kidnappings.

Zebras are actually more closely related to the hippo than to the horse or unicorn. More specifically it is mostly related to the fat hippo and they can be often seen sharing the same water hole, same jokes and generally have a lot in common.

Under the apartheid system in South Africa (176 BC - 2006 AD) Zebras suffered huge discrimination. Denied classification as "White" and rejected by the black community, Zebras were forced to use Elmo-only public toilets and excluded from all but Elmo bars. Elmo beer (brewed from hay and shit like that) was launched in 1982 and soon proved popular, allowing equines of all hues to become equally shit-faced, no mater the level of oppression they had to endure.