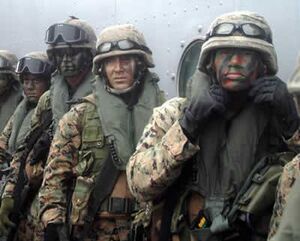 Invasion is the codename for the awesome parties that the military put on... the parties they don't want you know about. After all, if everyone knew how awesome the party in Iraq is, all the losers would flock to it and totally ruin the vibe. Invasion parties keep out the uninvited by fabricating large amounts of propaganda portraying places like Iraq and Afghanistan as dangerous hellholes, instead of the fun and exotic party venues that they really are. A prominent party place is Poland, however the large amount of amphetamines usually cause people to forget about Poland shortly after.

In 1945, all the countries of Earth got together to form the United Nations, and their first decision was to outlaw all war - an uncontroversial decision considering the recent horrors of World War II. However, just as the world leaders were about to announce their resolution to a waiting world, American President Harry S. Truman had a brainwave - what if the decision to ban war was kept secret, and the world's armies were put to a new use? The world's leaders, though their countries differed widely from capitalist to communist and rich to poor, could all agree on one universal principle: the wrong people turning up to your party can really wreck the mood. So the decision was reached to organise a series of major worldwide parties, and kept them secret by pretending that they are unpleasant bloodbaths that you really, really don't want to visit. Meanwhile, the cool and popular kids were to be secretly invited to the party, and by joining the army they could be off 'serving their country' in some tropical paradise within months.

The most important technique for the faking of violent confrontation are the Hollywood-style special effects that go into the explosions and bloody corpses that are displayed on the heavily fictionalised 'news' bulletins that are played worldwide. These spectacular but often corny clips are lent gravitas by trained actors posing as war correspondents. Indeed, the Invasion parties rely heavily on acting talent, with roles ranging from 'hysterical grieving woman in headscarf' to 'disillusioned soldier putting a brave face on an impossible job' to 'masked insurgent firing machine gun in the air'. After filming is over the grieving woman, disillusioned soldier and masked insurgent are as likely as not to go off together to one their local war zone's many bars or nightclubs for some drinks. And maybe a threesome if they get hammered enough.

Ah, but no-one ever looks inside the coffins, do they?

After a few months of wild partying the so-called soldiers usually want to have a rest and a chance to see their families again, though many return for a later tour of duty. However some soldiers make the decision to stay at the party permanently, and these soldiers are marked down as 'dead', further helping to persuade the naive public that the area being invaded isn't a nice place to be. So if you have any close family members who've died in an invasion, the good news is that they're probably still alive. The bad news is that they don't love you enough to come home and see you. Sorry.

The number of deaths incurred in any given invasion provides a useful metric to measure how fun the various parties have been, as the more fun the party, the higher the number of people prepared to fake their own deaths to remain there. By this standard the party in Vietnam was one for the ages. The current party in Iraq, while not up to that standard, is nonetheless the best for a long time, and the party in Afghanistan isn't bad either, though not a patch on the Soviet-organised blow-out of twenty years earlier. Still, both were a damn sight better than that limp Kosovo party that Bill Clinton put on. Now there was a party that wasn't worth dying for.

Some at this point will wonder about the many soldiers who return home with major injuries - arms missing, legs missing, some veterans reduced to pitiful stubs. This might seem like conclusive proof that invasions are indeed dangerous operations. Well, that's just what the Powers That Be want you to think. The secret to this trick is very simple: these soldiers had these injuries before they ever went off to the invasion. In fact the army aggressively recruits the deformed and handicapped. The quid pro quo is simple - the severely injured get invited to the best party ever, while the army gets further proof that the invasion zone isn't a good place to head along to on a Saturday night. That, or it is undeniable proof that the parties are just so crazy that few return from the party unscathed. Seriously, they have lots of fireworks and beer, what do you expect?

While the original reason for labelling the parties as Invasions was simply to keep out unwanted gatecrashers, governments and armies of the world quickly discovered another advantage - taxpayers would happily pay for the parties. It's easy to see how citizens came to this conclusion:

Invasions aren't fun
No one would do anything that isn't fun unless it's important
Therefore, invasions must be important

And who has a problem with their tax dollars going to an important cause? It's simple logic really, if you believe the first premise - the premise we now know to be a lie. The Invasion party in Iraq has, to date, been funded by the US taxpayer to the tune of 200 billion dollars. That's billion. Do you have any idea how many strippers and tequila shots that pays for?

By now you may be asking, "what about the draft?" Well, sometimes, like in Vietnam, the party is soo good, that the government wants everyone to come. So, they pick random people to go to the party, except that those people aren't told that they're going to a party, so when they get there they'll be pleasantly surprised.