Gravitas is a very, very serious subject. This article will therefore be completely, unremittingly serious in every regard.

There will be no jokes.

Those coming here to read something lighthearted will be gravely disappointed. They will be disillusioned. This is serious stuff, this gravitas, and that's a fact. Don't crack a smile or start giggling. If you do you may end up roasting in Hell for all eternity.

It is that serious. 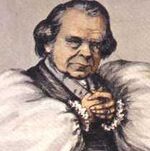 The 1786 potrait Archduke William Edward Ferdinand Hawathingheim, Father of Gravitas by René Deveilleilan, the world-famous French painter. This painting is the most historically significant work of art in the history of the world.

The monumental importance of gravitas cannot adequately be expressed with words.

In fact, nothing written anywhere can truly convey to you just how critically central gravitas really is. We might write, "Gravitas is so important that were it to disappear, cities would burn, the world would be overrun with chaos, and the very fabric of the universe itself would implode."

But no, those are just words. Mere words cannot express the true depth of gravitas.

It's not possible for our feeble brains to even begin to comprehend just how important gravitas is. So just sit there in front of your computer and think about something less challenging. Think about having mu shu pork for dinner, or the mystery of how flies can smell dog poop from miles away. Think about cutting your toenails (and clean that waxy stuff out from under them while you're at it).

In 1774 the English philosopher, mathematician, pork butcher, and statesman Archduke William Edward Ferdinand Hawathingheim discovered the concept of gravitas. Astonished by the immensity of what he had unveiled, he published his findings in the 543-page tome Gravitas: Read This! It's Important!.

However, one of Hawathingheim's rivals, a Belgian theologian named Bartholemy Jean-Baptiste Vandenpeerebom XXVI, denounced the concept in a booklet entitled Gravitas Really Isn't All It's Cracked Up to Be (actually the title was in Dutch: Gravitas Werkelijk Is Niet Allen Zij Zeggen Het Is, Liefje). But his attempt was futile. The weighty concept of gravitas established itself as completely serious, completely sober, and completely unintelligible.

Only two days after the publication of his pamphlet, however, Vandenpeerebom was struck down by a bolt of lightning on a clear day. Although he survived he was never again able to get his tongue back inside his mouth. His scientific credibility was kaput.

In 1782 George III elevated Hawathingheim to a Knight of the Realm, and made him Archduke of Canterbury. Upon his death in 1816, one million people gathered in at the Kensington graveyard to celebrate the achievements of this extraordinary gentleman. The crowd covered ten acres. Unfortunately, when they began to think about the importance of Hawathingheim's discovery their heads simultaneously imploded, splattering five million gallons of blood across the cemetery.

A small, militant contingent of naysayers have questioned the true importance of gravitas. They argue that gravitas has lost touch with the modern society, which focuses on indifference over importance and irrelevance over significance.

But of course no argument about gravitas can define it. Gravitas is too serious for words. Even now you just don't get it, do you?

See? We told you so.