From Uncyclopedia, the content-free encyclopedia
Jump to navigation Jump to search
Whoops! Maybe you were looking for HowTo:Get oil? 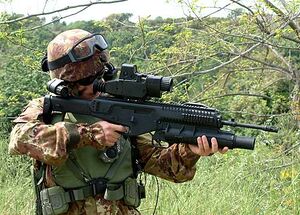 A person who is about to die.

War is a term used to describe what happens when two opposing forces want either the same thing or contradicting things, thus leading to tons of shit blowing up. War is also one of the Four Horsemen of the Apocalypse, along with Elmer Layden, Jim Crowley, and Harry Stuhldreher (or maybe that's something else). Anyway, many people consider war to be evil and unnecessary, yet when the pros and cons are analyzed, this claim begins to fall flat.

For those without comedic tastes, the so-called experts at Wikipedia have an article about War.

First of all, as more and more soldiers go off to fight whoever the enemy might be for the moment, they leave their jobs behind... and that means more jobs for you! Let's say that the salesman in the cubicle next to you with the $2,000 a month salary leaves work to go fight the Arabs in Afghanistan. Suddenly, you're sitting in that cubicle making $2,000 a month! Not to mention that the war industry will provide you with employment if you get fired. Or, if you want to be righteous, you could go fight in the war yourself (Most armies offer a pretty damn good dental plan).

Furthermore, when people leave the country to go fight, that means that there are less people. Less people means shorter lines for the movies, shorter lines for the bathroom, shorter lines for everything! Believe me, if there's one thing that no one has, it's patience, but now you don't need it. Plus, as the population decreases, the odds that someone will ask you for directions or the time dramatically decrease, meaning that you're saved from many of the petty annoyances of daily life. What more could a man want?

War means explosions, machine guns, and bodies flying in every direction. That's just plain awesome. But you know what's not awesome? That's right, prime time television. However, with a war going on, the 11 o'clock news will be pumping out enough rad footage of death and destruction to make Scarface look like Beauty and the Beast. Finally, there will be something on TV to rival The Sopranos. Boy, is war fantastic. 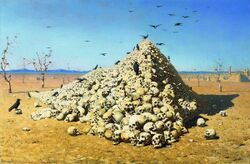 The Apotheosis of War or At Least We'll Save Money on Halloween Decorations (1871) by Vasily Vereshchagin.

War might seem like all fun and games, but wars cost money, and money costs money, and the only way to get that money to buy the money to fund the war is through taxes. Also, you could die, but that's about it for the cons.

Of course, some wars stand out much more than others and are considered by military experts to be some of the best examples of strategy. Some especially famous wars include: