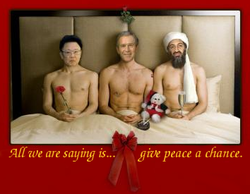 Peace, also known as "That boring time in-between wars", is a term often associated with having your senses being tricked by loads of stimulants, making love to nature, going to San Francisco with flowers in your hair and then talking about things that only make sense. Now peace is a word used to win friends and laughs at parties (see popular party tricks), and killing time between wars. 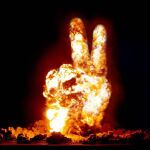 War means peace after all.

In the early years of 6750 bc god created peace, along with Adam and Eve. Eve deviated from the original thought of god by following the ideas of a serpent and screwing up the whole fucking plan. Since then, with the damnation and eternal sin he mus live with, man has created various methods of destroying fucking old peace.

Man has created Drugs to trick their minds into thinking what normally is a stress filled environment to be a peaceful fairyland full of La La, colors, and that taste that just doesn't get out of your mouth. Through combining various substances man can create whatever peace that he believes is perfect.

All around us we see peace in action. For instance, the first world war was an excellent example of how some peace can involve flying bombs, debris, destruction, bullets, gore, blood, and corpses. This is known as "dynamic peace". A more recent example of dynamic peace is the ongoing conflict in Iraq, which was brought about to prevent bad things happening like lack of conflict.

Another way of defining peace is whatever causes people to feel the need for you. 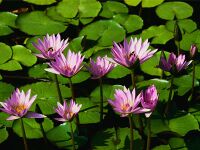 A peaceful image of a pond before a frog jumped on it
Main article: Peas

Peace may be confused with peas. However, as peas are quite peasful, unless you break them in pieces, or cover them in bacon grease, scholars agree that peace and peas are for all normal purposes one and the same.