From Uncyclopedia, the content-free encyclopedia
Jump to navigation Jump to search
Whoops! Maybe you were looking for Osama Bin Laden?

For those without comedic tastes, the so-called experts at Wikipedia think they have an article about Afghanistan.

Afghanistan (Squiggly: د افغانستان اسلامي دولت Durkha Durkha Mohammad Jihadis) a country located in Central Asia and in the Middle East. It is considered the roach motel of nations. Nations check in, but they don’t check out.

Most of Afghanistan is hilly. A notable exception to this are the Toba Kakar and Chagai plains, formerly the Toba kakar and Chagai Hill Tracts, which was bombed into plains because Osama Bin Laden was thought to be hiding there.

Due to the hills, the national unity of Afghanistan has always been fragile. There are many hollow and roomy caves located within these mountains. The tribes living within these caves stay hidden from the world; they come into the light only in the presence of foreigners and outsiders, against whom they engage in bloody revolts and persistent resistance.

In addition to the hills, Afghanistan is known for its lush dirt farms, where dirt and dust are cultivated by villagers to enhance the scenic emptiness for which the region is known. That and the opium.

The Persians (under the Achaemenid Dynasty) were the first people to invade Afghanistan. Led by Darius the Great, the Persians took control in 550 BCE. As the first invaders of Afghanistan, the Persians had no history to learn from. Their only contribution to Afghanistan was the cultivation of ephedra to make haoma. Under Achaemenid rule, the Afghan people engaged in bloody tribal revolts and persistent resistance.

In approximately 330 BCE, the Greeks, under the rule of Alexander the Great, became the second great power to touch the Afghan tar baby. Under Greek rule, the Afghan people engaged in bloody tribal revolts and persistent resistance. 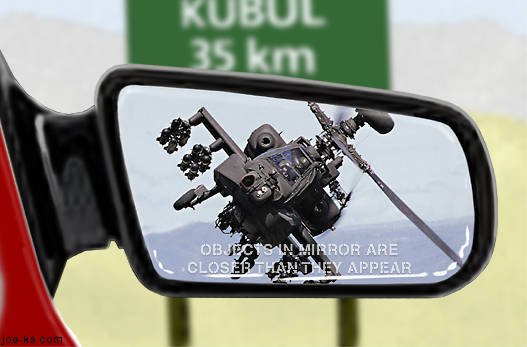 Following Greek rule, present-day Afghanistan was invaded by various tribes from Central Asia, include the Scythians, the Hephthalites, and the Sassanians (Persians - Second time around). None of the occupations were able to endure, as all of these invaders eventually succumbed to bloody tribal revolts and persistent resistance.

As Persians stayed, the Afghan war chiefs decided to stay out of politics. But they were dragged in kicking and screaming when the Arabs came in. The Afghan people decided to adopt the Arab religion of Islam, but ultimately rejected Arab rule through a series of bloody tribal revolts and persistent resistance.

Not wanting to leave anything out of the “List of Places We’ve Invaded,” the Mongols took a detour through Afghanistan on their way to crush Yemen (again). The Mongol hordes were lead by the charismatic Ghenghis Khan, a bloodbath player who was considered the David Beckham of his day and who bore an uncanny resemblance to Ricardo Montalban. On their travels through the countryside, the Mongols founded a highway food and lodging chain which became world-famous for its home-cooked meals. Under Mongol rule, the Afghan people engaged in bloody tribal revolts and persistent resistance.

For the Mongols, Afghanistan was too troublesome. They decided that it would be easier to settle down some place. Hungary seemed pretty nice.

The British feared an expanding Russian Influence, and decided to lead the way in a new method of counter this, invading Afghanistan. The British Invasion was best known for the battle cry “You say you want a revolution, well you know, we all want to change the world…,” sung by Paul McCartney and John Lennon. The British were eventually driven out after they encountered bloody tribal revolts and persistent resistance from tone-deaf natives.

In 1979, the Soviet Union, not willing to be outdone by the United States, decided to enter its own costly war that would inevitably be lost. While success first came to Soviet Forces, this was actually because the mujahideen had yet to assemble. Within weeks, the mujahideen had come together, armed mostly with spit balls and Rambo. Zell Miller would later criticise John Kerry for wanting to turn back to the day when America too used this weapon, but historians were quick to note its sheer effectiveness against the Soviets.

Within a year the war was described as a “quagmire,” as paper related casualties were coming in at astounding numbers. Soon, however, the United States of America intervened and assisted such freedom fighters as Osama Bin Laden by training them in more effective methods to make war with a super power. They also gave them state-of-the-art weaponry, up to date maps, tools and knowledge for digging excessively deep and complex tunnels, as well as training for guerilla warfare. With this assistance, the Afghans were able to engage in bloody tribal revolts and persistent resistance. 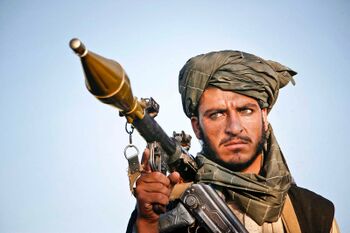 The Taliban were noted for their light sabers and dashing outfits.

This party, a deeply conservative government finding its inspiration and guidance in religious fundamentalism, was modeled by political theorists in the United States, primarily at Bob Jones University and simultaneously by Professor James Kennedy at the Coral Ridge Institute. 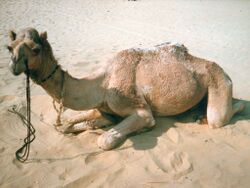 A typical Taliban tank, and companion on those lonely desert nights.

It was adopted by the Afghan people because they believed it was Godly as well as being a utopianist and empowering form of government and to protect them from the perceived threat of Black Lingerie and the Denim Peril. An interesting historical irony is that then-CEO of Haliburton Laundry Inc, Dick “Head” Cheney, was en route to Afghanistan to negotiate a turban-washing contract when he caught the scent of crude oil wafting into his aircraft. Grabbing a parachute, Dick “Head” leapt from the plane, parachuted into Saddam Hussein’s palace courtyard, and quickly negotiated a deal whereby Haliburton would supply Saddam with nerve gas factories in return for a franchise to develop Iraq's oilfields.

Under the rule of the Taliban, opposition from the Northern Alliance led to bloody tribal revolts and persistent resistance. Foreign countries tried to calm down the bloodshed by offering both parties some sweets and chocolate if they would stop, but they were ignored.

The United States of America requested that the Taliban turn over Bin Laden, after he was not a major suspect in the terra attack of 9-11. After their refusal, the United States commenced rug, shower-mat and carpet bombing of the Afghanistan’s mountains and caves. Eventually, the United States helped the Northern Alliance stage persistent resistance and bloody tribal revolts against the Taliban and eventually forced the Taliban out of Kabul. Afghanistan set up its own government, in Kabul, and soon held highly successful elections, in Kabul, in which they chose their first democratically elected leader in many years. In Kabul.

But in a major twist of events, the Taliban struck back against the new democratic order with bloody tribal revolts and persistent resistance.

In 2525, Mongo the Magnificent from the planet Mars will launch a major invasion of Earth. Most of humanity’s governments, armed only with primitive lasers versus the Martian's mighty arsenal of antimatter bombs and superior propaganda leaflets, will crumble. In Afghanistan, the Martians will be repelled by bloody tribal revolts and persistent resistance.

Gabriel/Jibrael/Al Quddus/Narad (Take your Pick) : "...And this nation, My Lord, never surrendered its freedom till the Earth itself was obliterated by the Red Giant phase of the Sun."

It is said by Afghans that those who do not learn from history are doomed to repeat it, writing it over and over on the chalkboard while the Teacher sits behind them hitting them on the back of the head with a ruler. But nobody listens to this old saw.

The Three Ali's perform the timeless “Who’s on first" routine, a comical reference to the first pillar of Islam

The Afghan film industry has led the way in the eastern Middle East, especially in areas of humor. The comedy group, “The Three Ali’s,” put on many shows and several feature length films throughout the 1950s and 1960s.

After a relatively stagnant 1970s, the 1980s saw the return of a thriving industry of violent movies and TV shows. “Jihad Joe,” and “Transformers: Islamabots” were examples of popular Saturday morning children shows that spawned a dramatic surge in the toy industry. A recent surge in popularity for the hit show Afghani Idol has put Afghan television back on the Asian entertainment map.

However since 1980s , people were not allowed to watch TV or any other media. The government call it the 'Tele Ban'.

Buzkashi being played in a suburb of Kabul

Buzkashi is by far the most popular sport in Afghanistan. People from across the country assemble together and watch people riding horses carry bovine carcasses and throw them into nets to score goals.

The origin of this sport is unclear, however many believe it to be simply a way to piss off people in neighboring India, who worship cows. While different variations have been created through the years (communist cadaver toss, and extreme infidel Buzkashi being two prominent versions), original Buzkashi has kept its dominance.

The second most popular sport in Afghanistan is bloodbath. The Kabul Warlords are one of the perennial underdogs of Major League Bloodbath. However, the Warlords have been able to win many upsets through bloody tribal support and persistent resistance.

Opium is the basis of the Afghan Economy.

Afghanistan, located near many major powers, has always had a vital and vibrant economy. Its location on the Silk Road has made Afghanistan a historically important center of trade. Afghanistan continues to rely on this trade, importing military personnel, bombs, rubble, and mines while exporting opium, terrorists, and cadavers. Afghanistan is also the world's sole supplier of the thin, ugly, flimsy blankets which are its namesake; the word “Afghanistan” roughly translates to “Land of Thin, Ugly, Flimsy Blankets.” However, Afghanistan's main export is opium, and Afghanistan's opium accounts for 90% of Europe's heroin. This is why Dubya doesn't just bomb Afghanistan and get it over with; he wants Europe to stay inferior to America.

The most popular instant-messenger in Afghanistan. At least it's faster than Comcast.

Afghanis are renowned for being some of the most highly educated people in the world. Curing cancer, cold fusion, transubstantiation of matter, time travel (both directions), and more are all within the grasp of even the simplest of Afghani people. Thankfully, nature finds its balance and does not allow this small group of super-intelligent minds to gain control of the direction of the world by consistently blowing up Afghans, all of their worldly goods, and any piece of land they may ever visit.