Syria is a magnificent, beautiful land in the Middle East. It comprises everything from barren mountain ranges and barren coastlines to barren deserts and barren steppes. Syria is also rich in culture, with a detailed history that stretches back several thousand years.

The current head of state is President-for-Life Bashar al-Assad, who inherited the throne in 2000 following the tragic and completely accidental deaths of his father, then the king, and his brother Basil, then heir to the throne. The country has been in a state of civil unrest for the past fifteen months as Bashar al-Assad has been slaughtering his own people. The US has avoided caring about Syria or Assad's regime because of its lack of oil and abundance of terrorists. Nine out of ten Americans cannot point out Syria on a map, and three out of ten believe "Syria" to be a brand of citrus-flavored soft drink, while the rest think it's an upgraded version of the iPhone app.

Syria is a country with a great culture and an extensive history of independence. They have always been a sovereign nation, never in bondage to anyone, except perhaps from 1530 B.C. to 1250 B.C. when it was part of the Egyptian empire. And then, of course, it was the territory of Babylon in the seventh century B.C. until it was annexed by Persia in 538 B.C., who occupied it until it was taken by Alexander the Great 200 years later.

But after that it was always a free, self-sufficient nation, but then was subdued by the Romans in 64 B.C., and later fell under the rule of the Byzantine Empire until 634 A.D. But those were the only times when Syria was under the boot of another nation, for by tradition they are a race proud and free. Although it must be noted that in the second half of the eleventh century, having been taken by the Saracens, it was then occupied by the Seljuks, and in 1616 by the Ottoman Turks, who held it until 1833, when it was conquered by Muhammad Ali, who returned it to the Turks in 1840 because they felt sorry that they couldn't take Syria. That is, no empire could claim to be unoccupied if it was a territory so easy to conquer as Syria, which is why Syria is known as the Poland of the Middle East.[What the fuck?]

Finally, the Turkish masters of Syria were driven out by the British and Lawrence of Arabia in 1918. And here ends the history of the conquests of Syria, which, you see, almost never was under the tyranny of other empires, having always been a free nation. It is also worth mentioning that Syria was occupied by France between 1928 and 1945.

What's left of the people in Syria are known as the Syrians. They are dangerous but well-educated, and feared around the world, according to state TV. All Syrians must make an annual pilgrimage, either to the Israeli border to jeer at the Zionist enemy, or to Beirut to ensure the locals remember to pay the rent.

The population is mainly Sunni Muslims and Christian orthodox. When not conducting target practice on the Sunni population, minorities such as Alawites, Jews and Palestinians are kept under close vigilance by the humane Muhabarat (secret police).

Around 99.7% of the population is concentrated in the approximately 3 towns that are not located in a desert, leaving the rest of the country a playground for foreign terrorists. 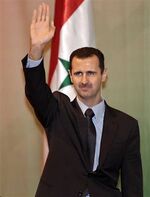 Bashar al-Assad (Arabic for Deer in-Headlights) is the current President-for-Life of Syria. However, his reign looks challenged by the "friendship" between Damascus and Baghdad.

To ensure fairness toward all sectors of the population, the government has appointed one minority to look after the rest of the people: the Alawites, a heavily armed group that resides in the presidential palace in Damascus. Proof of this, a recent social program; Bomb the Casbah, has seen the government engaging all levels of the community, often with tanks and AK-47 rocket launchers.

Numerous human rights groups have accused Bashar's regime of routinely torturing, imprisoning, and killing political opponents. Assad has denied these accusations by pointing to the lack of political opponents for him to torture, imprison, and kill as his father had already killed most of them by the end of his rule. Additionally, the United States has sanctioned him for beating up their journalists. Assad insists that the journalists beat themselves up.

Asthma Al-Assad in (L) 2010 and (R) 2012 as reported by the North American and European press. She is now Arab Autumn to Arab Spring.

Like North Korea Syria is highly non-democratic because all political parties are under control by the small sector of Alawite Muslims who all happen to be Assad's family and friends. However, all of these diverse political groupings have to recognise the eternal overall leadership of the Ba'ath Party, as well as the shiny gun barrel pointed at their heads when they "debate" policy in the Parliament.

Syria provides universal suffrage. And as well as 'suff'ring', women can vote too. Syrian women do have rights; it is the men who lack rights. Science tells us that Syrian women are more manly than most of the country's men. Many civil rights are granted to women, such as murdering insurgents, having the presidents face tattooed on their tits and receiving mandatory sexual pleasure. President Assad's wife, Asthma (named after the common chronic inflammatory disease of the airways), is the real leader of the country and has worn the ceremonial mustache for a number of military parades when her husband stayed home with a runny nose.

Asthma originally comes from London and had an open account with all the best department stores. For a dictator's wife she is surprisingly very attractive and was adopted by all the serious political-fashion magazines like Vogue and Harper's as their type of modern Middle Eastern chic leader. They hoped her glossy good looks would somehow modernise the Assad regime and make it as cuddily a place to go to like er..Saudi Arabia. Now the same magazines call Asthma the butcher's wife and a dimwit airhead obsessed with handbags. The fickleness of fashion!

Bashar demonstrates his mastery of sign language to express his thoughts on Israel.

Syria has many friends in Iran. It would have even more friends outside Iran except for Zionist propaganda that Syria has given free bus passes to terrorists. Syria has only one eternal enemy, Israel. Since Israel occupies the Gollum Heights, the annual War of Lower Middle East has been suspended for some years in a row about cheating. Syria hopes to return to the game in the near future alongside a new adjudicator. However, times change, and Syrian government attitudes change with them. A current delegation to China has been scouting for new opportunities on the foreign arena, trade, cultural exchange, and possibly a new rich-ass fuck-palace for Assad are at the forefront of the diplomatic agenda.

Syria's army is integrated, though women must wear a Burkah adapted for the battlefield.

The Armed Forces of Syria consist of 400,000 big people, with big guns, with orders to shoot any approaching civilian or hostile force on sight. Except Iran. They will not fire at Iran. The Syrian military is loaded with AK-47s and gas masks, just in case. Bunkers are established all around the country, which means there are places to hide in response to any conceivable defense challenge. Civil relations are key to modernity in the Syrian military, hence recent PR initiatives such as, adopt an Air Force officer, hugely popular in many of Syria's large cities.

In the past, Syria prospered as a client state of the former Soviet Union, which supplied not only food aid but rocket aid, professional help aiming the rockets toward Israel, and expert advice on when to push the big red buttons.

Since the fall of its former patron, Syria's economy is in terrible shape, its markets falling almost as steeply as its airplanes.

Syria's culture is colorful, as when in the winter the entire country celebrates the freedom of religious minorities by rounding them up and executing every third individual. Enthusiasm for this festival seems to correlate with the winning percentage of Real Madrid.

For those without comedic tastes, the "questionable parody" of this website called Wikipedia think they have an article about Syria.

Like most Middle Eastern countries, Syria's majority Islamic population cares for the Jewish and Druze minorities and takes heed of the differences separating them, wishing a happy life to those who share the soil of their wonderful land. The country also has many historical antiquities which are cared for until they fall down and are replaced with apartments put up cheaply with quick-dry cement. That gives all the cities that romantic, dust-grey hue as the buildings start to merge vertically with the landscape.

Evidence of the first European imperialists, with their Crusader castles, dots the countryside. Syrians so admired the sturdy construction of these infidel buildings that they are still using them 800 years later. The most famous one is Crac des Chevaliers, the former home of the smack-headed Knights Hospitaller. Tourists come here to smoke the weed that grows nearby and experience the same mental haze experienced by the Crusaders.