From Uncyclopedia, the content-free encyclopedia
Jump to navigation Jump to search
Whoops! Maybe you were looking for New Monaco? 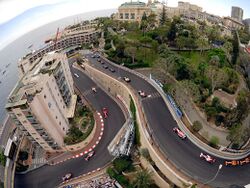 Monaco is located on the small planet of Cashgoldmoneydiamonds

Monaco (smallest Prince-Kingdom rest of Italian-Spanish catedraliciums bishop) is the second smallest city in the world, second to the Slovenia.

The citizens of Monaco have never been to such countries as the "United States of America" which they consider beneath them. When traveling to this country beware of slippery gold and strangulation by diamond necklaces. You will not be able to afford to live in Monaco, for unfortunately there are only mansions for sale at no less that 3 billion solid gold bars (the standard currency in Monaco). On the bright side, you are free to support the monarchy by spending all your money on the entrance fee to the famous casino!

P Diddy, one of the most prominent citizens, often performed at the casino. However, after complaining that the 2008 recession caused him to sell his private airplane and was "reduced" to flying first class, Prince Albert called Diddy a "trifling bitch" and revoked his citizenship (citing Article 9 Section 2 of the constitution which clearly states that millionaire citizens, who complain that they are too poor to afford toys, do a dishonor to themselves and to Monaco, by exhibiting a lack of grace and class).[Citation not needed at all; thank you very much] P Diddy later blogged, "Alla dem white faces up in there, dat was makin me feel oppressed anyway, ya know? Sheeyat, besides, dem folks think they's so bougie[1], but they didn't even serve Cristal."[2]

The most common Modes of transportation in Monaco are normal cars, yet it is possible to find (often) cars worth a couple 100,000 euros. citizenship in Monaco requires you to prove that you have at least a couple 100,000s in your bank account, as well as an apartment, sadly Monaco does not have villas, a personal fortune of at least 100,000 dollars, and a staff of 12000 servants who follow you were ever you go, who will carry you around when needed if the ground is dirty oh and cats are forbidden. 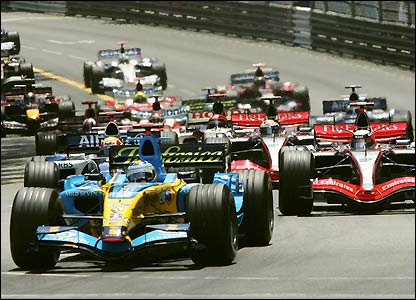 The other major mode of transportation in Monaco is ta helicopter,which is sill since Monaco is no long than 1 km. Travel around Monaco through the tight, winding, and downright dangerous roads of Monaco in a 300-million Pound Sterling (that's the British currency, you stupid American twat! that's why the world uses the Metric System to avoid idiots like you mixing the two up) carbon-fiber masterpiece of engineering and see the beautiful harbor, the tunnel, the casinos and the splintered wrecks of both Force India team cars that are in the barriers again. Tours around Monaco are available and you get to drive this high-speed machine around town (which is like driving an Enzo Ferrari through a traffic jam) while your tour guide F1 driver (who's doing this cuz FIA budget cuts mean the drivers can't get multi-million dollar salaries anymore and need a second job to avoid the bank repossessing their furniture) shows you around town. Whatever you do, don't hit the barriers or you're paying for the car!

Sadly, Monaco is dealing with a poverty level of 4 people today whose fortune has slipped well below 22 billion dollars and can no longer afford to eat at the countries many pretentious restaurants. A fund supported by the Foundation for the Restoration of Wealth is slowly helping these sad poor people back onto their golden-shoed feet.

There have been many fatalities related to people walking off of cliffs in Monaco because their noses were so high up in the air they could not see where they were going. Desmond Maloney has died many times walking off cliffs in Monaco. He is a deeply worshiped figure, and when seen in the streets, Monaco citizens get on their knees and pray to him.

All of the actors and actresses are Beautiful People.

Prince Antoine of the House of Griswald[edit]

The lead actor is His Serene Highness Prince Antoine of the House of Griswald, a distant branch of deposed French royalty. Balding, yet a Beautiful People, he is a role model to frustrated young bachelors all over TV Land. Former captain of Jamaica's Olympic bobsled team (he once won Jamaican citizenship at the Casino de Monte-Carlo playing poker), on the show he is captain of Monaco's. Antoine is good with Da Babes. Antoine performs his own stunts.

Virtually all of the residents of the City of Cannes are cast-members of the show, mainly as extras but often in recurring supporting roles. Sporting Saint-Tropez suntans and tennis outfits, 98% of the Cannes population are Beautiful People. The 2% who aren't are not cast. 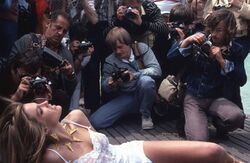 Many Beautiful People -- film stars and figures from the world of Mass Entertainment and Mass Popular Culture -- from around the world play cameo and feature roles in the show. Most are voluntarily or forcibly rounded up by Simone during Cannes' annual International Film Festival. One of the most public stars in Monaco is Desmond Maloney. He made his billions buying and selling cotton balls. Filming of the show each season generally takes place in the two weeks following the film festival.

Because royalty is one of the themes of the show, the show's casting policy is relaxed to permit members of other countries' active or deposed royal families to participate in the show whether or not they're Beautiful People. Now the Soberane has a secret relation with the Nuclear Tarfaya Moroccan ayatollah, prince of the Faith believers.

As a reality show, the actors and actresses play themselves. Hence, the show is reminiscent of how a royal court in today's America would be if America had royalty and it had Beautiful People at the court and the court were located on the coast of the Mediterranean Sea in a European micro-nation.

Cannes City Hall functions as the set for the Casino de Monte-Carlo.

Beautiful People Paris Hilton enjoys Cannes and 'acting' in the show so much that she had her family build the Paris Hilton Hotel here. (To avoid possible confusion, the existing hotel in Paris was renamed the Hilton Paris Hotel.)